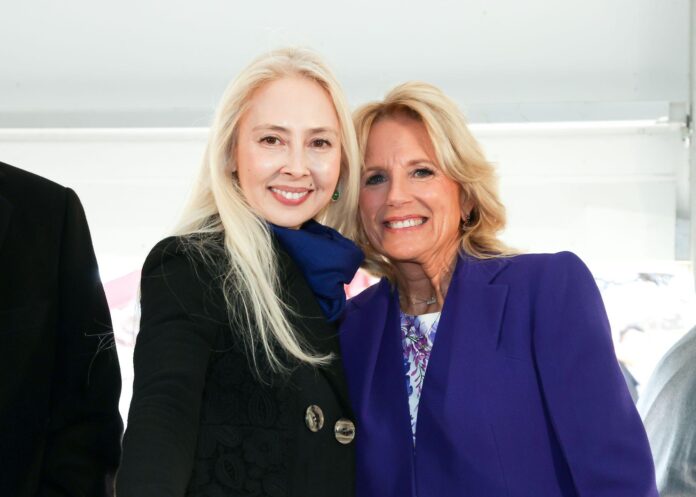 Nothing livens up a Washington, DC groundbreaking ceremony quite like a go-go band, especially a band proficient in the city’s homegrown musical genre that manages to namecheck Grammy-winner Laurie Anderson, US First Lady Jill Biden and “my man Jeff Koons” in song.

The Smithsonian’s Hirshhorn Museum and Sculpture Garden threw a festive groundbreaking party for its controversial sculpture garden renovation on Wednesday (16 November) that combined the top-shelf DC offerings (jazz-funk go-go music and First Lady Jill Biden) with international art stars (Anderson, Koons and Adam Pendleton). While architect Hiroshi Sugimoto did acknowledge that his design for the project has been controversial, and at one point seemed dead in the reflecting pool water, the mood was celebratory, with sparkling wine offered to each guest who passed through the metal detectors, even though it was November and barely noon.

Each guest on the dais got a shoot-out from The Jogo Project, the band providing walk-up music in the garden. At the podium, speaker after speaker emphasised the need for the nearly 50-year-old garden to serve as a performance venue.

“We see how the most important artists of our time are working today across every media, and exploring technology and innovation in every form, from sculpture and video to sound and performance,” said Hirshhorn director Melissa Chiu. Hence, she added, “our need to evolve this garden for its next chapter”.

Smithsonian secretary Lonnie Bunch offered more egalitarian reasons for the evolution of an underused “fixture on the mall”. The goal, he said, “is to transform this garden into a space that better accommodates larger audiences and certain performances, in essence, to make the Hirshhorn more accessible to the millions of people who stroll past it on the National Mall”.

According to the Smithsonian’s pre-pandemic numbers, the Hirshhorn’s garden typically attracts only 150,000 visitors a year, while 3.2 million people stop by the National Air and Space Museum next-door.

In spring 2023, the garden will close for what it expected to be a two-year “revitalisation” project that will replace the sunken modernist garden with three distinct areas, divided by new stacked-stone walls, for a collection of around 30 pieces of modern and contemporary sculpture, time-based and performance art, and large-scale commissions.

Sugimoto, the Japanese photographer, artist and architect, served as designer for the project, which had drawn criticism from groups like the Cultural Landscapes Foundation and others who wanted the original design by Gordon Bunshaft, revised by Lester Collins, preserved. Other detractors sat on the National Capital Planning Commission, where a representative for the federal General Services Administration compared Sugimoto’s mockup images of stacked stone to something “that just reeks of Olive Garden [the chain restaurant] and that is not a good look on anybody”.

Opposition prolonged the design and approval process by two years, a delay that Sugimoto addressed.

“I was amazed by the backlash against my vision,” Sugimoto said to a crowd that responded with nervous chuckles. “There were many times when I thought this project was dead, however, Melissa [Chiu] encouraged me to push forward, and she was right. Now I’m standing here at the groundbreaking ceremony.”

In a statement Wednesday, the Cultural Landscapes Foundation founder Charles Birnbaum said that despite some revisions, Sugimoto’s plan “unnecessarily sacrificed” the original “purposeful and unifying limited material palette that was embraced by Collins and Bunshaft at this rare Modernist icon on the National Mall”.

The keynote speaker for the day, however, did that thing her husband often talks about doing: unite America, or at least, unite the several hundred guests present to agree on the value of contemporary art. Biden, who still teaches English at a suburban community college, shared an eloquent account of her recent trip to see the Alex Katz retrospective at New York’s Guggenheim Museum.

The visit followed a round of “midterm campaigning” in New Hampshire, she said. The first lady’s day ended in New York City. “It had already been a very long day,” she said. “But I didn’t feel quite ready to go to my hotel. I needed something more than rest.”

So she went to the Guggenheim. “As I walked through his works, I felt myself breathe out,” Biden said. “I stopped thinking about tomorrow’s politics and the speeches I would give and the papers I still had to grade for that other job. And instead I found myself cooled by the ray of blues that surrounded me, warmed by the walls of sunshine yellow, lost in conversation with each pastel person who stared back at me from the canvas.

“I was nowhere but present,” Biden said. “In a world that asks us to sprint from moment to moment, from meeting to meeting, art stops us in our tracks. It feeds our spirits when we’re hungry for something more. It shows the contours of our joys and our sorrows, so that we know that we aren’t alone.”

She went on to invoke the words of Lady Bird Johnson, the wife of president Lyndon B. Johnson and an early champion of the Hirshhorn when it opened in 1974. Biden said the present project would open up the Hirshhorn sculpture garden “in more accessible ways” so that it can become a place where Washingtonians and visitors to the nation’s capital could have transformative experiences like she recently had a the Guggenheim.

“Why don’t we visit this garden just for a moment?” Biden said. “Let’s stop for a while and contemplate what lies beyond the limits of our imaginations.”

For Chiu, the ceremonial groundbreaking brought a sense of closure more than a sense of new beginnings. After hobnobbing with donors, arts administrators and diplomats for an hour while the go-go band played, she paused on her way up the ramp leading back the museum. “It was a fantastic end to the design process,” she said.

As the garden project finally gets underway, her museum is already plotting its next construction project, an ambitious revamp of its distinctive doughnut-shaped building and outdoor plaza.