Home News A School Group on a Field Trip Near Tel Aviv Stumbled on... 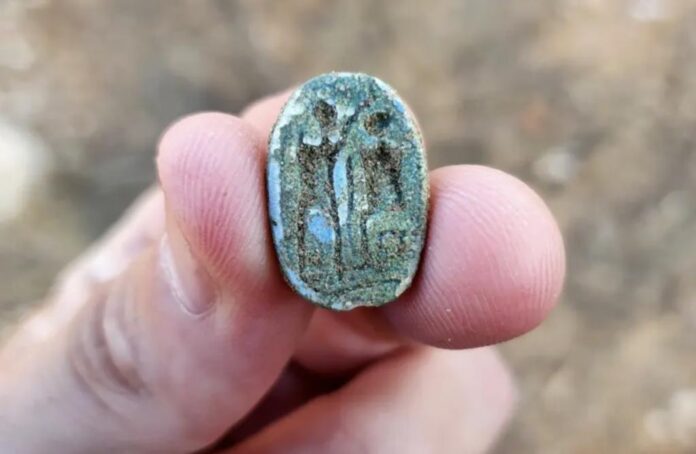 Students on a field trip hosted by the Israel Antiquities Authority (IAA) in Azor, five miles southeast of Tel Aviv, witnessed archaeology in action when the group’s leader Gilad Stern happened upon a 3,000-year-old amulet.

Stern was guiding eighth grade students on the IAA’s third annual expedition, educating them about archaeological finds around Azor and beyond, when he saw what first looked like a lost toy on the ground. “An inner voice said to me, ‘Pick it up and turn it over,’” Stern told the Jerusalem Post. “I was astonished: it was a scarab with a clearly incised scene, the dream of every amateur archaeologist. The pupils were really excited!”

The amulet is sculpted in the shape of a dung beetle, an insect regarded throughout ancient cultures as an all-powerful creator god for embodying both decay and regeneration, as it incubates its eggs in the waste of other animals. The amulet’s flat face features two figures: one with an elongated head, evocative of the Egyptian pharaoh’s crown, who appears to bestow power on the other slightly bowed figure.

Based on the scene, Amir Golani, a senior research archaeologist at the IAA, has dated the amulet to the late Bronze Age (1,500–1,000 B.C.E.), “when the local Canaanite rulers lived (and sometimes rebelled) under Egyptian political and cultural hegemony.” Golani reckons this seal of power either fell from the hands of an important official passing through, or was buried on purpose. “It’s difficult to determine the exact original context,” he said.

“It may have been placed on a necklace or a ring [and] is made of faience, a silicate material coated with a bluish-green glaze,” Golani added, noting these Egyptian relics abound across Israel—though not every scarab was actually made in Egypt. The IAA said the caliber of workmanship on this example was “not typical for Egypt and may represent a product of local craftsmen” emulating the popular Egyptian aesthetic, according to Times of Israel.

“The find of the scarab, in the framework of a field tour with pupils participating in the tour-guide course, is symbolic in that the pupils were gaining archaeological knowledge and at the same time contributing to our archaeological heritage,” IAA director Eli Escusido remarked. “This cooperation is truly moving, as we are working toward connecting communities with their cultural heritage.”