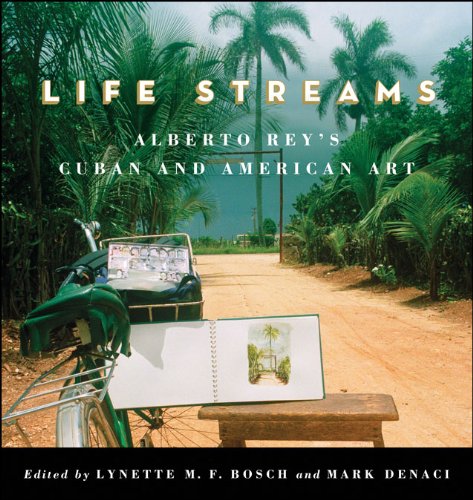 Alberto Rey’s series of books on native fish began with small studies of fish in the places where they were caught. The series continues with large-scale paintings, videos, water data, maps, and information on the history of the stream and the settlements that have settled nearby. Born in Agramont, Cuba, Rey grew up in Barnsboro, Pennsylvania, where his family settled after brief stays in Mexico City and Miami.

Today Alberto Rey is a professor of painting at the State University of New York at Fredonia. His exhibition Life Streams: Alberto Rey, Cuban-American Artist was organized by the Burchfield Penny Center for the Arts with the generous support of Richard Blanco and Sparhawk Oceanfront Resort.

As a Cuban American artist living in western New York, Rey’s current work highlights his involvement with his community and his local landscape, especially his trout streams and the environment. Traveling from his home in the village of Fredonia in upstate New York to the Caribbean, Latin America, Europe, and nearly every state in the United States, Alberto Rey gained insight into people, places, flora, and fauna.

His book Life Streams provides biographical information about Rei and a contextual study of his work. The contributors have written about Alberto Rey’s art and work from perspectives based on cultural studies, identity studies, literary studies, and philosophical studies.

Ray’s work opens up new perspectives on these topics as he combines art with activism at the local, regional, national, and international levels.

In 1967, his family moved to Barnsboro, Pennsylvania (inducted into the North Cumbria Community Hall of Fame in 2019).

Alberto Rey lived in this small coal-mining town until 1982. Then, he completed his BA at the Indiana University of Pennsylvania after attending the Art Institute of Pittsburgh.

In 1987 Alberto Rey received his M.F.A. in drawing and painting and began traveling in Spain, Italy, Morocco, and Mexico. The following year, he enrolled in courses at Harvard University in contemporary art and environmental studies.

The same year, he had his first solo exhibition in New York at the Museum of Contemporary Latin American Art (MoCHA) and was also included in the permanent collection of the El Barrio Museum in New York.

In 1992, Rey’s paintings were selected into the permanent collections of the Albright-Knox Museum, Brooklyn Museum of Art, and Bronx Museum of Art.

His works of art since 1986 have been influenced by his Cuban roots and his attempt to find a sense of identity in a complex contemporary environment.

After 1992, Alberto Rey`s drawings and paintings included realistic imagery as an attempt to establish a clear connection between his past concerns and art history, regionalism and its biocultural concerns.

In 2000, his reflections on modern society began to include environmental issues, views on modern art theory and history of art, biology and the disconnection between society and nature.

3D technology at the service of art

Helen - January 28, 2022 0
The artist manifested the meaningful deaths and lives of non-human through a new project titled “Death of Any Sort”