Home News An African Photography Biennale Makes a Case for Mali as a Creative... 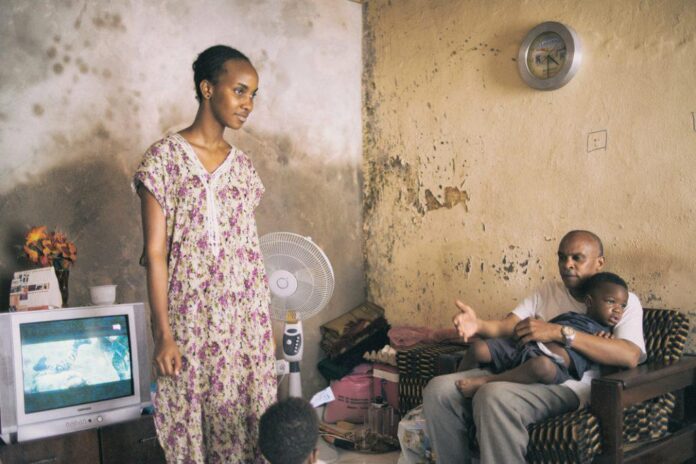 Pioneering photographers such as Seydou Keita, Abdhourahmane Sakaly, and (of course) Malick Sidibe loom large here. And at such moments, even an untrained eye can understand how Bamako is an image-maker’s paradise, and a seemingly perfect setting for a photography biennale. The city’s endlessly compelling, starkly geometric architecture—angular and curved, Sahelian, colonial, and contemporary—is magnificently illuminated by the light.

In early December 2022, dozens of artists from across the world convened for the 13th edition of the Bamako Encounters, which runs until early February 2023. It is titled “On Multiplicity, Difference, Becoming, and Heritage,” a theme that invites the audience to consider moving past understandings of the world that focus on singularity and essentialism, creating room for movement, change, and malleability. Mali is a country with diverse geologies and geographies, inevitably yielding varying ways of living and cultures. This biennale thus explores a universally applicable theme in a place where liminal spaces are ever present.

Spread across seven key sites, including the National Museum of Mali and a disused train station that formerly connected Bamako to Dakar, a standout feature from this edition of the biennale is its substantial inclusion of artists from across the African Diaspora. 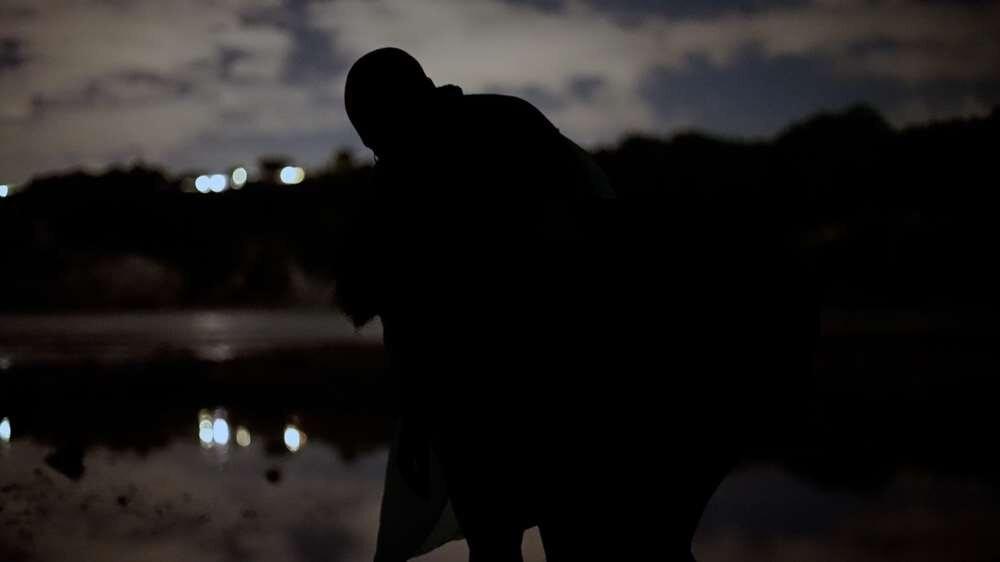 One of the noteworthy works from the biennale, Leave the Edges (2020), which won the biennale’s Grand Prix/Seydou Keita award, came from artist-filmmaker Baff Akoto, who was raised between Accra and London. The work explores African and Diasporic spiritualities, and how they have mutated and transformed across time and in different spaces, as a metaphor for a wider conversation around cultural exchange. 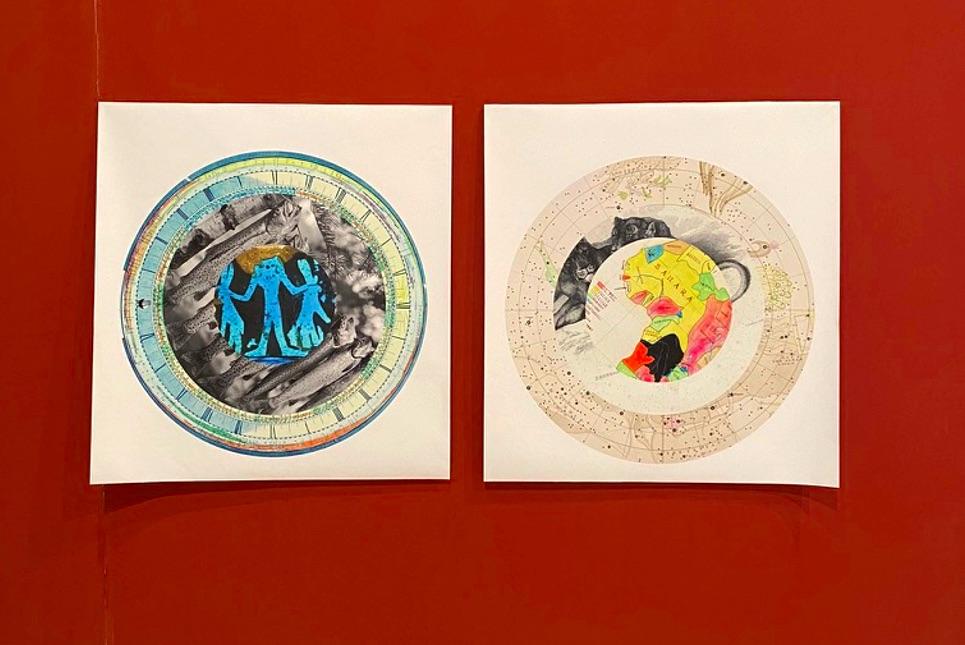 Installation view of works by Anna Binta Diallo, both 2022. Photo by Photp by Tobi Onabolu.

Meanwhile at the National Museum, Anna Binta Diallo’s futuristic looking work explores the historical roots of folklore and storytelling. Employing a variety of maps, prints, and images superimposed onto outlines of human forms, Diallo invites us to consider what it means for humanity to exist in symbiosis with the natural environment. Concurrently, she explores concerns such as migration, identity, and memory. 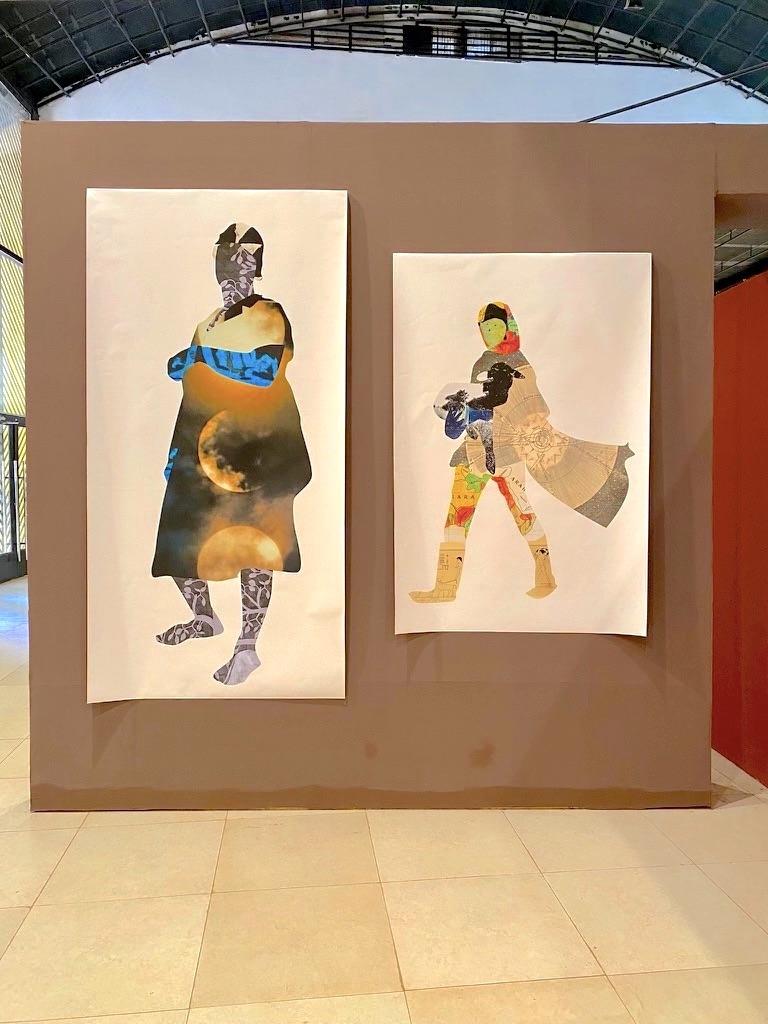 Installation view of works by Anna Binta Diallo, both 2022. Photp by Tobi Onabolu.

Sofia Yala works in the same vein, but on a more personal level within the setting of her own family, questioning the notion of the body as an archive. Yala’s work involves screenprinting her grandfather’s archives—whether private notes, I.D. documents, or work contracts—onto photographs taken by Yala in domestic spaces. Through the process, she is able to uncover deeper layers of identity—a poignant exercise in the context of reconnecting with the artist’s Angolan heritage. 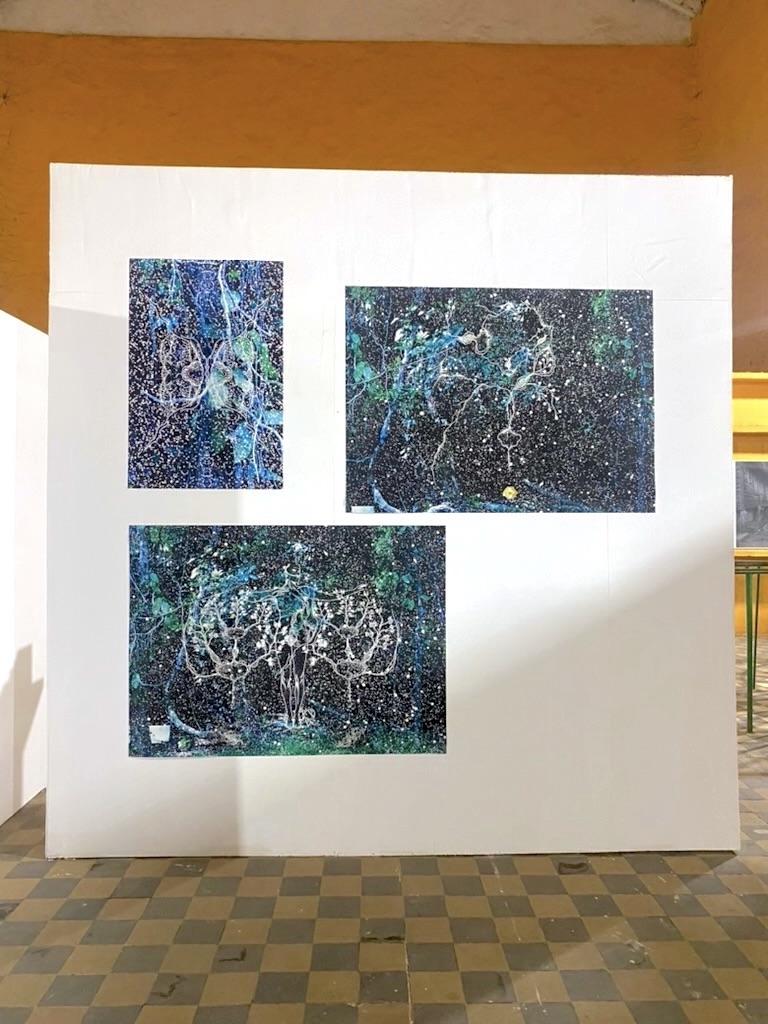 Installation view of works by Marie-Claire Messouma, all 2022. Photo by Tobi Onabolu.

Over at the former train station, sub-themes of magic, the ethereal, and eternity emanate through more conceptual and abstract works. Marie-Claire Messouma’s mystical, melismatic photography aims to spark a conversation about humanity and the cosmos, mixing textile sculptures, ceramics, and other materials, and evoking the feminine.

Similarly, in Fairouz El Tom’s work, the artist questions where the “I” ends and the “you” begins within the discourse of human ontology, prompting vital discussions around the interconnectedness of humanity—or, perhaps, the lack thereof, in this age of uncertainty. 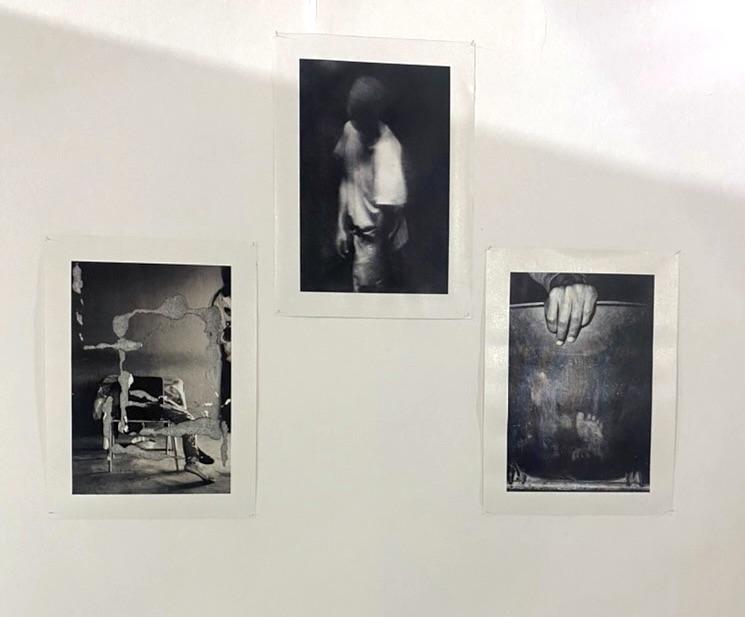 Installation view of works by Thembinkosi Hlatshwayo, all 2019. Photo by Tobi Onabolu.

In Thembinkosi Hlatshwayo’s haunting works, we are invited to reflect on the legacies of human violence and the enduring trauma that comes from it. Drawing on his own past and personal experiences, Hlatshwayo has converted the tavern where he grew up—a site of intense trauma—into his studio, demonstrating a tangibly curative element within his practice.

Who Is It For?

With a high-profile curatorial team attached to the biennale under the artistic direction of superstar curator Dr. Bonaventure Soh Bejeng Ndikung, Bamako Encounters is a triumph for the artists, and undoubtedly an impressive notch on any exhibition C.V. Yet the hyper-conceptual nature of “On Multiplicity, Difference, Becoming, and Heritage,” married with sub-par scenography that often attempts to emulate the white cube model, also creates a disconnection between organizers and audiences, prompting questions, the most pressing of which is: “who is this really for?”

The well-curated, robust program of artist talks and conversations was predominantly attended by the artists themselves, alongside other industry practitioners, once again creating the all-too-familiar echo chambers that the art world is known for. The same problem is felt with the text-heavy, exclusive language of art that accompanies this exhibition, often using insular vocabulary that very few people outside of the industry even understand.

In recent times, the scrutiny of these echo chambers, and the industry at large, have become well popularized by the likes of the Instagram-based account @freeze_magazine. Such critiques often touch on how the art world perpetuates harmful capitalist tendencies, whose victims include both humans and the environment; the flaws and hypocrisy of institutional spaces; and general elitism. And at points, the 13th edition of Bamako Encounters might be guilty of all three offenses, even if to only a fraction of the degree of the Venice Biennale or other biennials in the Global North, or the market at large. 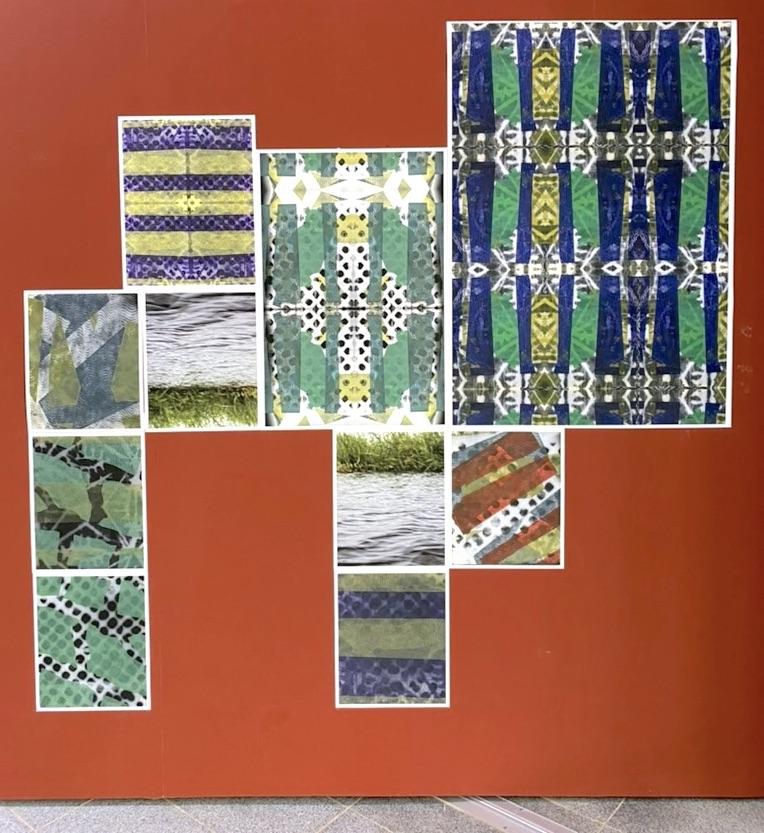 Installation view of works by Adama Delphine Fawund, all 2020. Photo by Tobi Onabolu.

“If the art only exists within institutional spaces it makes you wonder who is it really for and how is it functioning?” exhibiting artist Adama Delphine Fawundu told Artnet News, reflecting on these challenges. “I think most artists are making work that deals with subject matter that actually interrogates the institution. Therefore, what’s important about this biennale is the way that it’s documented, through the books and the text. Fifty years from now, what will people be saying about today? And if the work is not being documented at least for the future, then the biennale has to be interacting with people. How do you take it outside of the museum or the gallery space, and actually engage with real people that we see around? Because this is what we’re actually concerned about.”

And although this edition of Bamako Encounters has a central theme that relates so directly to contemporary realities in Mali, access to these conversations is largely limited to industry practitioners and socio-economic elites, many of whom were flown in specifically for the opening weekend (inevitably producing excessive quantities of carbon emissions just for the biennale to take place). In African contexts, the debate around the most effective modes of presentation and sharing critical artistic work with new audiences continues to bubble.

Nevertheless, perhaps the biennale’s biggest strength was that it became this meeting point for important, unfiltered conversations between artists and practitioners who may never have met otherwise. Indeed, amidst an onslaught of almost-farcical organizational errors, including missing baggage and overbooked hotels, the artists rallied together, evoking the power of the collective through their inter-generational and cross-cultural collaborations and exchanges. With the sheer number of artists present for this event greatly outnumbering overbearing know-it-all curators, hard-to-please institutional overlords, and opportunistic dealers, Bamako provided the platform for real connections to emerge between its exhibiting artists.

And so, despite underlying political uncertainty in Mali, fears of a global recession, and the overarching problems of the global art system, the 13th edition of Bamako Encounters emerges as a success, albeit with a plethora of concerns left to consider.

Framed by a Painting of the Hudson, the River Is the Art World’s Latest Watering Hole in Downtown New York

Artist Ani Liu Has Some Radical Suggestions for What Pregnancy Could Look Like. It Begins With Artificial Wombs