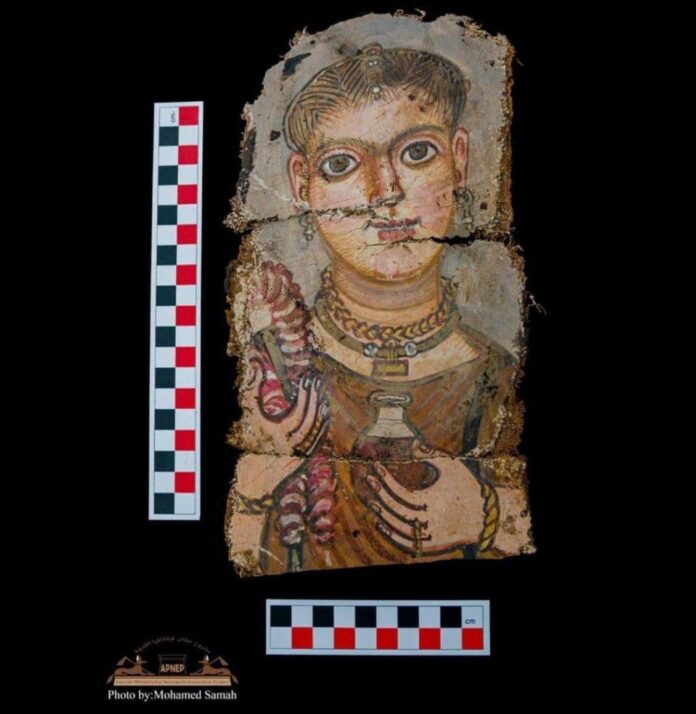 Egyptian archaeologists completing their 10th season of excavations at Gerza, 75 miles southwest of modern day Cairo, have announced the excavation of two full mummy portraits and further fragmentary portraits—the first unique examples of such paintings to meet daylight in more than 115 years. The team also turned up mummies, papyri, pottery, and coffins all dating back to Gerza’s founding as Philadelphia during the Ptolemaic period (305–30 B.C.E.) through the Roman era (30 B.C.E.—390 C.E.).

A release from the Egyptian government explains that King Ptolemy II (309–246 B.C.E.) established Philadelphia as a bucolic central village as part of his agricultural reclamation project to secure food resources for his greater empire. Researchers have been digging at the multicultural site, once inhabited by Greeks and Egyptians alike, since 2016.

According to Adel Okasha, head of Egypt’s Ministry of Tourism and Antiquities, the mission’s latest season explored a semi-subterranean funerary house “with a floor made of colored lime mortar and decorated with interchangeable tiles.” The building provides access to its own narrow street, and there’s a structure outside its southern facade where archaeologists found the remains of four columns. Inside, the funerary building spans six large-scale mud-brick tombs with “mass graves in the catacomb style.”

There, archaeologists found papyri inscribed with Demotic (Egyptian cursive) and Greek script that recounts the social, economic, and religious conditions of regional inhabitants.

Basem Gehad, the head of Ancient Philadelphia Excavation project who led the latest dig, noted that his team also uncovered “a number of coffins of different styles, some of them in the human form and others in the Greek form with a gabled roof.” Mummies within showed how much money mattered in ancient Gerza—some were embalmed with great care, others were left for dead in “burials of a simple nature,” said Mostafa Waziri, secretary general of the Supreme Council of Antiquities.

A terracotta statue of Isis-Aphrodite, the fertility and love goddess, recovered from the wooden coffin of a young Greek girl stood apart from the cache. Not only is such a relic rare, it also “reflects the influence of Greeks on Egyptian art as a result of [the] new community living there,” Gehad wrote in an email to Artnet News.

However, the new mummy portraits are undeniably the dig’s most groundbreaking discovery—the first to appear since English archaeologist Flinders Petrie found 146 such portraits at a Roman cemetery in 1911.

Also named Fayoum portraits for their plentiful numbers in the Fayoum Oasis, these full-color portraits of the wealthy deceased rank among the most detailed ancient paintings known today. Gehad told Artnet News that most of the previously discovered portraits ended up with Viennese art collector, dealer, and carpet entrepreneur Theodor Graf, who counted museums across Europe and America and individuals like Sigmund Freud as his clients.

This time, the Fayoum portraits will remain in Egypt for further study. “No one really knows the context of these portraits,” Gehad added. “Now, we can know certainly where they came from, and find more.”