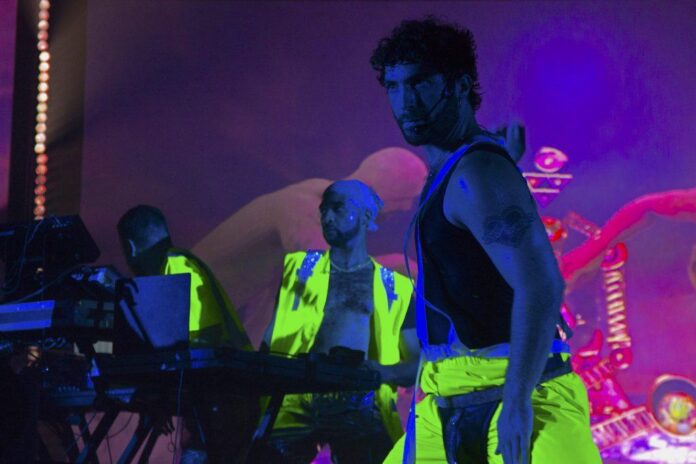 Over four nights and three days, upwards of 10,000 visitors flowed through Bentonville, Arkansas to attend the inaugural edition of FORMAT. Event producers describe the flashy new affair as a blend of “art, music, and technology.” If this year’s iteration is a reliable indication, what that means is a heady cocktail of cyborg art, NFT interventions, and other high-production performances.

Home to the Crystal Bridges Museum of American Art, Bentonville has, over the last decade, gained momentum as a site of interest on the art world’s radar. (The Momentary, the Museum’s contemporary art-focused satellite that opened in 2020, is currently host to a riveting set of works by the likes of Kara Walker, Xaviera Simmons, and Lucy Raven.) That this town of 50,000 is now also home to a recurring, internationally oriented festival indicates a sustained interest on the city’s part to continue attracting economic growth via cultural tourism.

Getting to the festival entailed a short rideshare north of downtown Bentonville, followed by a walk along a paved road which can be significantly shortened by any of the independently run bike carriages or golf carts zipping back and forth. (Shuttle buses and bicycles were, incidentally, the only other modes of transportation available to visitors; parking was not an option.)

At the end of the trail, past the festival gates, FORMAT’s venues sprawled out across a 250-acre expanse of the Runway Group’s backcountry airstrip, luring in visitors with flashy lights and endless waves of musical programming.

The event was anchored by two traditional concert stages, where the likes of Nile Rogers, Beach House, and Herbie Hancock held court. Peppered around and beyond these performance spaces were smaller, selfie-friendly installations—not unlike those found at comparable festivals like Coachella—that formed an immersive theme park of “Big Fun Art.” Noteworthy among these were ASSUME VIVID ASTRO FOCUS’s Smokey, which served as a stage for English rapper and DJ Shygirl’s crowd-pleasing concert, and a version of James Tapscott’s Arc ZERO: Eclipse sculpture, which doubled as a misting station for festival-goers seeking relief from the end-of-summer heat. 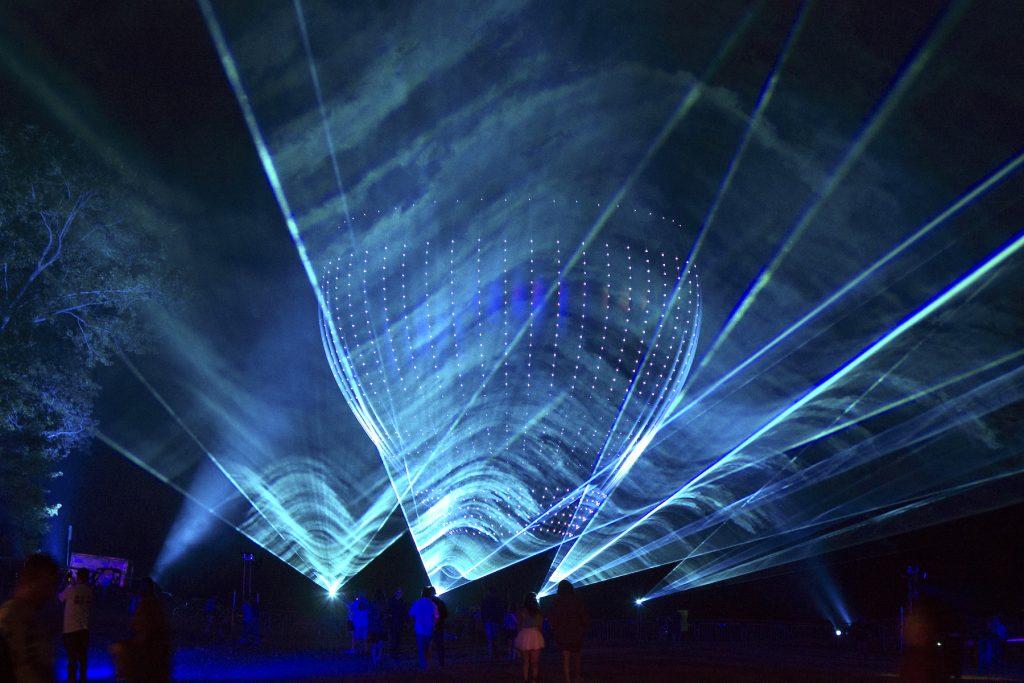 According to Mafalda Millies, one of the festival’s curators, the idea behind FORMAT started to take shape as early as 2018. In collaboration with co-curators Roya Sachs, Elizabeth Edelman, and Charles Attal (co-founder of the concert promoter C3 Presents), the team’s search for a venue gained traction following a conversation with Olivia Walton, the Crystal Bridges Museum of American Art’s director, along with her husband, Tom (grandson of Walmart founder Sam Walton), and brother-in-law, Steuart.

“It was Olivia Walton who began the conversation,” Millies said in a phone interview, later remarking on Walton’s knowledge of both the visual arts and of the town (“which they’re hoping to grow, culturally speaking”) as being instrumental to realizing the event.

The Bizarre Bazaar, one of the curatorial initiatives designed to include local artists and producers, offered a mix of services like food trucks and specialty merchant tables in a dedicated area. But while local participation on the vendors’ side opened up some opportunities, the price for visitors was, for many, still out of reach. Day passes for general admission started at $125, a number that soared to $2,500 for a three-day “Platinum” VIP pass. 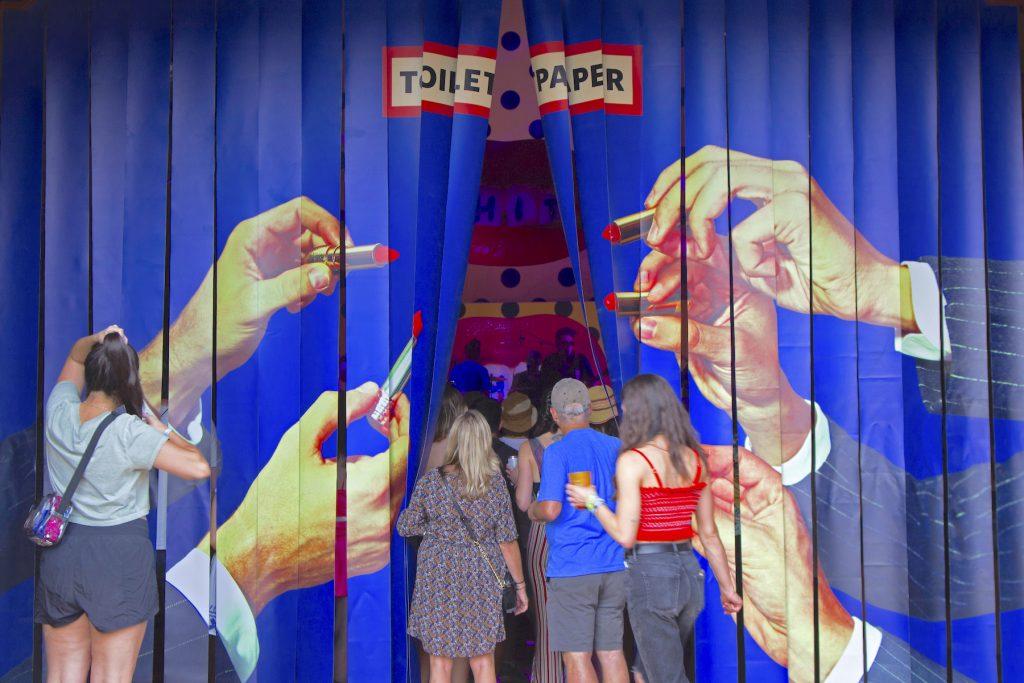 Entrance to TOILETPAPER MAGAZINE’s Drag Me to the Disco (2022). Image by Rain Embuscado.

So, how was the art? Each of the participating visual artists engaged the space with their signature approaches. Maurizio Cattelan’s TOILETPAPER MAGAZINE, for example, opted to embody the “artist-as-set-designer” role, transforming a barn into a platformed dance hall for an installation titled Drag Me to the Disco. Justin Lowe and Jonah Freeman, meanwhile, built a hybrid speakeasy-cum-performance-venue titled Next Door, which they constructed using repurposed doors from porta-johns and a variety of counter-cultural ephemera.

Artist Nick Cave (currently the subject of a major retrospective at the Museum of Contemporary Arts Chicago), participated in the festivities, contributing a selection of his Soundsuits (1992–present) which dancers activated during musical acts by artists like the Flaming Lips and Seun Kuti & Egypt 80. Nancy Baker Cahill, who presented a number of NFT artworks at the Solana House venue (sponsored by the eponymous blockchain), captivated passersby with amorphous digital renderings displayed on floor-to-ceiling digital screens.

Jacolby Satterwhite chose the occasion to debut PAT, a new performance piece developed in partnership with Performa. He remarked that the event’s production quality was of the highest quality. “I was attracted to the lineup,” Satterwhite admitted to Artnet News, adding that FORMAT also provided a good testing ground for the new “tone” of his work. 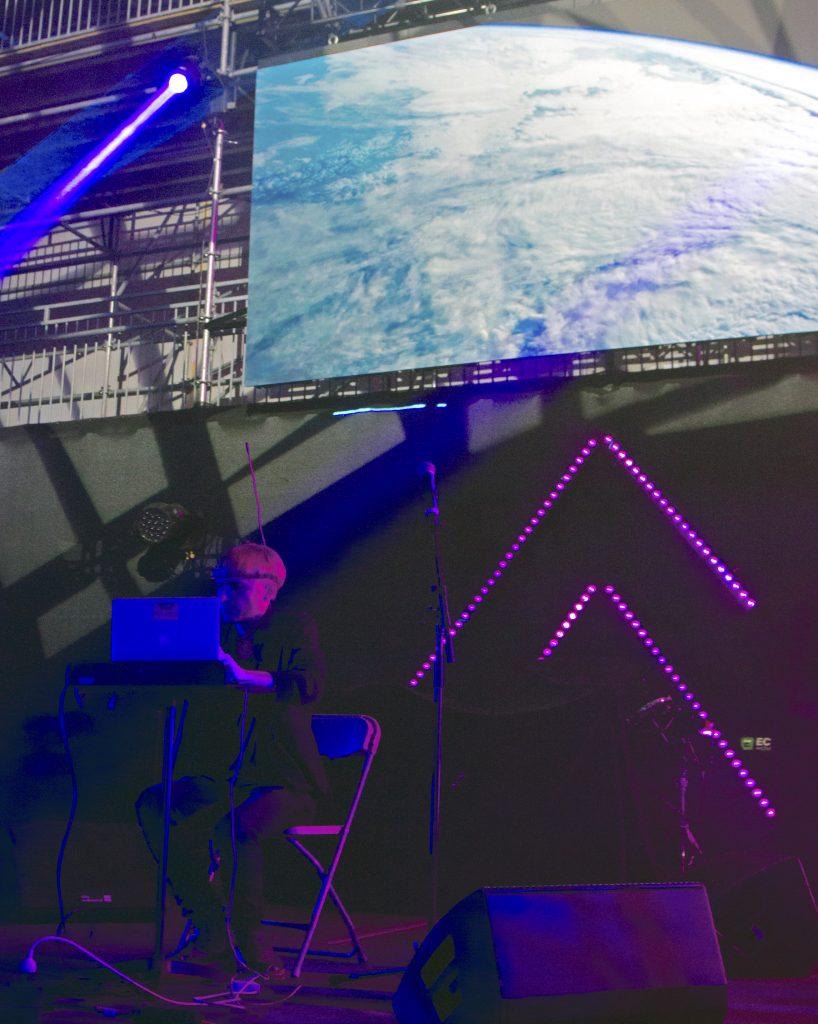 Artist Neil Harbisson answered FORMAT’s call to present his “space concert” for the first time to a U.S. audience. Largely known for his advocacy of the cyborg art movement—he has an antenna implanted in his skull—Harbisson’s contribution to FORMAT involved connecting to the NASA International Space Station, and translating the signals he received into a musical composition. This Bentonville performance of a work which Harbisson had previously only delivered in European cities stood as an example of what was possible in a technologically decentralized art world.

“The composition is created by the cosmos,” Harbisson told Artnet News. “There is no separation between artwork and artist. Art is everywhere.”