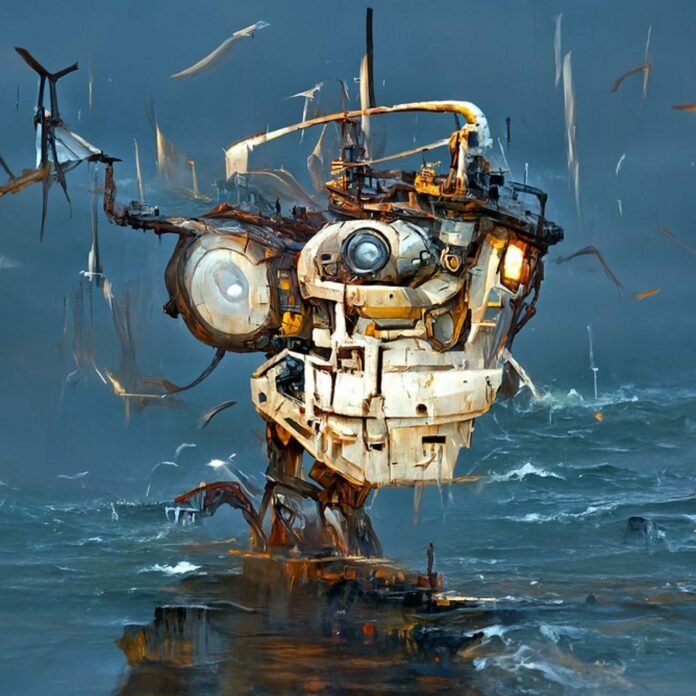 Documentary Exposes Shocking Gender Price Gap in Art World – will air a new radio documentary by author Helen Gorrill investigating the gender pay gap in art. Among the findings is a 10:1 disparity in prices between pieces sold by men and women, and the fact that painting’s signed with a male name sell for more while paintings signed with a female name sell for less. Called the radio exposé will air on August 11. ()

New Project Combines the Bored Apes With AI, Strikes gold – With the slogan “Let Monke Make Image for You,” a Hartford, Connecticut-based team of AI artists fed all 10,000 Bored Ape Yacht Club NFTs into an AI art program, and created 10,000 “Artsy Monke” NFTs—chaotic, Archimboldo-esque images of “intricate Viking ship scenes, moody neon city landscapes, the intense stormy oceans” that come together into the faces of the disaffected simians. Dan Hovey, the project’s blockchain specialist, says that the Artsy Monkey team “felt there was a fine art element missing from the standard NFT collections.” On OpenSea, the Artsy Monke NFTs sold out immediately (albeit at a pretty low price point: you can get one for about $1.40, as opposed to $100,000 for the cheapest Bored Ape), and the company is plotting an Artsy Monkeland metaverse. What a world. (CoinTelegraph)

Mary Obering Dies at 85 – The beloved abstract painter Mary Obering has died at 85 from natural causes. After working for years in relative obscurity Obering’s large-scale geometric abstractions have garnered a following in recent years, after she took on new representation with now-defunct Kayne Griffin Corcoran gallery in Los Angeles in 2018 and Bortolami in New York the following year. (ARTnews)

Monika Sprüth Wins Art Cologne Prize – Art Cologne has awarded dealer Monika Sprüth, who founded her gallery in the South of Cologne in 1983, with its €10,000 annual prize for excellence. It will be awarded on November 17 in a ceremony at Cologne’s historic town hall. (FAZ)

Phillips Is Organizing a Pop Up Exhibition in Seoul – Phillips is collaborating with the Artist Room on a pop-up exhibition at Lee Eugean Gallery in Seoul’s Gangnam district August 21 through September 6. The house’s first initiative in Seoul, “New Romantics” will preview a sale of works by emerging mid career artists including Hernan Bas and Ania Hobson who are reviving the spirit of Romanticism. The works will be sold in Hong Kong from September 19. ()

David Kordansky Is Also Staging a Pop Up Exhibition in Seoul – David Kordansky will hold a pop-up exhibition in Seoul taking place August 18 through September 5 to coincide with Frieze Seoul and the Kiaf fairs. It will be at 157, Itaewon-ro 55-gil in the Yongsan-gu neighborhood and aims to introduce Korean and Asian audiences to the gallery’s program with artists from John Armleder to Shara Hughes. (Press release)

Ballroom Marfa Names Executive Director – The Marfa, Texas-based art center has appointed curator Daisy Nam as its new executive director, a role which she will take on after serving as a curator there since 2020. While curator, Nam organized the solo show of artist Donna Huanca titled ESPEJO QUEMADA and along with music curator Sarah Melendez launched the artist residency program “Ballroom Session–The Farther Place” during the pandemic. Nam was the assistant director at the Carpenter Center for Visual Arts at Harvard from 2015-2019 and co-edited the publication Best! Letters from Asian Americans in the Arts (2021) with Paper Monument. (Press release)

Olafur Eliasson Creates Coloful Pavilion for Cali Winery – The Icelandic-Danish artist worked with architect Sebastian Behmann on a coloful kaleidoscopic pavilion that will be used to host wine tastings at the Donum Estate, a California winery in Sonoma owned by collectors Mei and Allan Warburg. See it here. (TAN)