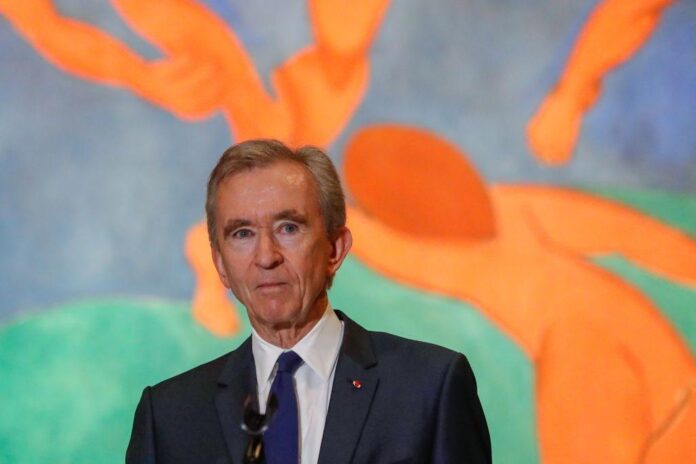 Pakui Hardware Will Represent Lithuania at the Venice Biennale – The early Venice announcements keep rolling in! Pakui Hardware, comprised of Neringa Cerniauskaite and Ugnius Gelguda, plans to present an immersive installation including works by the Modernist painter Marija Teresė Rožanskaitė. Estonia and France have also already named their artists for the 2024 edition. (Press release)

Bernard Arnault Is Now the Richest Person in the World – Bernard Arnault, owner of the luxury conglomerate LVMH and one of the world’s top art collectors, saw his wealth spike $2.2 billion this week, which means he squeaked past Elon Musk to become the richest person in the world. He and his family have a net worth of $186.9 billion. (Forbes, )

Netherlands Returns 200 Artifacts to Mexico – More than 220 pre-Hispanic artifacts were repatriated to Mexico as a result of “active cooperation” between the country and the Netherlands. Mexican president Andrés Manuel López Obrador launched a social media campaign calling for the return of cultural objects, and so far more than 9,000 have been returned. (The Art Newspaper)

Libbie Mugrabi Pleads Not Guilty of Attacking Housekeeper – The art collector appeared in Southampton Town Justice Court to plead not guilty to charges that she broke her former housekeeper’s cell phone and threatened her with a knife and mop handle last summer. Libbie is the ex-wife of billionaire collector David Mugrabi. (Page Six)

American Women’s History Museum Gets $1 Million Gift – The consulting firm Deloitte has established itself as a founding donor of the forthcoming Washington, D.C., museum with a $1 million gift. Legislation to create the museum, which plans to honor and recognize women’s historic accomplishments, passed in 2020. (Press release)

L.A.’s Natural History Museum Will Reopen in 2024 – The renovation and expansion project, dubbed the NHM Commons, will open to the public in 2024, one year later than originally planned. The $75 million project adds 60,000 square feet to the institution and includes a 400-seat theater, cafe, gift shop, and events plaza. (Los Angeles Times)

Park West Opens New York Outpost – Park West Gallery, the 50-year-old company best known selling art on cruise ships, is opening a brick-and-mortar space in New York’s SoHo. It is its third gallery in the past two years, following venues in Las Vegas and Honolulu. The gallery will present historic work by the likes of Picasso and Renoir alongside pieces by living artists, such as Hunt Slonem and Mark Kostabi. (Press release)

The Prada Foundation ‘Recycles’ Beauty – A new show at the Milan institution (on view until February 25) provides a unique take on classical art. The installation, designed by architect Rem Koolhaas, sees ancient busts installed atop cubicle desks. The aim is to demonstrate that our understanding of art and beauty is in no way no as fixed as art historians sometimes imagine it to be. ()