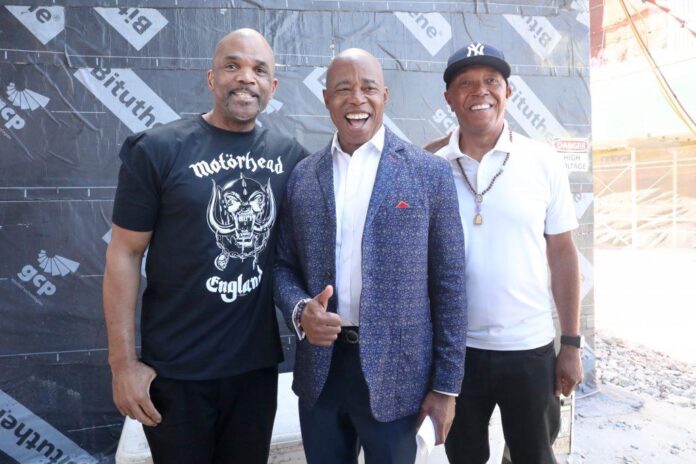 Antony Gormley’s Plan for ‘Phallic’ Sculpture Angers University Students – University students at the Imperial College of London say that plans to install a “phallic” sculpture by Antony Gormley on campus is “exclusionary” due to the gender imbalance of students and staff at school. Titled the 20-foot-tall steel sculpture is apparently supposed to resemble a squatting human figure, but one protruding steel block—plus the work’s title, which some say references an erection—has caused consternation among the students. (The Art Newspaper)

Nancy Pelosi Visits National Human Rights Museum Amid Tense Trip to Taiwan – During her controversial trip to Taiwan, U.S. House of Representatives speaker Nancy Pelosi visited the National Human Rights Museum that is within the Jing-Mei White Terror Memorial Park in New Taipei City. In a tweet, Pelosi wrote: “Together with former political prisoners our delegation visited the Nat’l Human Rights Museum: a tribute to heroes who suffered and fought for Taiwan’s Democracy. Then we heard from civil society leaders on human rights. We came to listen & learn; we left inspired by their courage.” (TAN)

New York Announces $5.5 Million for Universal Hip Hop Museum – New York City Mayor Eric Adams and culture commissioner Laurie Cumbo have announced that the city will contribute $5.5 million to new capital funding for a forthcoming Universal Hip Hop Museum, which is set to open in a 52,000-square-foot building at Mill Pond Park in the Bronx. Adams’s administration committed $2 million of the total amount, with the remaining $3.5 million coming from local elected officials. “Whether you are in Co-op City or Canarsie, New Yorkers deserve the opportunity to learn about some of the unique cultures in their backyard,” Adams said. “Hip Hop tells the story of this city and the Bronx so vividly. It tells life amid poverty and crime, of turning pain into purpose, of making it. (Press release)

Storm King Art Center Announces $45 Million Renovation – The Storm King Art Center in upstate New York shared details of its $45 million redesign that will take place this fall. An international cohort of landscape and architecture firms are involved in the project, which will include the creation of a new conservation building and the planting of around 600 trees across the 500-acre property. The goal is to improve visitor experience as well as environmental biodiversity. (Press release)

LACMA Art and Film Gala Names 2022 Honorees – Sculptor Helen Pashgian and filmmaker Park Chan-wook will be feted at the 2022 Los Angeles County Museum of Art Art and Film Gala. Pashgian is a Light and Space artist whose ethereal reflective sculptures she describes as “‘presences’ in space,”  and her first large-scale installation was exhibited at LACMA in 2014, and is now part of the museum’s permanent collection. South Korean-born director Park Chan-wook won the 2022 directing prize at the Cannes Film Festival for his romantic mystery Decision to Leave. The event, which is a mainstay for the West Coast cultural elite, will be co-chaired by Eva Chow and Leonardo DiCaprio on November 5. (Los Angeles Times)

Pollock-Krasner Foundation Awards Millions in Grants – Almost $2.7 million worth of grant money has been awarded to 106 artists and nonprofit art organizations from 16 countries and 16 U.S. states. The grants are intended to support artists and organizations in creating new work, mounting exhibitions, attending residences, purchasing materials and supplies, and to offset living expenses. The 2022 Lee Krasner Award was given to Brazilian artist Josely Carvalho, who founded the Silkscreen Project at St. Mark’s Church in New York in the 1970s and participated in the Artists’ Call Against U.S. Intervention in Central America in 1984, and the 2022 exhibition  “Art for the Future: Artists Call and Central American Solidarities,” which revisited the event. (Artforum)

Amon Carter Announces New Director of Collections & Exhibitions – Andrew Eschelbacher will join the Fort Worth museum to manage the institution’s renowned American art collection, as well as curatorial, conservation, and exhibition initiatives. Prior to joining the Amon Carter Museum, Eschelbacher served as the director of curatorial affairs at the American Federation of Arts. He will begin the new role in September. (Press release)

Raymond Pettibon’s Cover for Reboot – The American rock ‘n roll magazine is getting relaunched after 33 years, and who better than rock star artist Raymond Pettibon to grace its first cover? (, Press release)