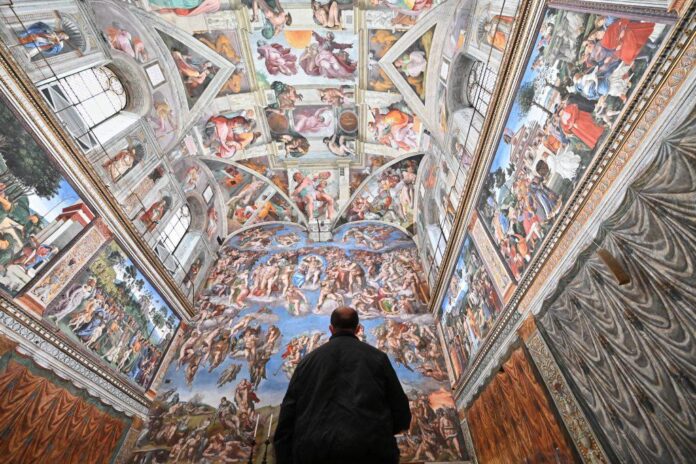 Jewish Collective Responds to Rumors of Antisemitism at Documenta – Casa do Povo, a Brazilian Jewish art organization, said it was never formally invited to take part in Documenta, contradicting an article published in that suggested the collective was invited and then uninvited because of the antisemitism row. The group said they had initial conversations about participating, but they went nowhere because of the pandemic. ()

Indigenous Groups Call on Vatican to Return Objects – Indigenous groups from Canada said cultural treasures stored in the Vatican’s Anima Mundi Ethnological Museum should be returned ahead of Pope Francis’s trip to the country. “These pieces that belong to us should come home,” said Metis National Council president Cassidy Caron. The Vatican said the artifacts were gifts to Pope Pius XI in celebration of the church’s global reach. Pope Francis is expected to land in Canada on July 24. ()

Russell Crowe Gets a Private Sistine Chapel Tour – Celebrities… they’re just like us, except when they get private tours of the Sistine Chapel and are permitted to take photographs when the rest of the public is prohibited from doing so. “I’m not sure there’s a more special privilege in the world than to hold the key for the Sistine Chapel and to experience its glory in silence,” Crowe posted on Twitter. Fans were quick to ask why the Vatican considers the stars so much closer to heaven—Jason Momoa had a similar reception after his private tour and photo shoot earlier this year. ()

The Armory Show Will Spotlight the Public Monument Debate – Curated by Tobias Ostrander, Tate’s curator of Latin American art, the Armory Show’s Platform section for large-scale art projects will focus on the role of public monuments and the growing demand to dismantle sculptures commemorating problematic histories. The 12 pieces by artists including Iván Argote and Ebony G. Patterson will be installed at the center of the fair. ()

The Met Acquires Works From Howard Hodgkin Collection – The Metropolitan Museum of Art has acquired a selection of works from the late artist’s Indian art holdings after Oxford’s Ashmolean Museum rejected the full collection amid concerns that some of the works could have been illegally trafficked. The Met says it only acquired the 80 works with verifiable provenance, but it will display the full 122-work collection in an exhibition slated for 2024. ()

MFA Boston Gets a Print Windfall – The Museum of Fine Arts, Boston, acquired the collection of more than 2,000 modern and contemporary prints assembled by the late Harvard professor Richard E. Caves. “Though his vocation was economics, Dick’s secret desire was to be a print curator,” said Patrick Murphy, associate curator of prints and drawings. The trove is equally focused on British artists and Minimalism. ()

Germany’s Culture Minister Says Museums Should Lead the Way in Energy Saving – The government organized an energy management workshop on Tuesday for German cultural institutions to help prepare them to address rising energy prices and scarce gas reserves. “The cultural sector should and must make its contribution to saving energy, also with a view to climate change,” said Claudia Roth, Germany’s culture minster. ()

Giant Gorilla Installation Descends on Bristol Zoo – A four-ton interactive gorilla sculpture named Wilder designed by theatrical company Bakehouse Factory has been installed at Bristol Zoo to mark the final weeks before the zoo’s closure on September 3. The 23-foot-tall gorilla is made from sustainable wood donated by Westonbirt Arboretum in Gloucestershire. ()