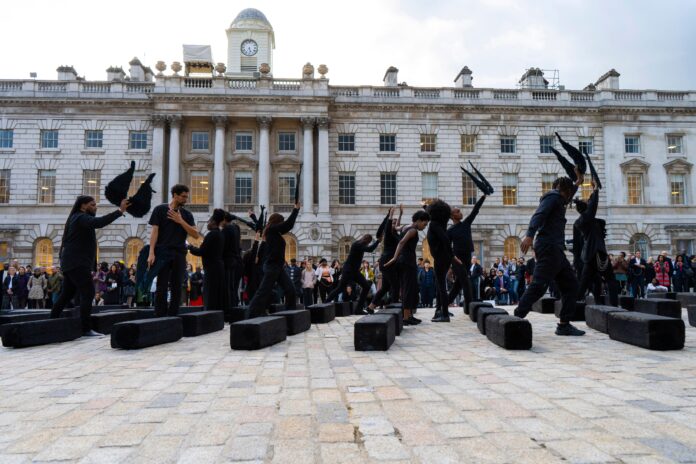 The 1-54 Contemporary African Art Fair is marking its tenth anniversary on a powerfully sombre note with the first-time UK showing of the Portuguese artist Grada Kilomba’s striking 32m-long installation that occupies the main courtyard of Somerset House.

O Barco/The Boat (2021) consists of 140 charred wooden blocks configured in the outline of the hold of a historical European slave ship. Each tomb-like rectangle has been individually charred, and several are inscribed with poems translated into African languages, including Yoruba, Kimbundu and Creole as well as English, Portuguese and Arabic. This grim reminder of European expansion and colonisation is rendered all the more potent given the history of Somerset House as the former home of Britain’s Navy Board.

This week, the work is being animated by two hour-long performances (one last night and one at 1pm today). These live works are designed and directed by the artist, with a multigenerational ensemble of collaborators of African descent using dance, song and poetry to revive these forgotten histories.

Boldly Building the Future Series Launches, a Collaboration Between Initiatives in Art and Culture and Mark Hanna