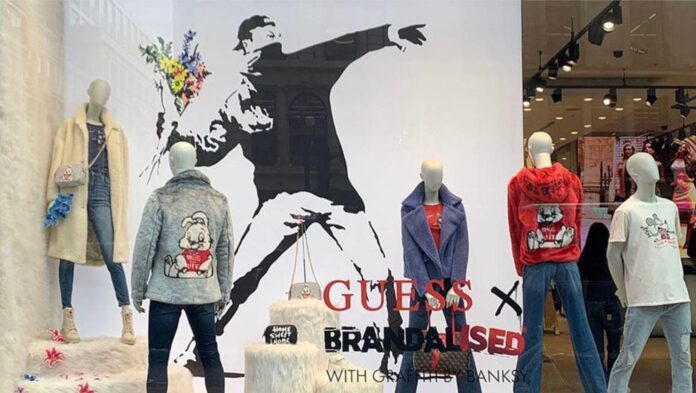 The secretive artist Banksy has called out the American clothing retailer Guess on Instagram, alleging that the brand has used his imagery without permission.

In an incensed Instagram post, the art world prankster invited followers to shoplift from Guess’s brick-and-mortar location on Regent Street in London, writing: “They’ve helped themselves to my artwork without asking, how can it be wrong for you to do the same to them?” Guess has not  yet responded to the allegations, although store staff closed that location to the public, obscured the reproduction of Banksy’s iconic Flower Thrower in its window display and increased security to avoid retributive action from the artist’s 11.5 million followers.

The brand has recently announced a new collection in collaboration with Brandalised, a company that licenses recognizable graffiti designs. Mega-collector and Guess co-founder Paul Marciano even called Banksy’s work a “phenomenal influence on popular culture”. It is not yet clear whether Banksy did or did not know about Brandalised’s licensing deal with Guess, although copyright lawyer Liz Ward told BBC News that Brandalised does appear to have “legitimately sourced the Banksy artwork via a third party”.

Banksy’s intellectual property indignation at Guess comes hot on the heels of his triumph in court in a long-running European Union trademark dispute. On 15 November, the artist won an appeal allowing him to maintain the trademark to one of his most enduring images, a monkey wearing a sandwich board, while also keeping his identity secret.