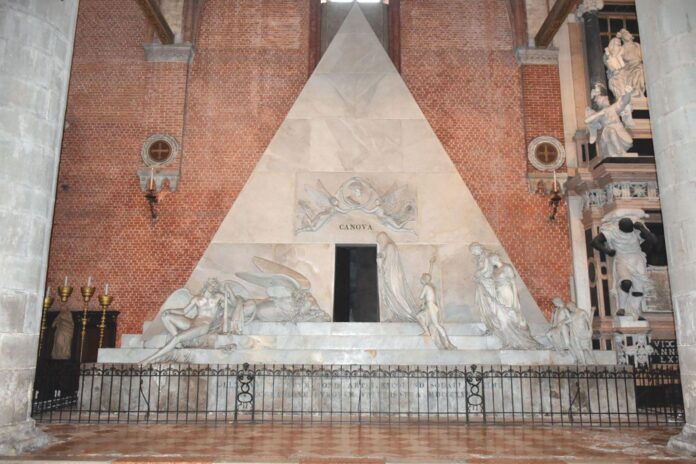 If Venice were an exhibition rather than a city, conservators would close it down as being environmentally unfit to display works of art. It is damp: its water level is chronically too high, which is eating away at the fabric of the city due to periodic flooding events. The winds are loaded with pollutants from the nearby petrochemical works and the whole of the Po Valley, the most industrialised part of Italy. The ever more frequent storms in the Adriatic Sea create aerosol droplets that turn the sulphur trioxide in the air into sulphuric acid, which eats away at marble and bronze. And, increasingly, there is thermal shock, the stresses caused by temperatures that can plunge from 35°C to 16°C in short order. The city is sick and will need constant and increasing care.

This assessment is echoed by Giovanni Giannelli of the Ottorino Nonfarmale conservation studio, when talking about Venice’s Canova Monument in the church of the Frari. The studio has been working on the monument since 2020 under the supervision of heritage authorities, and the project is being presented on 13 October, the bicentenary of the death of Canova. But Giannelli emphasises that this will be a work in progress—probably forever due to the hostile conditions in which the monument exists.

The conservation has been financed by the British charity Venice in Peril, which chose the monument in part due to the esteem in which Canova was held by the British during his lifetime. Not only are there many sculptures by Canova in UK collections, but his role was vital after 1814 as a mediator in the repatriation of works of art looted by Napoleon, which was supported by the British government with a frigate and a grant of £35,000.

On the death of Canova in Venice, the art historian Leopoldo Cicognara launched an appeal for contributions to build a monument in which to enshrine his heart, for which a porphyry vase was donated by the Treasury of St Mark’s (his body lies in Possagno, his birthplace, while his right hand is in the Accademia di Belle Arti in Venice). Money flowed in, especially from grateful rulers in Spain, Italy, Prussia and Russia.

The whole creation is thus a threefold tribute to Canova. Its pyramidal form is based on his design for a monument to Titian, the figures are by his followers, and the material is the pure white Carrara marble that he used for nearly all his works. But Carrara marble is particularly susceptible to damage from the salts in the water rising by capillary action from the soil beneath the stone flags on which the monument rests. It has required 13 applications of compresses with deionised water to draw them out.

The second challenge has been to undo the damage caused by a previous restoration in which an acrylic resin called Paraloid B-72 was applied in too concentrated a form, which prevented the marble from “breathing” and caused it to swell and crumble.

The third problem was the yellow stains on the base caused by the rusting of concealed iron clamps. Part of the base had to be dismantled in order to replace them with stainless steel.

And then there was the mystery as to why some of the statues but not others broke out into a sweat from time to time. The culprit turned out to be two blocked downpipes that should have channelled rainwater from the gutters to conduits opening into the canal; instead, they were pouring water into the brickwork of the church. This was discovered empirically last year when Giannelli noticed that the statues were still sweating during heavy rainstorms, even when the mobile barriers were keeping flood water out of Venice. He says that the lack of a maintenance culture is seriously damaging the Italian heritage.

This is why the protocol that Studio Ottorino Nonfarmale has signed with the parish priest of the Frari for biennial maintenance of the Canova
Monument is an important innovation that Guy Elliott, the chairman of Venice in Peril, welcomes very warmly. “We cannot guarantee ongoing funding, but we will do all we can to assist,” he says.