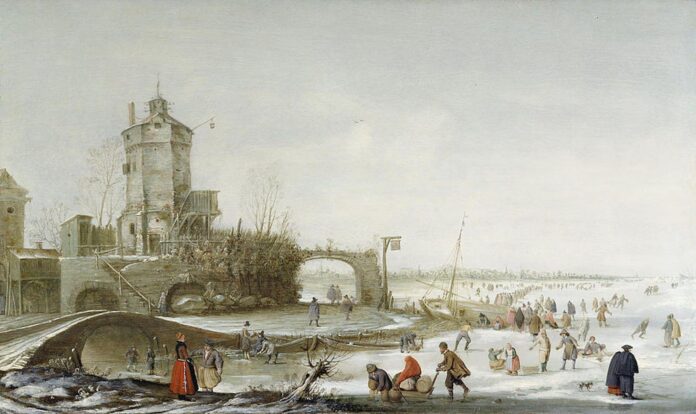 In 1978, 12 paintings were stolen from the home of Robert Stoddard, a trustee of the Worcester Art Museum in Massachussetts, including a work by Auguste Renoir, a J.M.W. Turner watercolour and a scenic 17th-century painting, Winter Landscape with Skater and Other Figures (1630s), by Dutch painter Henrick Avercamp. Only three of the 12 works, valued collectively at around $10m, have been recovered to date, but Schorer’s recent investigation may help add to that tally in the very near future, Boston Magazine reports.

Schorer, a former board president of the Worcester Art Museum, took a special interest in this cold case because several of the stolen works had been promised to the institution prior to Stoddard’s death in 1984. Last year, when Schorer conducted a reverse Google Image search on the missing Avercamp painting, he was surprised to find a high-resolution reproduction of the image printed on a throw pillow through Pixels.com, an on-demand art-merchandise site. Schorer determined that the image was too sharp to have been taken before 1978, traced the photo’s metadata and uncovered a 2012 copyright owned by a dealer he knew in New York.

After making contact with the dealer, Schorer discovered that the painting in question had been sold at a European art fair in 1995, attributed to Hendrick Avercamp’s less illustrious nephew, Barent Avercamp. Eventually, Schorer tracked down the niece of the gallerist who sold the painting at that fair, learning the names of the deceased Dutch couple who had purchased the stolen painting, as well as its price, $200,000—pennies compared to what it would have been worth with Hendrick’s name attached.

Schorer is attempting to make contact with the Dutch buyers’ heirs and has sent multiple letters on behalf of the Worcester Art Museum advocating for an amicable return. If the heirs refuse or do not respond, the case will be handed over to Dutch police.