Home News Confiscated photographs showing preparations for Hitler’s 1938 visit to Italy are made... 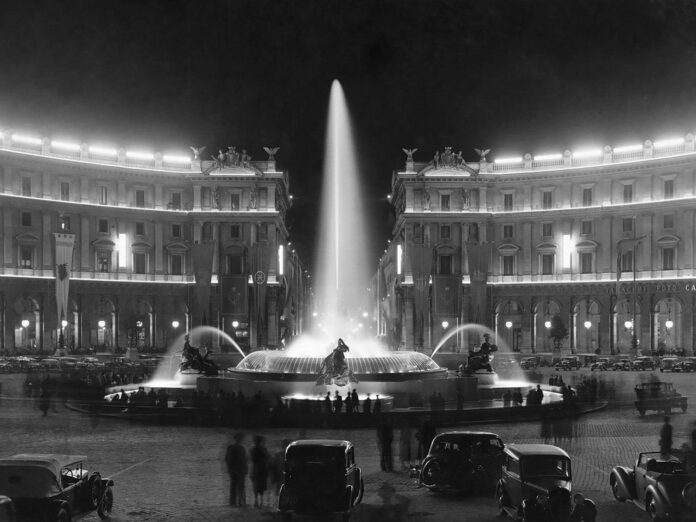 Thirty-eight original black-and-white photos chronicling preparations in Rome for Hitler’s momentous visit to Italy in 1938—which took in key art and archaeology sites—have been returned to Luce’s Historical Archive. Members of Carabinieri TPC, Italy’s art recovery hit squad, confiscated the images from an amateur dealer of archaeological artefacts in May 2020; in July this year, a court in L’Aquila ordered that the images should be returned to the archive, making them freely accessible to academics and the public.

The images were spotted after the L’Aquila-based collector listed them on Ebay, together with 50 other archival documents and Roman and Etruscan archaeological fragments. By studying a serial number printed on the back of the album, Luce archivists and their counterparts in Lazio determined the images had come from the Luce archive. The negatives have still not been located.

Seeing the photos for the first time was “an exceptional moment”, says Chiara Sbarigia, the president of Cinecittà, which is responsible for the Luce archive. “Taken as a whole, the archive is a puzzle providing a better understanding of the inner workings of the fascist regime. Now we have another piece of the puzzle that adds a vital piece of information.”

Conducted at a time when Germany’s annexation of Austria two months earlier had created tensions between Adolf Hitler and Benito Mussolini, the carefully choreographed trip to Rome, Florence and Naples was designed to project the might of the Rome-Berlin axis to domestic and international audiences. On 3 May, Hitler’s train arrived at Rome’s Ostiense station, which had been renovated for the occasion. Supporters flooded streets that were reportedly lined with more than 10,000 tricolour flags bearing fasces. “There are still six hours before the scheduled arrival and it is already impossible to move around Rome,” the Italian newspaper Corriere della Sera reported at the time.

Art and archaeology played a central role during the Italian tour. In Rome, Ranuccio Bianchi Bandinelli, the German-speaking art historian and archaeologist, led the leaders around Capitoline museums, the Ara Pacis, the Galleria Borghese and the Baths of Diocletian. In Florence, he guided them through the collections of the Palazzo Pitti and the Uffizi. In one room in the Uffizi palace, paintings on loan from Germany were displayed alongside German paintings from the Florentine collection. Giorgio Castelfranco, the Jewish director of the Palazzo Pitti museums, was forced to temporarily leave Florence while Hitler was visiting the city.

Recording the Führer’s every step were 274 journalists from Italy, 130 from Germany and 170 from other countries. Created by Mussolini in 1924, the Luce film corporation, which had established itself as a powerful propaganda tool under Italy’s fascist regime, deployed 120 staff including photo-graphers, a special squad for creating colour reels, and operators driving cars mounted with cameras for shooting roving footage. “There is no denying it: Mussolini was extremely crafty,” Sbarigia says. “He understood that moving images could help spread and consolidate his ideology. By founding a film company, he created a nation.”

The retrieved photos, dated 3 May, were shot by Luce employees Edoardo D’Accurdo and Maceo Casadei—Casadei would later cover Italy’s military activity in Africa during the Second World War. One photo shows the illuminated Colosseum behind a road flanked by two totems mounted with eagle emblems. Another shows the Vittoriano monument (Victor Emmanuel II National Monument) against a night sky; another dramatic image shows the Piazza dell’Esedra (now Piazza della Repubblica) surrounded by cars.

The photos may have been moved when Luce relocated some archival material during the Second World War, Sbarigia says. The L’Aquila collector may have acquired them in good faith at a flea market or via a website, according to Francesco Nicolò Pirronti, commander of the Rome branch of Carabinieri TPC. The collector is currently being investigated and his identity cannot be revealed until his court case has been concluded.

The Luce archive contains hundreds of thousands of photos, newsreels, documentaries and catalogues produced in Italy and its colonies from 1924 to 1962. Most of the archive is now in digital form and freely accessible online. Describing the collection as “an inimitable documentary body for the comprehension of the process of the formation of totalitarian regimes”, Unesco included the archive in its Memory of the World programme.

The archive aims to display the photos in an exhibition, reports the newspaper Il Messaggero. The images will be made available online “very soon”, Sbarigia says. “We are expecting interest from academics to peak following the summer holidays.”

With a New Bicoastal Approach, Art Palm Beach and the LA Art Show Will Highlight Climate Change in 2023