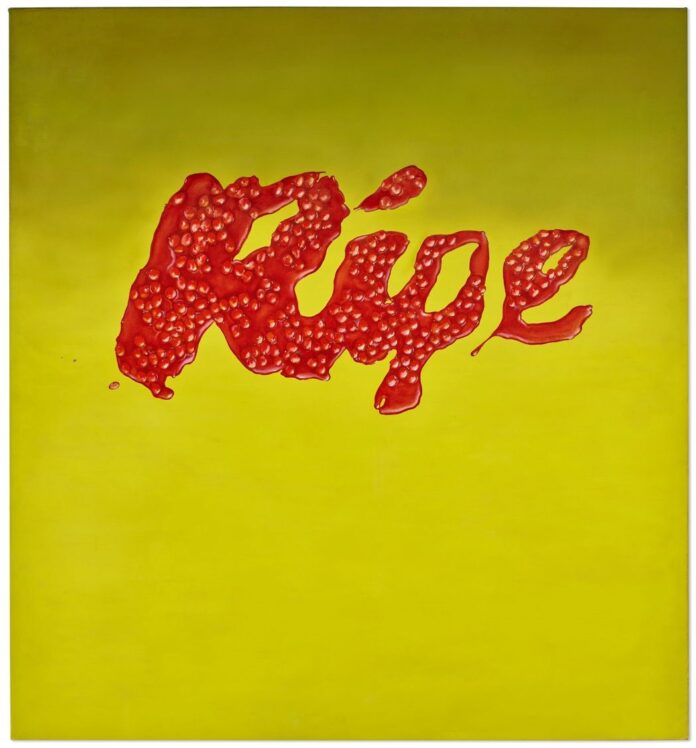 Ed Ruscha’s 1967 masterpiece Ripe, created at the height of Pop Art movement the conceptual artist is closely associated with, will be offered at Christie’s in November with an estimate of between US$18 million and US$22 million.

Measuring approximately 59 inches by 55 inches, the oil-on-canvas is one of the earliest examples of Ruscha’s three-dimensional word paintings, and one of his only 12 large-scale liquid paintings, nine of which are held in museums and art institutions, Christie’s said.

“Rendered across a vibrant yellow-green background, the four curvaceous red letters are seemingly controlled by the physical weight of the material they purport to represent,” Barrett White, Christie’s executive deputy chairman for the post-war and contemporary art department, said in a statement. “Joyful aesthetics and delightful humor culminate flawlessly in this masterful composition.”

The work has been held privately and unseen by the public for more than two decades. It will be offered as a highlight of Christie’s 20th-century art evening sale on Nov. 11 in New York.

Not only did Ripe embody the bold Pop Art aesthetic, it also inspired many of the movements that followed, such as minimalism, conceptual art, and artists including Barbara Kruger, Richard Prince, Christopher Wool, and Jean-Michel Basquiat, Christie’s said.

Prior to the auction, it will be exhibited at Christie’s Los Angeles from Wednesday until Saturday. Public viewing will be available at Christie’s Rockefeller Center galleries in New York from Oct. 30 to Nov. 11.

California-based Ruscha, 83, began painting words in 1959. His 1964 painting Hurting the Word Radio #2, fetched US$52.5 million at Christie’s New York in November 2019, setting the current auction record for the artist. The previous record was set by his 1963 work Smash, which sold for US$30.4 million at a Christie’s New York auction seven years ago.