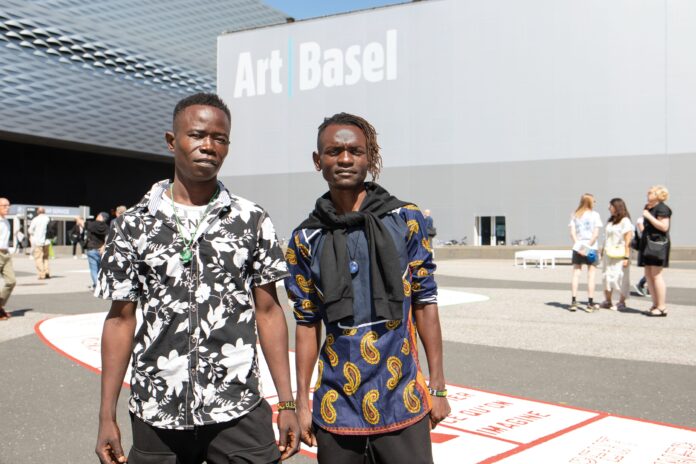 The indigenous Pende people of the Democratic Republic of Congo believed the spirits of vanquished enemies continue to wander among them, seeking bloody revenge. The only way to thwart the violent desires of the spirit is to carve figurative sculptures in wood, in which the spirits of their opposers and enslavers are caged and immobilised.

In the weeks after his death, the Pende carved a sculpture, encasing Balot’s spirit within. But today the sculpture does not belong to the Pende people. It is in the possession of the Virginia Museum of Fine Arts (VMFA) in Richmond, Virginia, US. Although the museum lent the sculpture to the Museum Rietberg in Zurich, Switzerland, in 2020, it has not yet agreed to return it to the descendants of its creators, even on loan.

The request for a loan comes from Ced’art Tamasala and Matthieu Kasiama, two Congolese artists represented at Art Basel by Berlin-based gallery KOW, and affiliated with White Cube, a contemporary art gallery based in Lusanga and co-founded by the Dutch artist Renzo Martens.

Tamasala and Kasiama are members of the Congolese Plantation Workers Art League (CATPC), a collective representing modern day Congolese plantation workers, who earn as little as $9 a month. In an interview at the fair, Tamasala says: “The statue was made for a certain purpose—and that purpose was to protect our people.”

“Now we are trying to renew our bond with it,” Kasiama says. “If the sculpture is not allowed to return home, temporarily, on loan, then we have to think about other ways to reclaim its powers.”

The artists visited VMFA in February 2020. There they discussed a temporary loan of the sculpture with Richard Woodward, then a curator of African art at the museum. “We left feeling hopeful,” Kasiama says. “But nothing has happened; we were given reasons why, but they are vague.”

In a statement, a spokesperson for the VMFA says: “As of June 2021, when VMFA was in discussions with the White Cube about loaning the sculpture, construction on the physical building of White Cube was yet to be completed, and so VMFA could not commit to lending [it]. The museum asked the business director to get back in touch in 2022, once they had exhibition dates and a standard facilities report. As an alternative to exhibiting the actual sculpture, the business director asked if the VMFA could provide X-ray images of the work for the exhibition “BALOT: CATPC, Renzo Martens” at KOW Gallery in Berlin, Germany (11 February 2022-9 April 2022). VMFA provided low res images and was in the process of sending high res images once the business director signed our standard rights and reproductions agreement. In the end, the business director did not sign this agreement, informing VMFA on 7 February 2022, that there were parts of the contract to which they could not agree.”

In February of this year, the artists created an NFT of an image of the sculpture taken by the VMFA. The museum responded at the time by launching a legal copyright claim, saying in a statement that the CATPC’s action “violates our open access policy and is unacceptable and unprofessional”.

Yesterday, at Art Basel, the artists minted more NFTs, this time of drawings and paintings they have created that explore the meaning of the sculpture to the CATPC. The artists have made 306 separate NFTs; each is on sale now for 0.2 Eth, equivalent today to $249. This would buy a hectare of land in Lusanga.

“We see the NFT as a way for us to appropriate the sculpture,” says Kasiama. “We don’t want to deny it to the people of Richmond. They can still have it—but we need it too.”

“The sculpture has been in Richmond for a long time,” Tamasala says. “Keeping it and not sharing it is a form of violence. We come from a country that has perpetual war. We don’t want war. We do not want to oppose the museum. We are not here to have a conflict with them. The only thing we want is to rekindle a relationship with the sculpture. It is important to us. But we can only know it from afar. We want to change that.”

In a statement released to The Art Newspaper a museum spokesperson says: “The VMFA conducts research on all works of art to ensure that each work in the museum’s collection is lawfully held and rightfully owned. The provenance of the Balot sculpture (title: Chief’s or Diviner’s Figure Representing the Belgian Colonial Officer, Maximilien Balot) is not in question, and it is verifiable.” They add that the “VMFA no longer intends to loan the Balot sculpture for exhibition at White Cube gallery because the minting of the NFT, through the misuse of an image under copyright protection, as well as misleading statements about the museum, have broken all trust between VMFA and the exhibition organisers.”