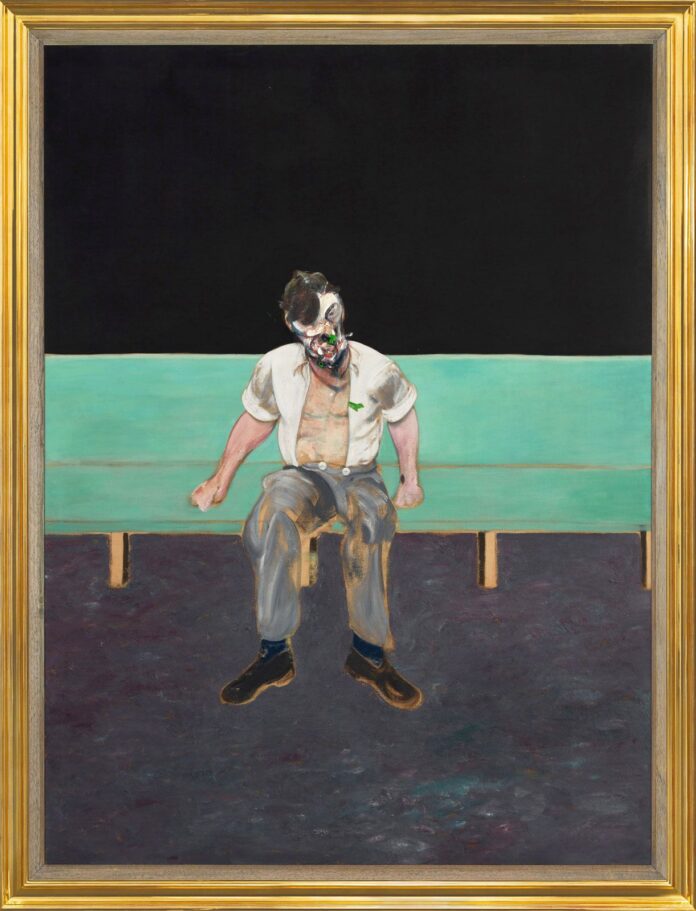 A portrait of the artist Lucian Freud by his contemporary Francis Bacon, will go under the hammer at Sotheby’s London later this month with an estimate “in excess of £35m”. The 1964 painting, Study for Portrait of Lucian Freud, has been in the same private European collection for 40 years and has been consigned to British Art: The Jubilee Auction, which takes place 29 June.

In 2013, a triptych by Bacon, Three Studies of Lucian Freud (1969), sold for $142.4m at Christie’s in New York, making it the most expensive work of art ever sold at auction at the time (the price is also an auction record for the artist which still stands). The Freud portrait consigned to the forthcoming Sotheby’s sale was also part of a triptych, which according to the auction house, was separated by Bacon into three individual works shortly after it was created (today, the left-hand panel resides in a private collection while the right-hand work belongs to the Israel Museum in Jerusalem).

Bacon’s prices at auction continue to hold up. In July 2020, Triptych Inspired by the Oresteia of Aeschylus (1981) fetched $84.6m (with fees) at a Sotheby’s livestream auction, while the architect Norman Foster sold Triptych 1986-87 at Christie’s London in March for £38.5m (with fees).

Both artists developed a complex, close relationship which began in 1944 when the painter Graham Sutherland brought the pair together. According to art world folklore, both men saw each other almost every day for 25 years and often acted as each other’s muse. Bacon is thought to have first painted Freud in 1951; the same year Freud made three suggestive sketches of his friend and rival with his shirt and trousers open (Francis Bacon, 1951).

On Freud’s bedroom wall hung Two Figures (1953), one of Bacon’s darkest, most powerful pictures showing two men wrestling on a bed in a sadomasochistic pose. However, Bacon and Freud fell out later in life. “Lucian thought Bacon’s work of the 1980s ‘ghastly’, and Bacon fully reciprocated. But Freud never lost his admiration for earlier paintings by his friend,” writes Martin Gayford in The Spectator.

Crucially, Bacon used photographs taken of Freud by the late photographer John Deakin as source material for the full-length portrait consigned to Sotheby’s. “Study for Portrait of Lucian Freud is based on a Deakin photograph taken earlier the same year, in 1964, showing Freud sitting on a bed, his arms outstretched, fists clenched, and white sleeves rolled up above the elbows,” according to a statement from Sotheby’s.

Tom Eddison, the senior director of Contemporary Art at Sotheby’s, adds: “It is hard to think of two greater artists whose lives and works are so interwoven into the fabric of our consciousness than Francis Bacon and Lucian Freud. At the same time both muses and critics for each other, it was their friendship, respect, rivalry and deep infatuation with one another, which ultimately fuelled their unequivocal artistic talents.”

Amid Mounting Pressure, the School of the Art Institute of Chicago Has Stripped Kanye West of His Honorary Degree