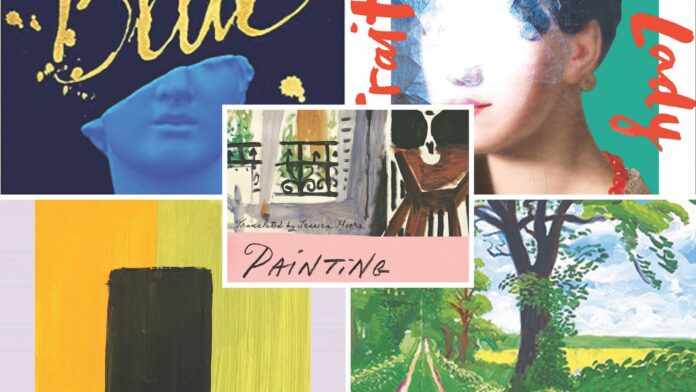 Every work of art tells a story, but what of the stories inspired by art? Art has fired the imagination of literary giants such as Émile Zola, Marcel Proust and Virginia Woolf. Entire novels have emerged from single paintings—think Donna Tartt’s The Goldfinch (2013)—while others have revisited chapters of art history, such as My Name is Red (1998) by Orhan Pamuk. Art can be a hook and a visual cue, a window into another time and place. Here are five of the best recently published art-inspired novels.

They say you shouldn’t judge a book by its cover, but the David Hockney paintings that envelop each instalment in this remarkable series give you a good glimpse of the content. Ali Smith is no stranger to marrying art and fiction—her two-part novel How to be Both (2014) was inspired by an allegorical fresco by Francesco del Cossa—and these up-to-date tales, set against a fraught political backdrop, highlight the creations of Pauline Boty, Barbara Hepworth, Tacita Dean and others.

Maylis de Kerangal’s engaging new novel, translated from French, explores the well-travelled but always surprising territory between appearance and reality. It follows Paula through her studies at the Institut Supérieur de Peinture in Brussels—where she is learning the art of trompe l’oeil—and a string of decorative painting jobs in France and Italy. An expert at imitating wood, marble and semi-precious stones, Paula is, in her own words, part of a gang of copyists, “bamboozlers of the real, traffickers of fiction”.

Rachel Cusk’s latest book is a loose fictional retelling of Lorenzo in Taos, a 1932 memoir by the American socialite and patron of the arts Mabel Dodge Luhan. It charts the relationship between an introspective woman writer we know only as M and an irascible male artist called L, who sparks within her a desire for artistic self-expression—“a dangerous part of me, the part that felt that I hadn’t truly lived”. A thought-provoking meditation on the power of art and who is lucky enough to make it.

María Gainza’s follow-up to her richly detailed debut, Optic Nerve (2019), poses questions about the nature of originality and makes a case for the oft-quoted epithet attributed to Pablo Picasso: “Good artists copy, great artists steal”. Set in the Buenos Aires art world, it follows an unnamed young woman who gets a job in an auction house and becomes obsessed with finding a legendary art forger called Renée.

“The idea of what art is—or what it could be—is there all the way through,” says James Cahill of his forthcoming debut novel. Tiepolo Blue brings together the classical forms of the Italian masters and the anarchic found objects of the YBAs. An absorbing coming-of-age story that charts the artistic and sexual awakening of a Cambridge professor in 1990s London.