Home News There is a “deal to be done” with Greece over Parthenon Marbles,... 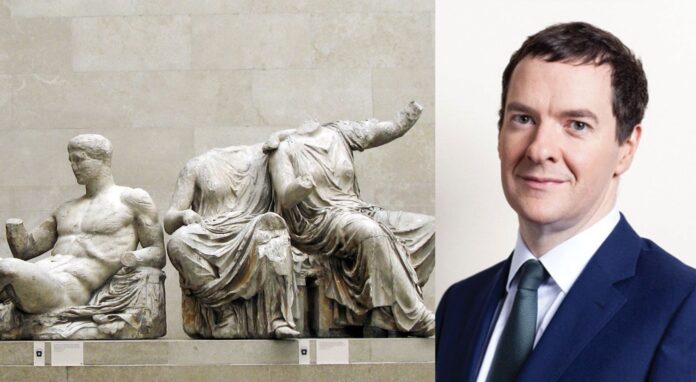 George Osborne, the chairman of the British Museum, says there is a “deal to be done” over sharing the Parthenon Marbles with Greece, fuelling the long-standing debate over the reunification of the fifth-century-BC works that have been housed at the museum in London since the early 19th century.

In an interview on the LBC radio station with Andrew Marr yesterday, Osborne said that a “deal is to be done where we can tell both stories in Athens and in London if we both approach this without a load of preconditions, without a load of red lines… Sensible people could arrange something that makes the most of the Parthenon marbles but if either side says there’s no give at all, then there won’t be a deal.”

When Marr asked if some of the marbles could “be moved to Greece at least for a while and then they would come back to London”, Osborne said that “this kind of arrangement” might be suitable though he cannot “talk for all of the trustees of the British Museum”.

Last year, the UK prime minister, Boris Johnson, shifted the decision for returning the Parthenon Marbles to Greece to the trustees of the British Museum after meeting the Greek prime minister, Kyriakos Mitsotakis. A government spokesman also told the Guardian: “The British Museum operates independently of the government. It is free, rightly, from political interference… Any question about the location for the Parthenon sculptures is a matter for them.”

The art historian Bendor Grosvenor tweeted yesterday: “The government has lately stressed this is a matter for the trustees. So for the Chair of the trustees to be saying this is very significant. Could joint title be a solution?”

A statement from the British Museum also reflects a softening stance. “The museum is always willing to consider requests to borrow any objects from the collection, we lend between 4,000 to 5,000 objects every year. For instance, 170 ancient Hellenic objects are touring Australia and New Zealand where they will reach and inspire new audiences before returning to the museum,” says a museum spokesperson.

They add: “These beautiful works of art are loved by a worldwide community and we believe that public access should lie at the heart of these conversations; too often discussions are limited to legalistic and adversarial context instead of focusing on how to share the sculptures with a wider world… deepening public access, creating new ways and opportunities for collections to be shared and understood right across the world, remains at the core of what the British Museum seeks to achieve.”

Osborne, the former UK chancellor of the exchequer, made his comments ahead of an inter-governmental meeting (date unspecified) between the UK arts minister Stephen Parkinson and the Greek culture minister Lina Mendoni. The UK government subsequently stated that “while we are always happy to discuss matters of cultural co-operation with our Greek colleagues”, the Parthenon Marbles will not be the subject of the formal talks.

Meanwhile, Greek citizens from across the UK are gathering at the British Museum on 18 June to call for the reunification of the Parthenon Sculptures. The protest also marks the 13th anniversary of the opening of the Acropolis Museum in Athens.

The fifth-century-BC statues have been housed in the British Museum since 1816 after they were removed from the Parthenon temple on the Acropolis in Athens by agents working for the Scottish nobleman Lord Elgin, the then ambassador to the Ottoman court. The sculptures went on display in the British Museum in 1817.