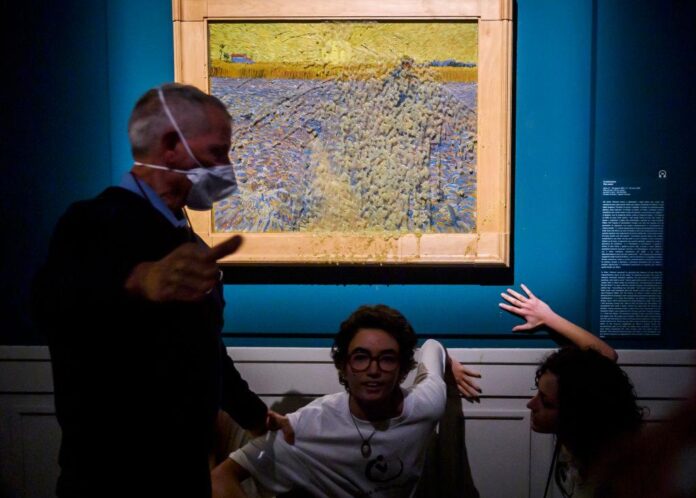 Recently, it’s felt like hardly a day goes by without hearing of yet another climate protest staged at an art museum.

It began in October, when two women from Just Stop Oil threw tomato soup at Vincent van Gogh’s Sunflowers at the National Gallery in London, and has picked up pace ever since. Just this past weekend in Rome, activists with Ultima Generazione (Last Generation) pelted Van Gogh’s and at the Prado in Madrid, two people wearing t-shirts reading “Futuro Vegetal” (Plant Future) glued themselves to the frames of two works by Goya.

But as the trend accelerates, museums are wising up to the activists’ tricks.

Guards at the Musée d’Orsay successfully thwarted a woman wearing a Just Stop Oil t-shirt and carrying a water bottle filled with soup on October 27. They disarmed her of her water bottle and she exited the building before any police had to be called to the scene.

The intervention suggested that museum guards were getting better at spotting who in a crowd might strike.

After Monet’s  was attacked with mashed potatoes on October 22, the Museum Barberini closed for five days while it heightened security measures.

Christina Haak, deputy director-general of the Berlin State Museums, said that her staff have already received extensive training and workshops, since the attacks first started.

Though most museums don’t share details about security matters as a policy, some of the measures being enforced will be immediately obvious to the visiting public.

As of November 4, Berlin museums and the Barberini in Potsdam will require visitors to store all jackets and bags in lockers before entering, with exceptions for medicine and childcare. Previously. bags up to size A4 had been permitted. Now, Haak explained, “we know from the incidents that some of the equipment that people carried in for the attacks was in very small bags.”

Beate Reifenscheid, chair of the International Council of Museums in Germany, speculated that phones and cameras may also eventually need to be confiscated. “The public awareness is mostly spread by the internet and social media.”

Even though the attacks have been concentrated in Western Europe, museums internationally are also starting to pay closer attention.

John Barelli, a security adviser to cultural institutions who was previously chief security officer at the Metropolitan Museum in New York, recalled introducing back checks after 9/11.

“Over a five- or six-year period, vandalism went down because we checked people at the entrances,” he said. “It’s definitely a deterrent. People don’t know how exactly they’re going to get searched so they’ll probably go elsewhere.”

He also suggested having plainclothes officers patrol with a careful eye for would-be attackers. “They usually come in twos and threes and somebody is taking a video. They may have some type of banner… a lot of them are young. Age may be something that they can look at.”

“Institutions should not assume their guards, docents, visitor services staff, and the like are all aware of what is going on and have seen the videos on social media,” said the director of security,at the Isabella Stewart Gardner Museum in Boston, Anthony Amore. “Rather, they should carefully examine every bit of the modus operandi of the protestors and educate their teams as to what to look for from potential attackers.”

There are also patterns in terms of the type of paintings that have so far been targeted. Many are Impressionist or post-Impressionist, which likely reflects a desire to make headlines by going for universally cherished masterpieces.

Security teams looking to concentrate their efforts could perhaps lower occupancy in certain rooms or put up stronger barriers over specific works.

“A lot of museums do not like to put glass over the painting because it distorts the beauty,” said Barelli.

Most experts did not think it was particularly likely that the attacks would escalate to artworks that aren’t protected by glass.

“They really want to get attention but they don’t want to get in trouble,” Barelli suggested. “It’s not a very serious offence, in the U.S. anyway, if nothing is damaged. If somebody slashed a painting it’d be very serious and they would probably get jail time.”

Other museum officials are far from comforted by this prospect. “As Victoria Reed at the Museum of Fine Arts, Boston, pointed out, the protestors haven’t the technical knowledge to assess whether a painting will be harmed by their actions,” said Amore. “And, of course, the frames—which are also works of art—are susceptible to damage.”

Then there’s the fear of copycat acts of vandalism unconnected to climate protests and not planned in the same way. Some suspect this happened already on October 30, when an assailant who has not so far been linked to any climate group threw fake blood at by Henri de Toulouse-Lautrec at the Alte Nationalgalerie in Berlin.

Most of the experts who spoke to Artnet News agreed that the major institutions that have so far been targeted should be capable of rising to the challenge with their existing resources.

However, “it can be incredibly hard to prevent a determined adversary who wants to cause harm in some way, shape or form,” said Jordan Arnold, global chair of the risk management firm K2’s private client services. “To the extent that security and insurance costs begin to increase across the board, it could deeply impact available funding for other aspects of a museum’s operation.”

“Museums should support and advertise their commitment to renewable energy and adopting green practices,” suggested Frank A. Demes of Security Risk Management Consultants. “Some museums have adopted LEED certification in an effort to save water, reduce greenhouse gasses, improve efficiencies and save money. Progressive and interactive programs can be adopted to shed light on the climate crisis and educate the public.”

Museums are “open, safe spaces”, said Christina Haak. “In order not to turn museums into high-security areas like airports, it’s now important for us to find a balance between security measures that protect our visitors and artworks and preserving museums as places of freedom.”

“Absolute security cannot and never will exist for the objects because otherwise we’d have to put them in storerooms and let nobody in.”

“I’m of the opinion that the international community of museums must now embrace the new role of museums as a site of social protest,” said Haak, by combining the task of preserving and presenting cultural heritage with becoming “lively places of public discourse, but not a protest platform. That’s a challenge, I must say.”