Home News How The Armory Show became a curatorial destination 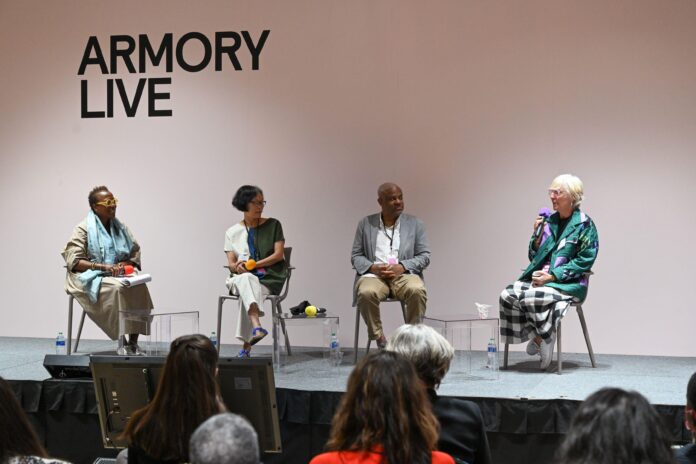 In her opening remarks for the first instalment of The Armory Show’s 2022 Curatorial Leadership Summit—a virtual event held in May ahead of the invitation-only, day-long symposium at the Javits Center during the fair—chair Mari Carmen Ramírez began the programme, “What’s in the X?: Making Sense of the Latin American/Latinx Art Debate”, with a question.

“Why fuss about these labels?” she asked reflexively, referring to the delineation between Latin American and Latinx art. She continued, “As post-structuralism taught us, to the extent that words can express conflict, they can also assist in bringing about change. That is, words indeed matter.”

Ramírez is the curator of Latin American art and founding director of the International Center for the Arts of the Americas at the Museum of Fine Arts, Houston. As the chair of this year’s summit—a closed-door symposium that convenes curators and museum directors from around the world to discuss critical issues and challenges in the field—Ramírez aims to inspire dialogue around timely issues in contemporary art, namely the discrepancies between the critical and market reception of Latin American art (art produced by artists living in the more than 30 countries below the United States’ southern border), and Latinx art (art produced by US-born or -based artists of Latin American descent). More broadly, the programme will address issues of marginalisation on the basis of race and gender, reflecting in part on the charged debates surrounding the relatively new gender-inclusive term “Latinx”.

Following the virtual panel in May that brought together academics and theorists, the in-person talks at the Javits Center on 9 September will gather curators, museum directors, market specialists and artists.

The case for curatorial debate

The annual summit launched in 2018 as part of an expanded Armory Show section comprising curated special programmes, exhibitions and installations. Apart from a public keynote presentation to engage a broader audience (as well as this year’s virtual panel, which is publicly available on the fair’s website), access to the event is by invitation only, with around 75 international museum directors and curators attending each year.

“We created the Curatorial Leadership Summit five years ago to provide curators with the opportunity to have a candid dialogue about relevant topics in their field,” says Nicole Berry, The Armory Show’s executive director.

Each year, the summit chair develops the subject, framework and programming. Typically, the event has consisted of one or multiple discussions with selected panellists, after which there are group discussions or breakout sessions. Past editions—chaired by the curators Naomi Beckwith (2018), Dan Byers (2019), José Carlos Diaz (2020) and Valerie Cassel Oliver (2021)—have tackled issues including cultural appropriation, censorship and identity politics.

“Programming a day of dynamic closed-door discussions gives the attendees the time and space to listen to colleagues, exchange perspectives and gain new tactics for championing artists in ways that expand artistic canons and markets,” Berry says. “The discussions and new connections can lead to fresh strategies that effect necessary change within institutions.”

The Armory Show’s emphasis on curatorial leadership and institutional partnerships has become one of its main selling points. The fair’s programming aims to connect the often-siloed fields of curatorial practice, institutional values and the art market. Whether or not this is a strategic calculation on the organisers’ part to bring more curators and museum professionals to the fair, hosting these dialogues in a commercial context draws a direct link between curating and collecting.

Berry sees this as an avenue for effecting change in the market and museums. “Many international curators already attended The Armory Show but rarely had time to have meaningful and productive conversations,” she says. “With the many issues curators face in their field, we decided the fair was the perfect place to carve out time for these important conversations to happen.”

The focal point of Ramírez’s 2022 programme, and the summit as a whole, is confidence in the capabilities of curators and arts institutions to influence the market by promoting social change and shifting historical paradigms.

“It’s important for the discussion around previously underrepresented areas like Latinx to take place in the context of a mainstream art fair like The Armory Show in order to bring awareness to what these areas represent, and why they should be taken into account,” Ramírez says. She hopes the summit can reframe the intersections and contrasts of two fields that have become mired in misconceptions.

“In this context, Latin American and Latino/Latina/Latinx can be considered operative constructs, useful for identifying two extremely broad, culturally specific communities of artists and the distinct networks of producers and agents that support them,” Ramírez says, emphasising that “each one of these heterogeneous fields stands for a multiplicity of histories and cultural experiences”

Ramírez says she selected the summit’s panellists based on their associated institutions and varied points of view. “Latinx is an umbrella term that encompasses many different racial and ethnic groups,” she says. “I tried to incorporate as many of these voices as I could to project the broad diversity and heterogeneity of this field.”

While there are core commonalities among Latin American and Latinx artists—often related to language, religion and experiences of colonialism—recognition of Latin American art by museums, collectors, academic institutions and the market has far exceeded that of diasporic Latinx art.

“Latin American art has a much more solid infrastructure,” Ramírez says. “There’s a high-end market and institutional demand for it, not only in the United States but all over the world.” Since the development of specialised Latin American art auctions, spearheaded by Sotheby’s in 1979, recognition of and prices for the work of artists in this sector have grown exponentially, bolstered by major museum acquisitions in the 2000s, and resulting in the creation of dedicated curatorial departments and academic programmes at major institutions.

Conversely, works produced by US-based artists of Latin American descent lack such a robust support system and collector base. This is not for lack of compelling work, Ramírez says, but reflects pervasive exclusionary practices rooted in ignorance, prejudice and marginalisation. Nevertheless, she is optimistic about the field’s future.

“Latinx art is not something that can be ignored anymore,” she says. “We are not talking about a market fad or an art world trend—it has to do with people, with profound changes in the make-up of our society. Latinas and Latinos make up the largest and fastest growing sector of this multicultural society. That’s not my opinion, it’s a fact.”

“Our institutions have to pay attention sooner or later because these are the people coming to our institutions,” Ramírez says. “They are an integral part of our communities.”

Music Legend Lionel Richie Is Apparently an Art Collector, and He Bought a Trio of Works by Calida Rawles at Frieze London