Home News How to turn a flour mill into a world-class museum: architect Alejandro... 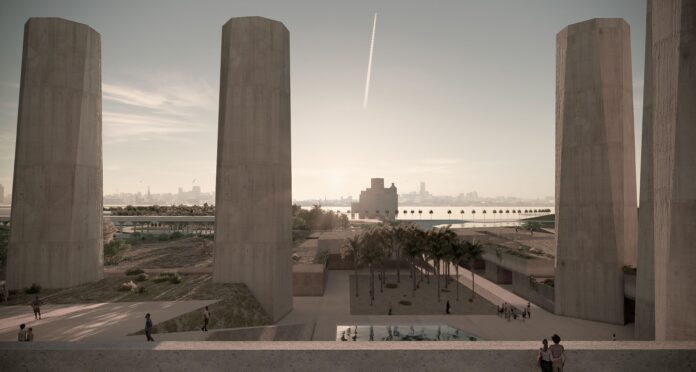 Alejandro Aravena, the Pritzker Prize laureate who oversaw the 2016 Venice Architecture Biennale as its artistic director, and his firm Elemental secured the commission for the ambitious Art Mill Museum in 2017, beating proposals from nearly 500 practices for the project that will convert a historic waterfront flour mill in Doha, Qatar, into a world-class museum.

The vast new Modern and contemporary art institution will be sited on the Corniche, a waterfront promenade opposite Doha’s old port, and is due to open in Doha in 2030. It will form the third point of a “museum triangle” that includes I.M. Pei’s Museum of Islamic Art, completed in 2008, and the sprawling mass that is Jean Nouvel’s Qatar National Museum, which opened to the public in 2019.

The main building will have 80,000 sq. m of interior space, including 23,000 sq. m dedicated to galleries and exhibition space. The rest will contain offices, cafés, conservation labs and educational facilities. The broader project speaks to how modern museums are diversifying their income streams, with a public garden situated alongside a “creative village” that will provide visitors with craft workshops, shops, restaurants and cinemas.

The flour mill dates to 1969 and comprises 64 concrete silos where grain was processed; it was still in operation as recently as the 1980s. Aravena says he feels “at ease having these pre-existing structures to work with”. “Constraints such as these are no bad thing,” he says. “They can offer us clues as to how to proceed. We certainly don’t want to demolish them, not least because of the amount of energy that has already been consumed in their construction. We need to harness that.”

In addition to examining the composition of the silos themselves, Aravena and his team are gaining a better understanding of the geography, climate, local traditions and cultures. This diverse research project will inform how the mill is turned into a contemporary art museum filled with the sort of large, flexible spaces that are now considered essential in a contemporary institution. “What is fundamental is to create something reversible,” says Aravena. “What works today for a museum might not work in the future.”

The harsh desert conditions of Qatar have also been instrumental to his thinking. As a native of Chile, he knows how to plan for the inevitability of freak weather events like earthquakes. “In a seismic country, you have to have the structure of the building as far away from its centre as possible,” he explains. In desert conditions, sandstorms and extreme radiation are also factors to be addressed. “The aim is for the building to last, and to do that it needs to be suited to the context,” he says. “But we also want the visitor to feel reflected and interpreted by this building. I want to capture this society’s sensibility and sense of pride. This will be a calm building.”

This project is Elemental’s first museum commission. Aravena believes this is a strength; if his team lack institutional experience, they do not have preconceptions about how a museum should be. “It stops you following the paradigm models,” he says. “We came in with no bias about museum architecture, and no real knowledge of the region.”

Elemental is best known as a responsive and socially motivated practice, rather than a producer of attention-grabbing buildings. It has frequently worked in informal settlements in South America, developing ways to improve the inhabitants’ existing conditions. It rose to fame with projects like the “half a good house” concept, where a property comes with an equivalent conjoined empty space that occupants can gradually expand into.

“Much as we continue to pursue projects around housing and community and slum upgrading, we also like to tackle these big projects, to keep our design tools sharpened,” Aravena says. “We are living in an urban era. Many people migrate to live in cities. We need to support them, to house them, but also give them opportunities for learning and leisure. I believe cities are measured by what you can do in them for free. That is quality of life.”

Carrie Mae Weems Among Artists Added to SFMOMA Board of Trustees