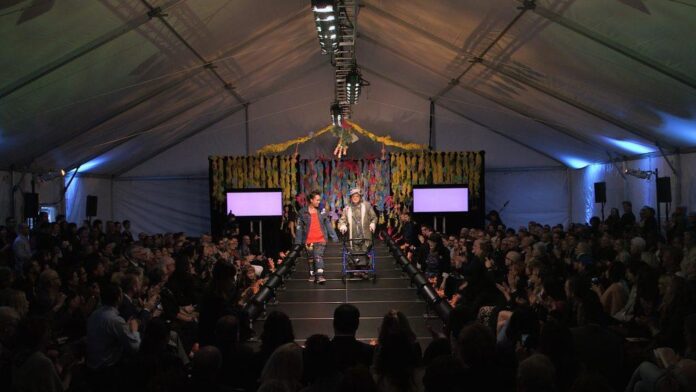 This weekend, the Oakland Museum of California will host the annual Beyond Trend Fashion Extravaganza, an annual must-see event where more than 75 artists who work with the nonprofit Creative Growth model original designs.

Creative Growth was founded in 1974 at the East Bay home of Elias and Florence Katz, who who wanted to form an organization that would provide art resources for individuals with disabilities. More than 140 artists use the Creative Growth Studios to make work across a range of media including ceramics, painting, drawing, and digital arts. Professional artists provide support and mentorship in the 12,000-square-foot studios that formerly housed an auto repair shop.

The Beyond Trend fashion show began as a one-time event, but has become an annual showcase for the artists. In an exclusive interview with Art21 filmed back in 2019, Creative Growth’s director of external relations, Tom Di Maria, talked about the impact of the event, which for many artists features work that’s been years in the making.

“Typically, they’re visual artists. They work at a table and their work goes on a wall,” Di Maria says. “But when they get to express themselves physically, and wear their art, they become performance artists. It really adds this other dimension. It becomes this great celebration of artistic creation.”

One artist, Daniel Gardiner, shows off his “first skirt-dress,” a red and black velvet number that he plans to wear in the fashion show. “Even though I have cerebral palsy and [am] also legally blind, I don’t let that stop me,” he tells Art21. “So any of you that’s in the audience that is listening to this—even if you’re legally blind, if you’re deaf—if I can do art, with all my disabilities, nothing should stop you.”