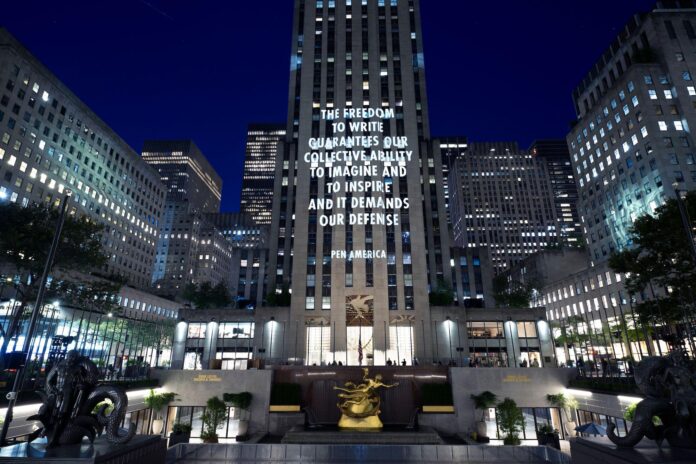 This week, 30 Rockefeller Plaza—a building infamous in modern art history for its then-director Nelson Rockefeller’s 1933 destruction of a major Diego Rivera mural over his objections to its allegedly socialist imagery—is serving as a shining beacon in support of freedom of expression. Following a string of violent attacks on writers and journalists, including the organisation’s former president Salman Rushdie, the non-profit PEN America teamed with conceptual artist Jenny Holzer to create a large-scale projections on the façades of 30 Rockefeller Plaza, 610 Fifth Avenue and 620 Fifth Avenue.

Nightly through 18 September, beginning at 8pm, the words of more than 60 famous writers, activists and artists are scrolling over the buildings’ exteriors. One, from Rushdie, states powerfully: “The creative act requires not only freedom but also this assumption of freedom.” Other texts were contributed by Pussy Riot member Nadya Tolokonnikova, Iranian-American writer Azar Nafisi, the critic Henry Louis Gates Jr. and dystopian visionary Margaret Atwood. Each text, rendered in the distinctively blocky, sans serif typeface Holzer fans will recognise from her famous Truisms series (1978-87) and other works, moves up the buildings façades in solemn procession.

The work, titled SPEECH ITSELF (2022), also marks the centennial of PEN and calls attention to its increasingly dire warnings about the erosion of free speech, freedom of the press, freedom of expression and other core pillars of democracy in the US and beyond.

“With the installation and Jenny’s vision, we are really meeting the moment to defend against the peril and threats to our basic freedoms, which are really fundamental rights to communicate without fear, to write and read as we choose,” says Julie Trébault the director of PEN America’s Artists at Risk Connection programme. “The writing that is highlighted in Holzer’s work would not be possible without a robust right to free expression.”

Trébault also cites the growing prevalence of online harassment of journalists, fights over free speech on university campuses, aggressive book bans and multiplying laws intended to curtail what can and can’t be taught in schools in numerous US states as mounting evidence of the assault on democratic freedoms. A recent PEN America report, for instance, found that proposed laws including educational gag orders censoring subjects such as race and LGBTQ topics increased 250% from 2021 to 2022.

“The attacks, the censorship, it’s a playbook,” Trébault says. “You start by banning books and banning subjects in school—that doesn’t lead to a better society, we know where it leads, and that’s really troubling.”

The Palace Forbade Prince Harry From Defending Himself After an Eton Art Teacher Accused Him of Cheating, His Memoir Reveals