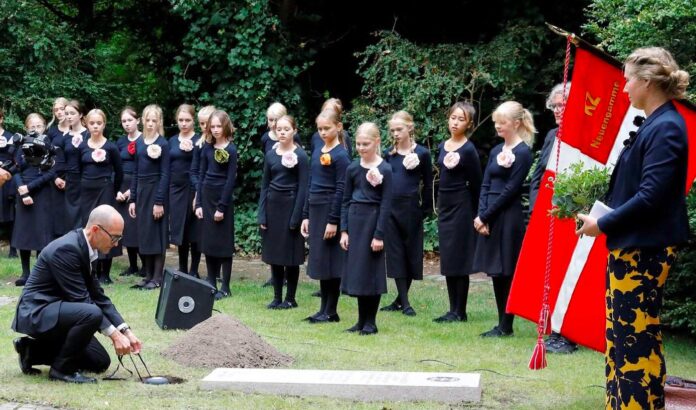 The Wellcome Collection in London has returned an urn of human ashes for burial in Denmark, after research identified the remains of a young artist and member of the Danish resistance, who died in the Neuengamme concentration camp in northern Germany in 1944, aged just 26.

The research, outlined in a statement on the museum’s website this morning, confirmed that the ashes in the urn were human, and allowed the descendants of Preben Holger Larsen to be traced. He had been listed on a Danish memorial as one of 151 freedom fighters whose remains were never found after the war. They have now been buried in a ceremony at the Ryvangen Memorial Park.

The urn had not been displayed and is not being illustrated, but two photographs have been released by the memorial park showing Larsen as a smiling young man, and hollow-eyed at the time of his arrest.

Larsen worked as a tool maker but was a gifted artist, poet and writer. After military service in the early years of the war, he was co-founder of an illegal resistance magazine against the Nazi occupation of his country. When the presses were raided in May 1944, 52,000 copies of the magazine were seized and destroyed, and workers included Larsen deported to work in camps in Germany, where he died just six months later.

The urn was on a long loan from the Wellcome Collection to the Science Museum. Registered to the former in 1967, it is thought to have been given years earlier by a Mabel Murgatroyd, widow of Frederick Murgatroyd, a lieutenant colonel in the Royal Army Medical Corps and one of the first to enter the Bergen-Belsen death camp. Murgatroyd died in 1951 and it is not known how he came by the urn which carried Larsen’s name. The urn and register were matched and studied for the first time by a Wellcome Collection researcher working in the Science Museum stores in August 2019.

The statement says the museum is “confident that the remains are those of Preben Holger Larsen.” The Wellcome Collection and Science Museum leadership agreed unanimously that the urn should be deaccessioned and returned to Denmark for burial.