Home News Looking for a Rising Star? Here Are 6 Artists Poised to Break... 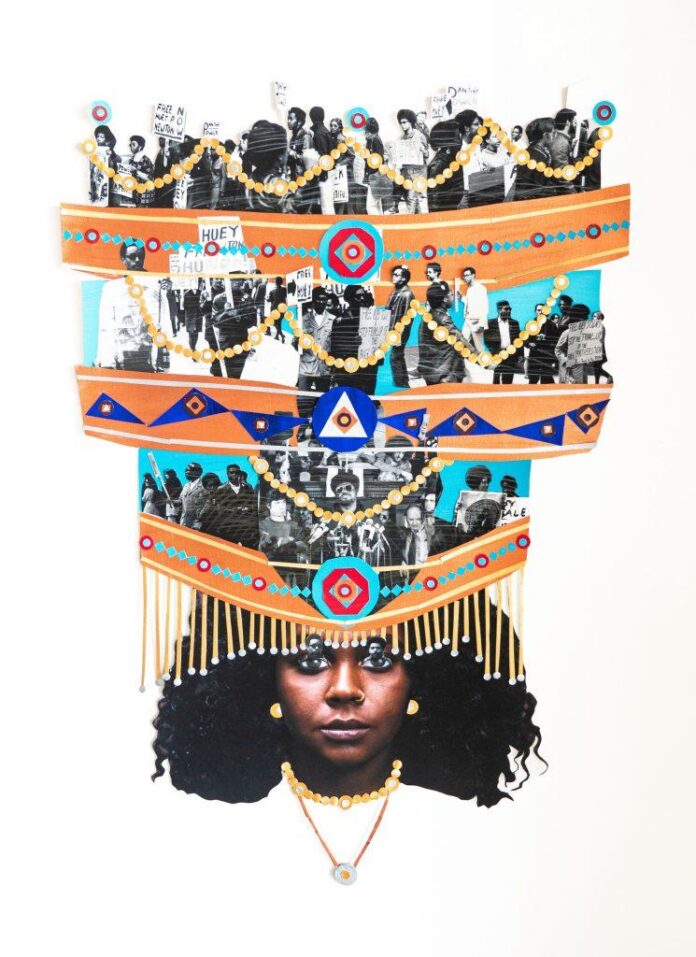 New York City is officially back in business after the summer hiatus. The Armory Show, Independent 20th Century, and a bevy of other fairs descended on the Big Apple last week, and there was no shortage of talent to discover. Our Artnet News Pro team fanned out across the city to explore the major fairs and bring you six artists who are set to break out or reach the next stage in their careers. 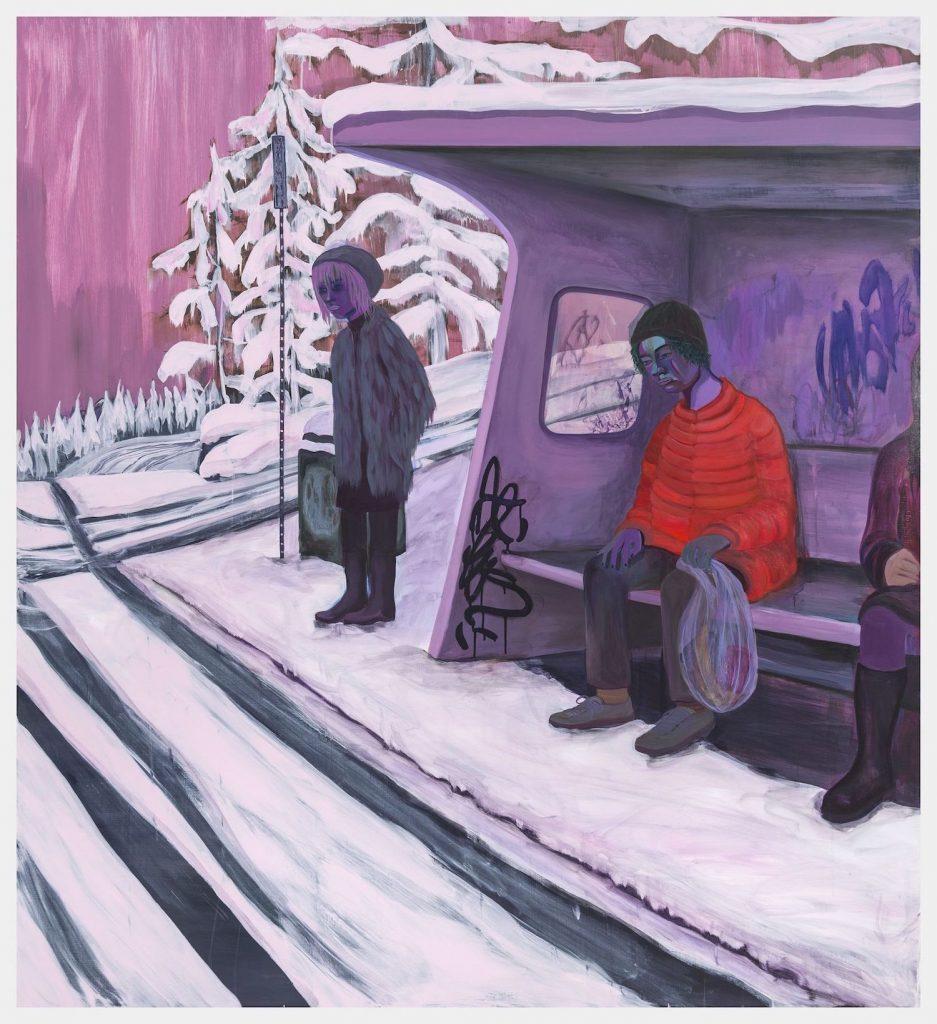 Who: Danielle Roberts, a Stockton, California-born artist who studied at Hunter College whose striking color palette of violet and purple convey a sense of sadness, foreboding, and intrigue. The palette has “definitely has brought her attention, and also her fusion of youth culture and themes of disaffection and alienation,” said Andy Freiser of Fredericks & Freiser.

Based in: Brooklyn, New York

Showing at: Fredericks & Freiser at the Armory Show

Why You Should Pay Attention: The two works the gallery brought to the Armory sold out swiftly, including one to top collectors Herb and Lenore Schorr. Although Roberts is still early in her career, her supporters are “top tier,” according to Freiser, and include Pete and Michelle Scantland and the Ashti Foundation in Lebanon. Roberts was recently included in the exhibition “Women of Now” at the Green Family Foundation in Dallas and had a solo show in San Francisco with Friends Indeed.

Notable Resume Line: Roberts was the only in-person studio visit Freiser made during quarantine, after meeting her during her second year of graduate school at Hunter.

Up Next: Her first solo show at Fredericks & Freiser New York is set for February 2023. 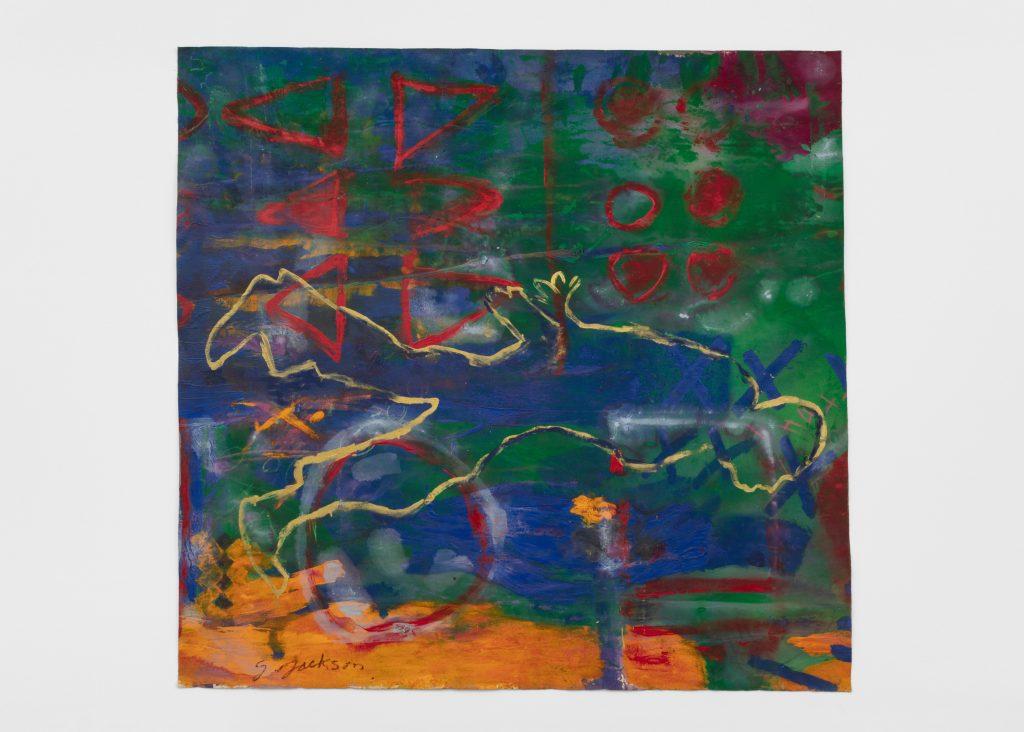 Who: Born in 1936 in Chicago, Gerald Jackson moved to New York in 1963 and became part of a thriving downtown art and music scene, alongside the likes of Peter Bradley, McArthur Binion, Keith Haring, and Stanley Whitney. He’s made paintings, assemblage, collage—some abstract, some representational, often featuring symbols and hieroglyphs of his own invention.

Based in: Jersey City, New Jersey

Why You Should Pay Attention: He’s been long in the collections of MoMA and the Met. In the past year, museums including the Whitney, the Studio Museum in Harlem, and the Hammer joined the fray. Writing about his exhibition of drawings and collages at White Columns last year, the noted “Jackson’s syncretic imagination…The stylish figures evoke a new archetype—the laid-back superhero.”

Notable Resume Line: In 1983, Lorraine O’Grady included Jackson in her historic “Black and White Show” at Kenkeleba Gallery in the East Village. In 2012, magazine published an interview between Stanley Whitney and Jackson as part of its oral history project. 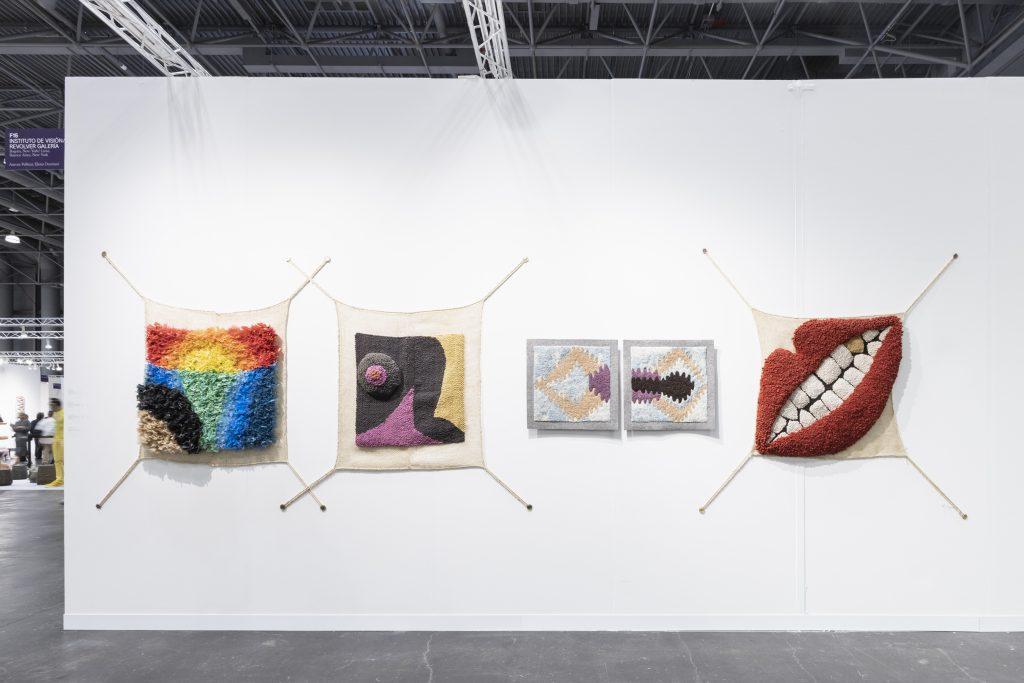 Who: Aurora Pellizzi pushes the boundaries of a variety of pre-industrial textile techniques (such as natural dyeing and back-strap loom weaving) to create three-dimensional works that blur the lines between sculpture, craft, and painting. Her compositions often center on the bodies of the women who have traditionally been anonymized in the labor of textile production, giving her practice a playful but vital metatextual layer.

Based in: Mexico City

Prices: Works in the booth ranged from $8,000 to $16,000 each. Nearly all had sold by Friday afternoon, according to Instituto de Visión founder Beatriz López.

Why You Should Pay Attention: Aside from the strong demand for her works during the opening days of the Armory Show, Pellizzi was the subject of a solo exhibition at taste-making Tribeca gallery Canada last fall, in conjunction with the publication of a new catalogue on the same body of work.

Notable Fact: The artist’s incorporation of single-use plastic in select pieces began with her desire to help the victims and rescue workers of the 2017 earthquakes in Mexico. She turned her studio over to the production of mattresses filled with this material in the immediate aftermath of the disaster, and a portion of sales for the associated works goes to the nonprofit Brigada de Rescate Topos Tlatelolco.

Up Next: Exhibitions of Pellizzi’s works will debut at the Franz Mayer Museum in Mexico City in October, and at the Fitzpatrick Gallery in Paris in November. 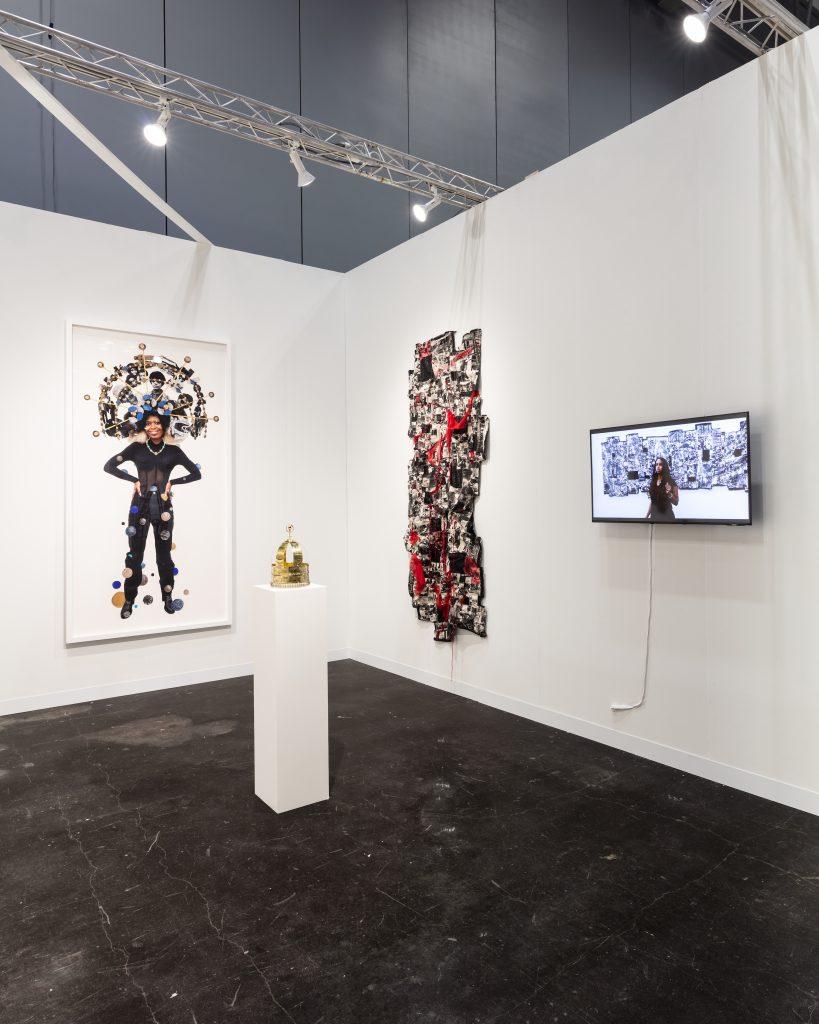 Who: An interdisciplinary artist whose work encompasses collage, assemblage, video, performance, and sculpture, Helina Metaferia is an MFA graduate of Tufts University’s School of the Museum of Fine Arts in Somerville, Massachusetts.

Based in: New York

Showing at: Addis Fine Art Gallery at the Armory Show

Why You Should Pay Attention: Metaferia is part of the Wide Awakes, the political art activist group founded by Hank Willis Thomas and Eric Gottesman that staged numerous events in the run up to the 2020 election. Her work at the fair grew out of those happenings, and workshops that she was staging with children to teach them about the history of systemic oppression, centering the stories of Black women.

The artist’s collages combine photographs Metaferia takes of workshop participants with snippets of historic photographs and documents that she finds in archives and libraries. “I scan each of them, and each collage has a bibliography,” she told Artnet News. “It’s really about uplifting BIPOC women and their labor, and making sure it’s not forgotten.” Metaferia also works in less saleable mediums of video and performance.

Notable Resume Line: Metaferia had a solo show at the Museum of Fine Arts, Boston, and is an artist in residence at Silver Art Projects at the World Trade Center in New York. Institutions including the Los Angeles County Museum of Art, the RISD Art Museum in Providence, and the Schomburg Center for Research in Black Culture in New York have snapped up her work for their collections.

Up Next: In 2023, Metaferia will be featured in the Sharjah Biennial in the United Arab Emirates and the Tennessee Triennial through the Frist Art Museum and Frisk University Art Gallery. But first, she is in no fewer than four group shows this fall, including a traveling exhibition from Independent Curators International at New York’s Africa Center and one at Locust Projects in Miami. 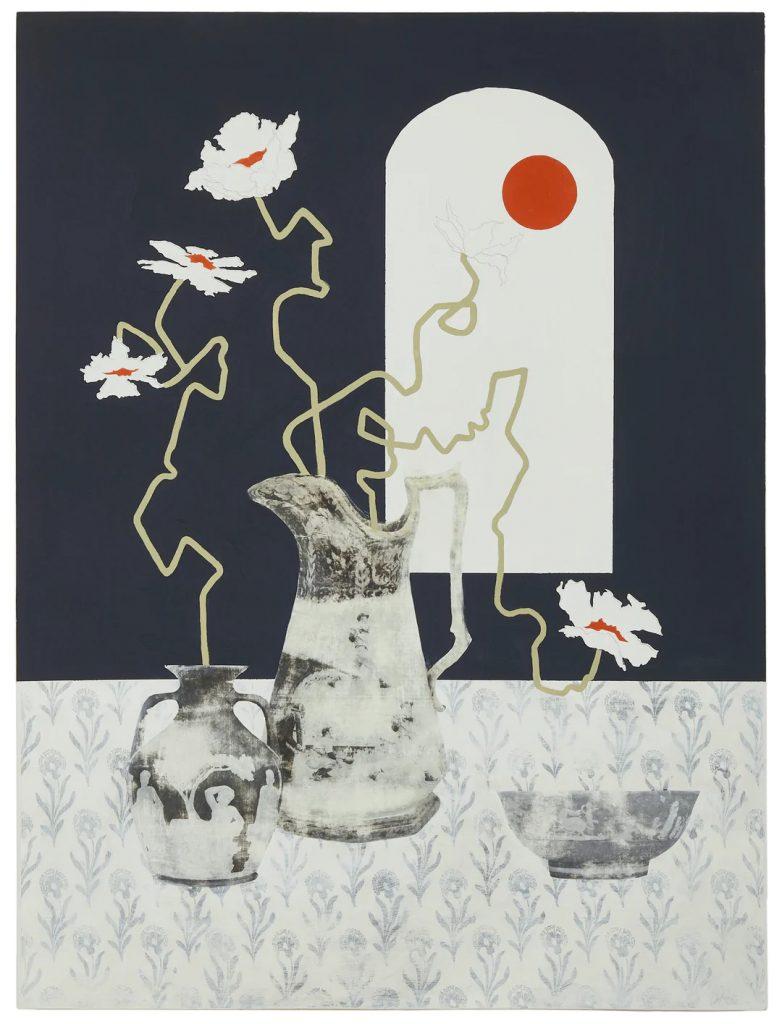 Lizzie Gill, (2022). Courtesy of Emily McElreath and the artist.

Who: Lizzie Gill, a painter and sculptor who got her undergraduate degree in fine art at Skidmore College in Saratoga Springs.

Based in: Sharon, Connecticut

Why You Should Pay Attention: Two of the artist’s largest and most expensive works sold in the fair’s opening days. Gill makes striking mixed media still life works of urns and china decorated with image transfers of black-and-white images, like a newspaper photo of the moon landing. She fills the vessels with stylized red or white flowers, their petals embellished with marble dust emulsion Gill has piped onto the panel with a cake piper. This nod to feminine domesticity contrasts with the historic images she uses to decorate the breakable objects, depicting a fragile history. “It all started with my mom giving me a box of fine china,” the artist told Artnet News. “It’s inspired by reframing heirlooms and how they’re passed down in a matriarchy. This is my way of reconciling my duty to these objects.”

Notable Resume Line: Gill just finished a residency at Wassaic Project, the hip nonprofit artist colony some two hours north of New York City. She also had two solo shows this year, at Troutbeck Gallery in Amenia, New York, and Standard Space in Sharon. Her work as an illustrator has also appeared in publications including the .

Up Next: It’s back to the studio for the artist, but once Gill has made some more work, McElreath is already thinking ahead to the next opportunity to collaborate. 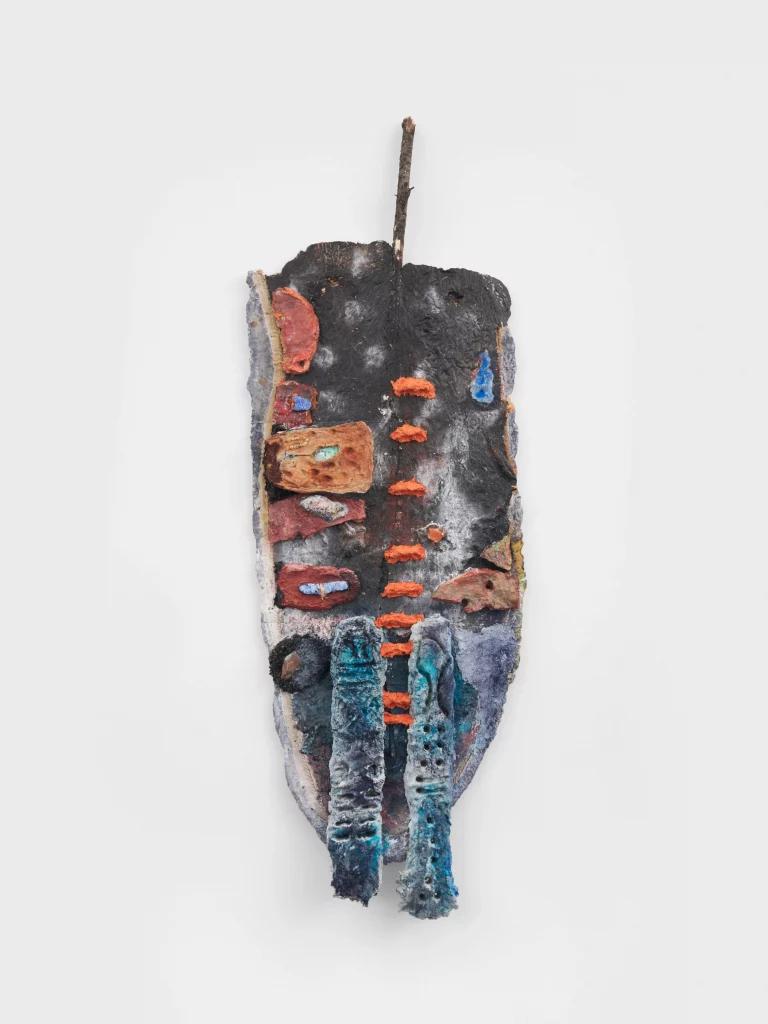 Who: Nickola Pottinger is a Jamaican-born sculptor and curator who received her BFA from Cooper Union in 2008. Since then, her work has been displayed at Parker Gallery in Los Angeles as well as Deanna Evans Projects in New York City. She works with paper pulp and found objects to create graphic, folkloric wall pieces that she calls “reliefs,” which abstract both Jamaican proverbs as well as scenes from the artist’s own life.

Based in: Brooklyn, New York

Showing at: Mrs. at the Armory Show

Why You Should Pay Attention: Listed as a stand-out in the Times’ review of the Armory, her work attracted crowds consistently throughout the fair. These particular pieces incorporate materials found on her block in Brooklyn, and the gestural compositions reference the artist’s interest in dance and communication through the body. The gallery sold one sculpture and one wall relief during the fair.

Notable Resume Line: Prior to the Armory, her work was most recently on view at this year’s New Museum Triennial, “Soft Water Hard Stone.”

Up Next: Her work is currently in a group exhibition, Elective Affinities, at Chapter through October 8. She will also have a solo exhibition at Mrs. in 2023.