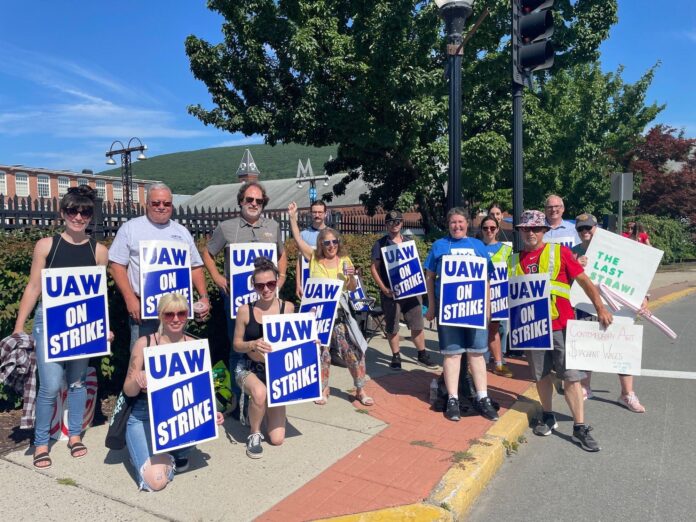 Dozens of unionised workers at the Massachusetts Museum of Contemporary Art (Mass Moca) in North Adams, Massachusetts went on a one-day strike today (19 August). Members of the museum’s union, which represents around 100 full-time and part-time employees working as educators, curators, custodians, museum attendants, admissions staff, art fabricators, technicians and more, voted 96% in favour of the one-day strike. The union announced its plans to strike last week in an effort to call attention to the ongoing bargaining process with Mass Moca’s administration.

Workers at the museum began organizing in the fall of 2020 and officially voted to unionise in April of 2021. Maro Elliot, a member of the organising and bargaining committees, and the museum’s manager of institutional giving, describes the current state of negotiations as “disappointing”. The union and museum leadership have yet to agree on a first contract.

Issues that prompted the union to organise today’s strike are related to wages, benefits, grievance and arbitration procedures, union security and pathways to advancement at the museum. Ahead of the strike, the union launched a fund that will enable employees who lost a day of pay because of their participation to still be compensated.

“We are still far apart on a number of critical issues that are very important to us and our members,” Elliot says. “The union is disappointed by the change in tenor from the museum that has happened since negotiations started. We found the museum to be more agreeable toward the union during the organising and voting period. However, the museum has been far more antagonistic toward the union during the time that we have been bargaining, and I place a lot of responsibility on the tactics being used by the museum’s legal representation.”

The average wage in the Mass Moca bargaining unit is currently $17.30. However, about two thirds of the bargaining unit’s members make under $15.50 per hour. The union is seeking a minimum rate of $18 per hour for the first year of the contract and increases in 2023 and 2024 that would raise staff compensation closer to $20 per hour by the end of the contract. However, according to the union, Mass Moca’s administration is proposing a $16 per hour minimum and no guaranteed increases in 2023 and 2024.

The union has filed a number of unfair labour practice charges against the museum with the National Labor Relations board (NLRB). One recent complaint was filed following a promise the museum made in regards to “additional raises” for certain employees if they could convince the union to lower its wage demands.

The museum remained open today despite the union’s walk-out. The Berkshire Eagle reported that the museum’s upper-level staff are covering for those striking today. While the strike is only planned to last one day, Elliot says the union is open to considering additional actions.

“While we respect our employees’ right to strike as a means of expressing their views, we are also disappointed in their decision, given the positive and collaborative environment that we have worked to foster,” a museum spokesperson says. “Throughout negotiations, we’ve consistently demonstrated a willingness to listen and genuinely consider the union’s demands—and when their proposals provided for a positive employee experience, and supported our museum culture of teamwork, collaboration and excellence, we welcomed and worked with those objectives.”

The Mass Moca union is part ofLocal 2110 of the United Auto Workers (UAW), which also includes workers at cultural institutions, nonprofits and museums across the Northeast and beyond such as the Museum of Fine Arts in Boston, the Portland Museum of Art in Maine, the Whitney Museum of American Art, the Guggenheim Museum, the Jewish Museum and elsewhere.