Home News More Than 1,500 Part-Time Faculty Are on Strike at the New School,... 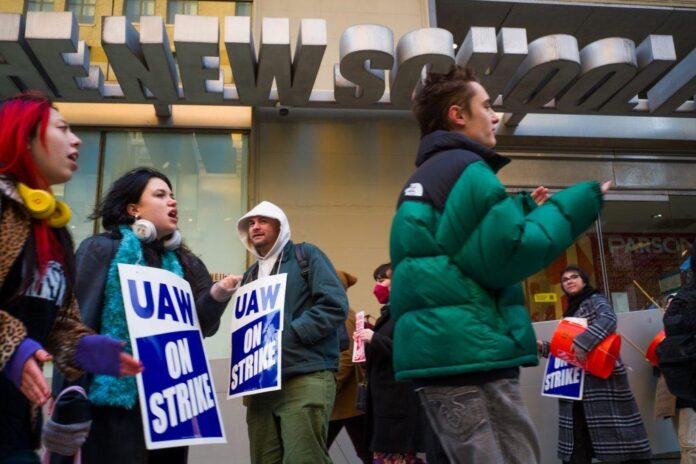 The art world’s growing labor movement has swelled to include the ranks of art professors, most recently at the New School in New York, where part-time faculty went on strike this week following the expiration of their contract. The university is home to the Parsons School of Design.

A statement announcing the planned strike citied the institution’s “intransigence at the bargaining table” and the union’s desire for “meaningful wage increases, no cuts to healthcare, and third-party protection from harassment and discrimination.”

The union approved the strike with a vote of 97 percent, with 87 percent of active adjuncts taking part—meaning that an overwhelming 1,307 of 1,678 part-time faculty members support the walkout. Those workers make up 87 percent of instructional staff, but their salaries represent no more than 8.5 percent of the school’s budget.

“Part-time faculty play a vitally important role in the New School community, and we look forward to reaching a fair and equitable agreement that works for everyone,” the university said in a statement. “We deeply respect our part-time faculty and remain committed to a renewal agreement that provides competitive compensation, exceptional benefits, and protected time off.”

It’s heartening to see so many students and full-time faculty/@AAUPTNS uniting with @UAW7902 to support our part-time colleagues — who constitute 87% of the faculty! — in their pursuit of a fair contract pic.twitter.com/ckTmxW8XOY

The school has been part of United Auto Workers Local 7902 since 2005, and last negotiated a contract in 2014. That agreement originally expired in 2019, but was extended due to the pandemic by agreement from both sides.

That means part-time faculty have not had raises in over four years. Some faculty complain of needing to work a second or third job to make ends meet.

“There is no remuneration for preparing and programming the class, grading the weekly assignments in my writing class, or for meeting with students in office hours,” Vincent Boucher, who has taught a journalism in fashion elective at Parsons for four years, told Artnet News in an email. “It’s estimated that, per course, we make about a third of what a full-time professor would make.”

The institution’s current offer is a small 3.5 percent wage increase, compared to the union’s ask of 10 percent. The New School claims that would amount to $200 million over the course of the contract, a huge chunk of its annual operating budget of $460 million.

“I don’t have a safety net,” Annie Lee Larson, a professor at Parsons School of Fashion and unit chair for the part-time faculty, who grosses $8,598 for teaching two semester-long courses a year, said in a statement. “I live alone in one of the most expensive cities in the world. If I can’t pay my rent or bills, nobody else is stepping in to help.”

“Nobody would do this for what the New School is offering in terms of pay,” Zoe Carey, president of the union chapter and a Ph.D candidate at the university, told Inside Higher Ed. “[Teaching at the New School] is really a labor of love.”

Despite the strike, the university sent an email to students noting that “classes will continue to meet and students should plan to attend,” as reported by the . The New School has drawn up a Google Doc with guidelines for students and faculty, recommending continuing to complete work on course syllabi.

Nevertheless, students as well as some full-time faculty joined the picket line outside the New School’s University Center on 14th Street.

It is so inspiring to see students picketing by our side

Part-time faculty at The New School continue our strike and contract negotiations continue with the university’s team pic.twitter.com/34gSR9cLUn

The university reports that talks at the negotiating table since the strike began have been productive, with the two sides reaching a tentative agreement on four of 16 articles.

The New School isn’t the only university in the city where part-time faculty have been agitating for better pay. Unionized adjunct faculty at New York University had voted to strike, but came to an 11th-hour contract agreement on November 1, just hours after the expiration of the previous contract. On the West Coast, 48,000 University of California workers have been on strike for nearly a week.

Art museums, too, have been slept by labor activism this year. The Museum of Fine Arts, Boston, finally approved a union contract after over a year of negotiation, including a one-day strike, while the Philadelphia Museum of Art was hit by a 19-day strike that concluded last month with a tentative contract agreement. Just this week, Brooklyn Museum staff picketed outside the star-studded opening for the blockbuster Thierry Mugler show.

At Parsons, demonstrations continued on Friday, with “a seance to resurrect the New School’s progressive values,” according to the union’s Twitter.