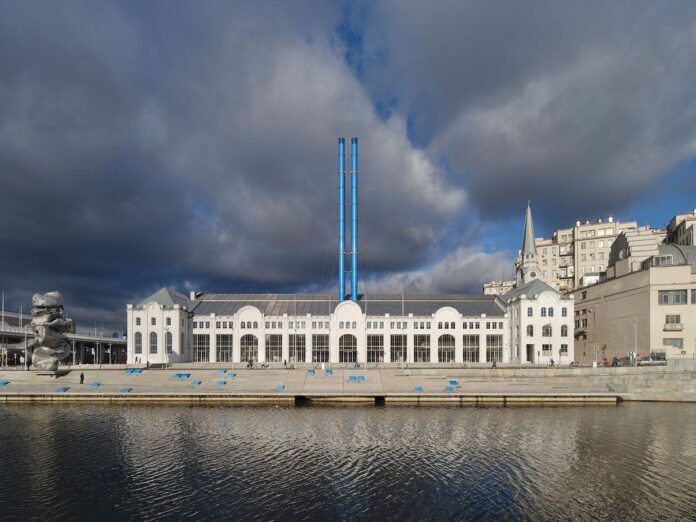 GES-2 House of Culture—a 20th-century power plant opposite the Kremlin acquired by Russian oligarch Leonid Mikhelson and redesigned as a soaring art space by Renzo Piano—opened to great fanfare in December 2021 as a symbol of a new Russia. Less than a year later, following Russia’s invasion of Ukraine in February, it has become a symbol of the cultural death knell of the country.

Teresa Iarocci Mavica, the Italian-born co-founder with Mikhelson in 2009 of V-A-C Foundation, stepped down as director of GES-2 just weeks after leading Russian President Vladimir Putin on a tour of the facilities on its opening—he even tinkled on the piano there—in footage broadcast on state TV news. Following her departure, his facial expressions during the tour were minutely examined by arts scene observers and Kremlin watchers for signs of displeasure at a foreigner running a flagship institution.

A press statement at the time (December 2021) said Mavica would continue as general director of V-A-C Zattere, the foundation’s space in Venice. After the invasion, the Venice venue was “temporarily suspended… out of respect for our audience and artists”. In May, Zattere was targeted by anti-war protestors; it has subsequently shut down indefinitely. Last month, Mavica’s name was removed as a co-founder of V-A-C on the foundation’s website. Neither she nor V-A-C responded to requests for comment on the rewriting of the organisation’s history, although Mavica says: “I completed my task by finishing the construction of GES-2 and since then have had no role in its life at any level.”

Meanwhile, Francesco Manacorda, V-A-C Foundation’s artistic director, resigned in March, citing the war as the reason. Artists and other participants in GES-2 programmes also began to accuse the venue of censorship.

Alisa Prudnikova, the commissioner of the Ural Industrial Biennial of Contemporary Art, was appointed programme director of V-A-C and GES-2 in May. Putin appeared at GES-2 again in July, presiding over a technological innovation forum whose theme was “Strong Ideas for a New Time”.

In 2019, at a press conference with Mikhelson at Tass, Russia’s state news agency, Mavica had announced a five-season programme for GES-2, beginning with Icelandic artist Ragnar Kjartansson’s Santa Barbara based on the eponymous American soap opera. Kjartansson pulled the plug on the project and his affiliation with GES-2 following the invasion of Ukraine and revealed to The New York Times that he had helped Pussy Riot’s Masha Alekhina, on the run from prosecution, to flee Russia.

GES-2 sent out a press release this September with its programme to the end of the year. There is no hint in it of any event that might mention the war. An exhibition series is showing V-A-C’s strong international contemporary art collection at GES-2 in interaction with sound installations by Russian composers.

Programming includes new commissions for the venue’s central Prospect space, which had been occupied by Kjartansson’s Santa Barbara film set, a concert series, and forays to Kostroma, a historic city northeast of Moscow, to host GES-2’s first regional festival.

“The park near the city philharmonic will become an open platform for creative interaction between citizens, artists, designers, musicians and artisans,” according to the press release on Kostroma. “Part of the scenery of the festival will be special art objects created by Kostroma craftsmen. The partners of the programme are the subsidiaries of Novatek, which participate in the cultural and social life of their regions. Programme events will also be held in Murmansk, Chelyabinsk and Kamchatka.”

Mikhelson, who is worth over $24bn according to the business magazine Forbes, is the chairman and major shareholder of the gas company Novatek. The capital cost for GES-2 is believed to be at least $300m.

Nikita Rasskazov, a curator in charge of musical programmes for V-A-C who also quit over the war, says that as the opening of the venue approached, Mikhelson became increasingly vocal about its programming. His daughter Viktoria—V-A-C is reportedly named after her­—also “broadcast a partially different vision”. She could not be reached for comment.

Rasskazov said: “Mikhelson has an opinion, which he personally voiced to us at meetings, that he seems to know what the people want, based on the fact that he travels around Russia on his gas business and when he was an engineer in the 1980s.” He added that the billionaire’s preference was for simple folk-style festivals. “He became frustrated that our projects were not always clear at a glance.”

Rasskazov said that Mavica had long been planning to leave GES-2 after overseeing its construction, and that Mikhelson’s change in behaviour “is unlikely” to have prompted that decision. Most of V-A-C’s team has remained in place, he added.

Which Beginner Artists Are Most in Demand? About What Sales of Phillips New York Can Tell To Us