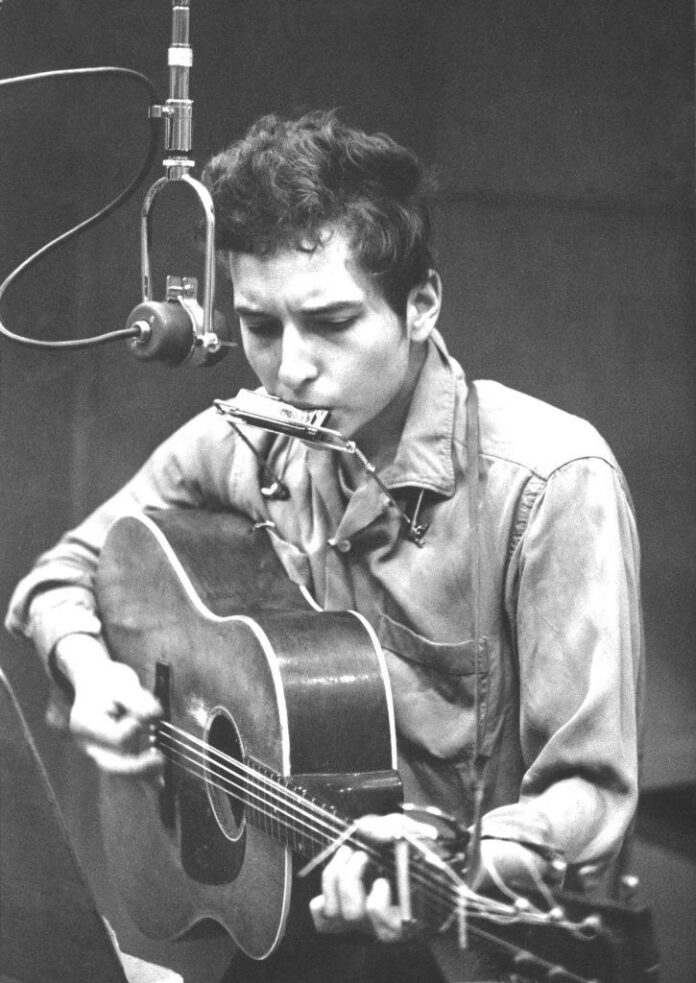 Bob Dylan just sold a new one-of-a-kind recording of his hit single “Blowin’ in the Wind” for £1.48 million ($1.77 million) at Christie’s London.

The song was recorded with producer Joseph Henry “T-Bone” Burnett, who played electric guitar and piano on Dylan’s Rolling Thunder Revue tour in the mid-1970s. Burnett has developed a new analog audio format, which he’s dubbed Ionic Originals, and the unique Dylan single is the first one ever made.

“Sixty years after Bob first wrote and recorded ‘Blowin’ In The Wind’, he is giving us a new recording of his song; one that is both deeply relevant for our times and resonant with decades of the artist’s life and experience,” Burnett said in a statement.

The project is different than the Wu Tang Clan’s infamous album, the sole copy of which sold for $2 million on Paddle 8 to Martin Shkreli in 2015. (The pharmaceutical executive was later convicted of securities fraud and the the government seized the album and sold it for $4 million to the cryptocurrency collective PleasrDAO.) 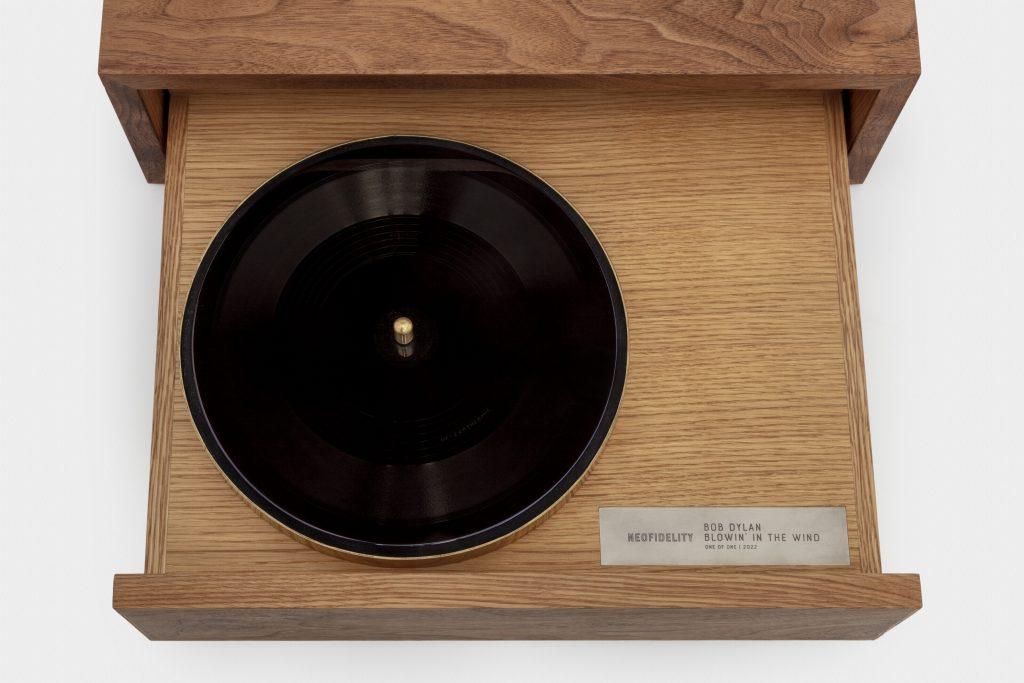 A NeoFidelity Ionic Original acetate disc of a 2021 Bob Dylan recording of “Blowin’ in the Wind” with custom walnut and white oak cabinet. Photo courtesy of Christie’s London.

“That was the beginning of artists taking control of their own work. But that was just a CD they sold, and CDs are infinitely reproducible,” Burnett told . “This is an actual one-of-one.”

And the format is far superior, he said, than the MP3s we’ve all become used to.

Ionic Originals are recorded directly onto an acetate record, which would normally be the first step in producing records, used as a test pressing. Acetate is prized for its sound, but it degrades quickly, the needle melting the lacquer that has been painted onto the aluminum disc even as the music plays. 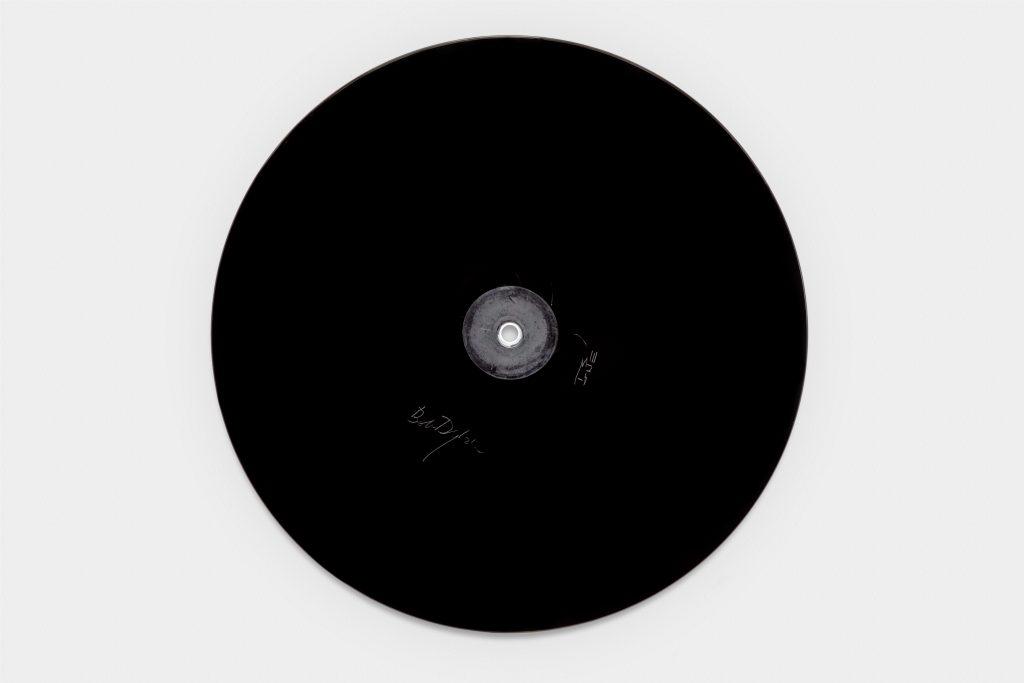 A NeoFidelity Ionic Original acetate disc of a 2021 Bob Dylan recording of “Blowin’ in the Wind.” Photo courtesy of Christie’s London.

But Ionic Originals employ a special sapphire and quartz gradient coating—the same technology that shields the International Space Station from the sun’s rays—that at once protects the physical record and improves playback, eliminating friction and providing a resonance and sonic fidelity that Burnett claims simply can’t be achieved in existing audio formats.

Burnett’s new company, NeoFidelity, Inc., aims to market Ionic Original recordings as something akin to works of art. (Fabrication is expensive, but the plan is to eventually offer limited edition runs.) 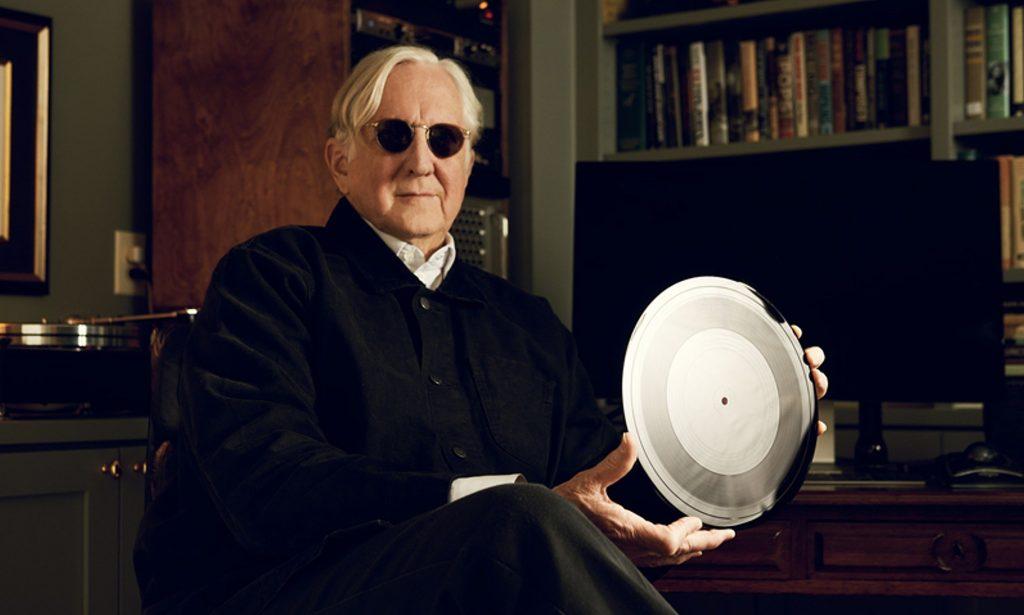 The unique recordings offer “the pinnacle of recorded sound,” Burnett said in a statement. “Not only is an Ionic Original the equivalent of a painting, it is a painting. It is lacquer painted onto an aluminum disc, with a spiral etched into it by music. This painting, however, has the additional quality of containing that music, which can be heard by putting a stylus into the spiral and spinning it.”

Adding to the record’s status as an art object, it comes in a handmade walnut and rift sawn white oak cabinet designed and fabricated by Lawrence Azerrad, LADdesign, Inc. and Thomas Greek, Firm Designs, Inc.

“Marshall McLuhan said that a medium surrounds a previous medium and turns the previous medium into an art form, as film did with novels, as television did with film, as the internet has done with television, and as digital has done with analogue,” Burnett said in a statement. “With Bob Dylan’s new version of ‘Blowin’ In The Wind,’ our first Ionic Original archival analogue disc, we have entered and aim to help develop a music space in the fine arts market.” 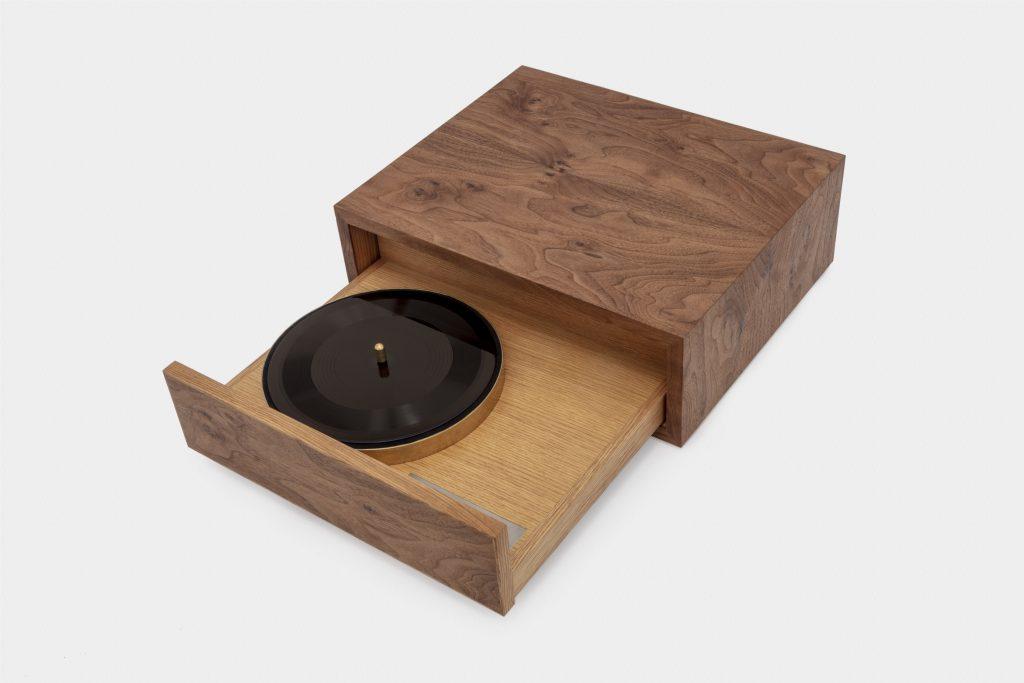 A NeoFidelity Ionic Original acetate disc of a 2021 Bob Dylan recording of “Blowin’ in the Wind” with custom walnut and white oak cabinet. Photo courtesy of Christie’s London.

Ionic Originals also have the potential to become a new revenue stream for recording artists, elevating their craft to another level.

With recording artists making just fractions of a cent when their music plays on streaming services, musicians have struggled to ensure a consistent revenue stream—especially during lockdown, when touring was impossible.

“I don’t look at this as a replacement for anything,” Burnett told the BBC. “I just look at it as another arrow in the quiver for every musician in the world [and] a whole new way of earning a living that we’ve never had before.” 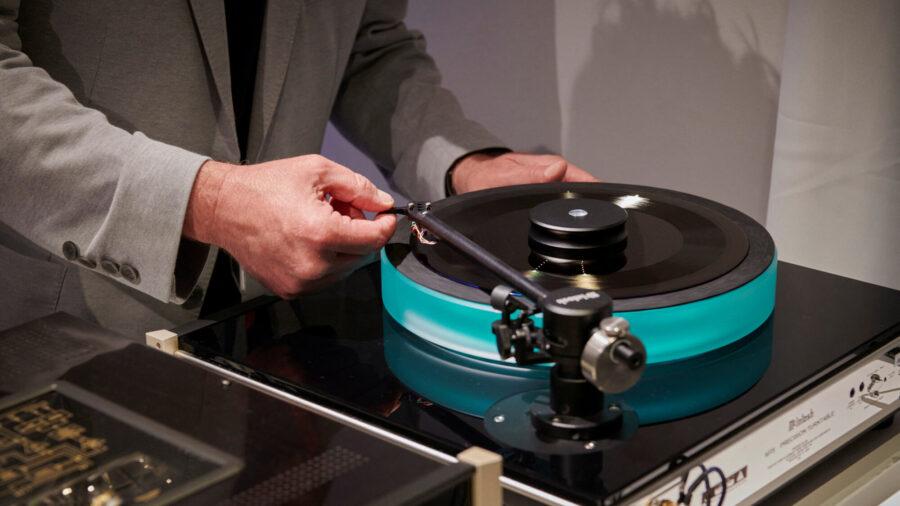 The original “Blowin’ in the Wind” released in 1963 is one of Dylan’s most enduring recordings—despite the fact that he is said to have written the song in just 10 minutes while sitting at a cafe in Greenwich Village.

The new version features a full band, and this is the only copy that will ever be manufactured or released. (Other songs from the recording session may be released in the future, but Dylan has thus far kept the day’s set list a secret.)

“He hadn’t been on the road for a couple of years when we did these recordings, so his voice was clear and strong and beautiful,” Burnett told . 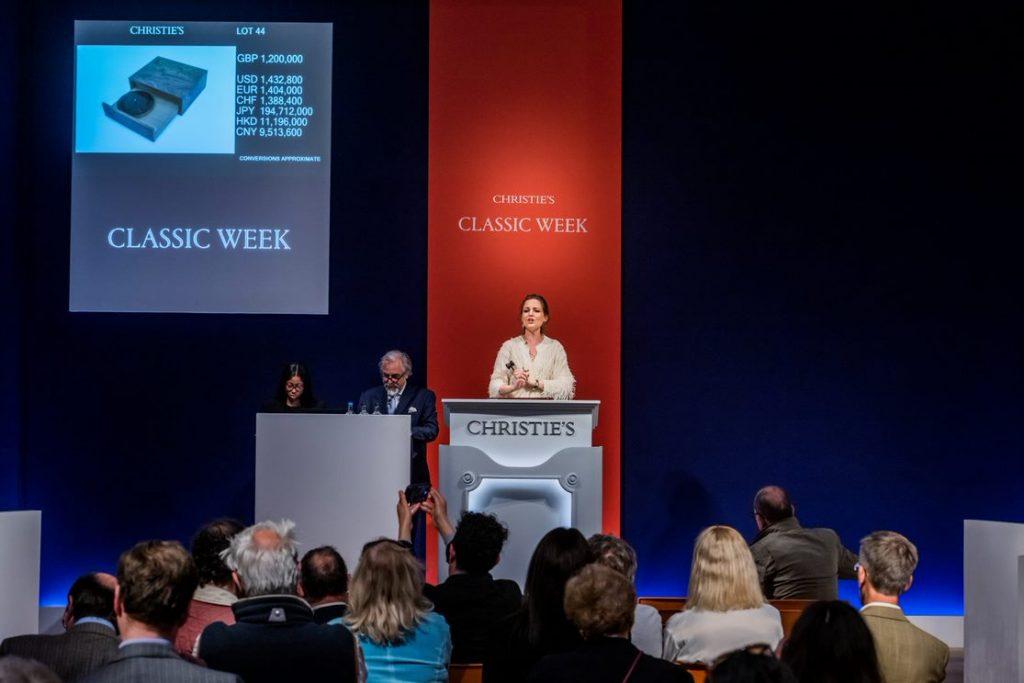 Its sale came just two days before the 60th anniversary of the original recording, which was part of Dylan’s second album, .

Burnett hopes the new owner “will consider it and care for it as a painting or any other singular work of art,” he told Christie’s.

He also expects it may one day wind up at a museum—maybe even the new Bob Dylan Center in Tulsa. But there will be strict safeguards to ensure it isn’t recorded or disseminated online.

“I think this is the best record I’ve ever made in my life, so I want everybody to hear it,” Burnett told . “But an MP3 is the sonic equivalent of a Xerox of a Polaroid of a photograph of a painting. It’s that far removed from what you actually see when you see a painting. So this piece of work we’ve done here, if people hear it, I want them to hear it the way we made it sound.” 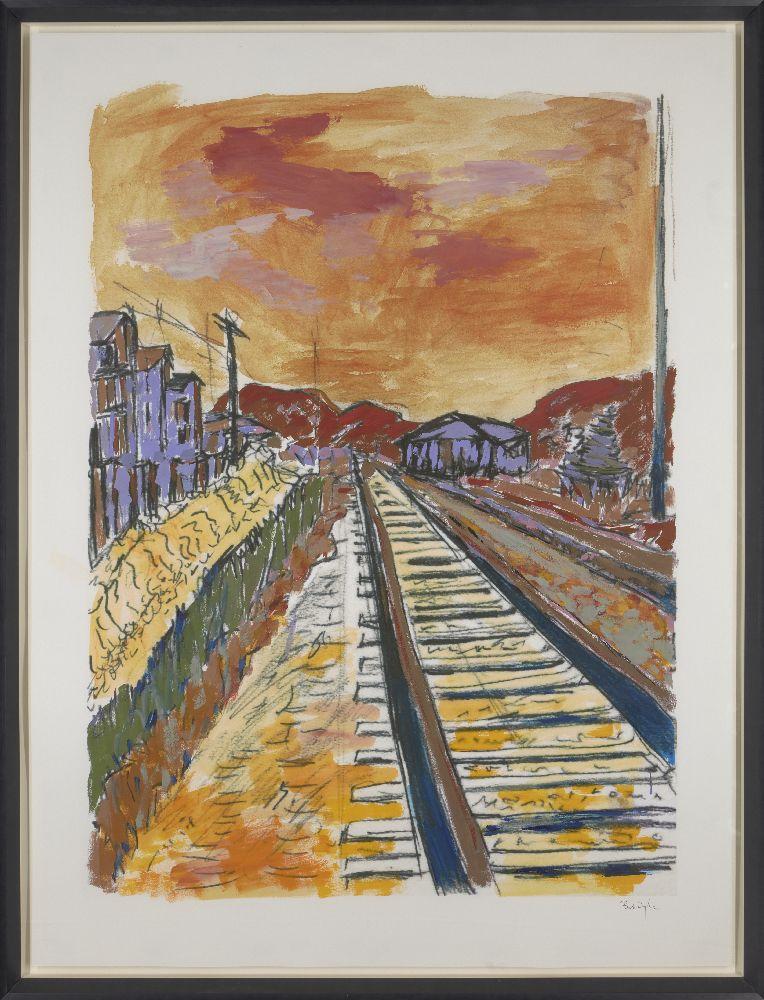 In addition to his music career, Dylan is also a prolific visual artist—but his art auction record is just £32,000 ($38,077), set earlier this week at Roseberys London, according to the Artnet Price Database.

The work, titled , dates to 1979 and is a unique giclée hand embellished by the artist. Only one Dylan oil painting has ever hit the block, back in 2014 at Christie’s South Kensington, and it failed to find a buyer—the rest of his offerings have been giclée prints.

Only a few journalists and potential bidders have been afforded the opportunity to listen to the new Dylan recording, which carried a presale estimate of £600,000–1 million ($716,000 to $1,200,000). The winner bidder, who has not been identified, prevailed in a two-way battle to take home the unique piece of musical history at Christie’s “The Exceptional Sale” during “Classic Week.”

The song was the second-biggest lot of the night, after a £6 million ($7.18 million) Egyptian limestone group statue for Mehernefer and his son (circa 2,400–2,300 B.C.E., estimate on request). The ancient artwork once belonged to King George III.