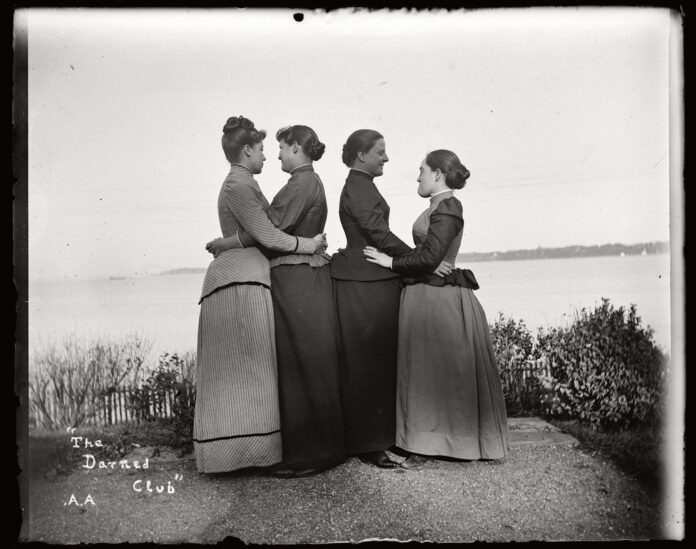 Alice Austen left her Staten Island farmhouse at 2 Hylan Boulevard in a hurry. It was 1945, and the elderly photographer was being evicted from her lifelong home after defaulting on the mortgage. Before being transferred to a poorhouse and separated from Gertrude Tate, her partner of over four decades, Austen arranged for an antiques dealer to buy some furnishings, and for the Staten Island Historical Society to take 3,500 glass plate negatives—around half of her life’s work.

Other things were left behind, though, lingering in corners and cupboards. The second-floor closet was still outfitted as the darkroom where she developed and printed her street photography of women and immigrant communities in New York. A cupboard in the attic held hundreds of letters, neatly folded back into their original envelopes. “My precious” began the ones penned by Austen’s mother, while Auntie Min addressed her as “Ping” and friends as “My dear Alice”.

From treasure trove to museum

The Mandia family soon moved into the house and their children found the letters. They used them to play mailman and doodled on some, but also safeguarded the letters for 40 years, eventually bringing them back when the Dutch colonial farmhouse became the Alice Austen House Museum—a New York City and national landmark, and a national site of LGBTQ history. (The Mandias were not alone in returning things to the house; when it was restored in the 1980s there was an outpouring of donations from community members who had bought and kept Austen’s belongings, including negatives. The museum is still receiving things.)

While Austen’s photographs have been studied since her death in 1952, her trove of letters dating between 1883 and 1898 (when she was aged 17 to 32, creating the photographs for which she is now best known) has remained relatively untouched. “Alice is super under-researched,” says Victoria Munro, the director of the Alice Austen House Museum, who worked with scholar Pamela Bannos to explore this correspondence. A podcast called My Dear Alice, released this autumn, is the result of their collaboration and narrates a selection of letters along with newly researched background information. “The letter collection reveals so much about her social interactions,” Munro says, “and also her professional ambitions, photographically.”

The Covid-19 pandemic gave the museum a period of pause to focus on its collection, and Bannos, a Northwestern University professor who wrote the first biography of the photographer Vivian Maier, spent much of the past two years transcribing and studying these missives from home. “We never hear Alice Austen’s voice,” Bannos says, as the letters are all to the photographer. “But we learn about her and the culture of the times through the correspondents, who are mostly women.”

The podcast focuses on six characters, including a curmudgeonly man named Henry Gilman who courted Austen, her childhood friend Julia Martin, and Daisy Elliott—a gymnast and possible love interest who wrote Austen romantic letters while biking across the Swiss Alps.

“Her circle of friends was really phenomenal,” Munro says. “They were women involved with inventions and patents, and it’s really a different picture of what is often presented as the norm for Victorian women. It’s been important to study these letters to understand more about these relationships, and also more about what was happening potentially within Alice’s love life before she met her life partner, Gertrude Tate.” As the museum does not contain much oral history, Munro envisions this podcast as an accessible and entertraining type of primary resource.

The envelopes that protected these letters are also part of the podcast. Since they were postmarked both at the originating post office and on arrival at the local Staten Island branch, Bannos could match the dates of Austen’s biography with when these letters were delivered to her mailbox. Bannos gathered, for instance, that Austen was away in the Catskills meeting Tate for the first time when Elliott’s last six emotional letters were piling up at home.

“I’m trying to tell her story through the voices of the people who are talking to her, in these letters that have wound up back at the place where they sent them,” Bannos says. “And reconstructing this narrative where we learn things about her that nobody has ever accessed before. There’s a lot of evidence left to unbury, to tell the stories that have not been told before.”