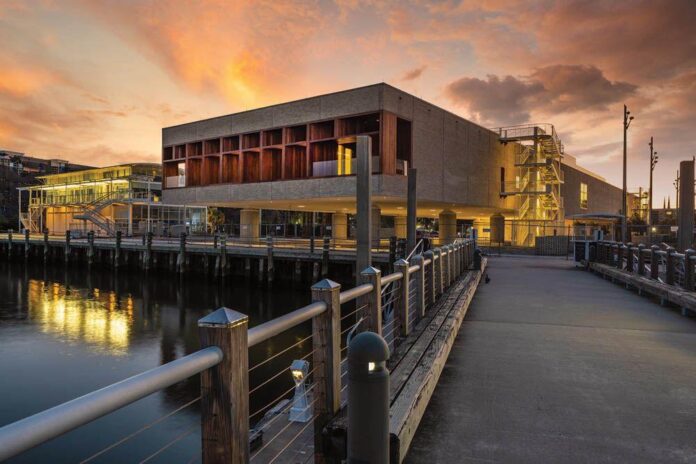 Gadsden’s Wharf, in Charleston, South Carolina, was once the largest slave port in the United States. More than 40% of all enslaved Africans first stepped foot in the US through the dock; more than 100,000 people during the peak of the international trade.

Today, the new International African American Museum (IAAM) is being constructed in full view of the historic dock, just across the waterfront. The museum, which is scheduled to open on 21 January 2023, will provide a comprehensive overview of the cultural, socio-economic and psychological history of slavery, and the ways it continues to impact today.

“Gadsden’s Wharf was one of the most prolific slave trading ports to have ever existed,” says Tonya Matthews, the president and chief executive of the museum, in an interview. “What a museum like this can bring is context—an understanding of the historical context of racism,” Matthews says. “Charleston, in particular, is the right place to have these conversations; it’s a place where African Americans pushed forward—but also where we were pushed back.”

The $125m museum will span 150,000 sq. ft and has been designed by the late American architect Henry Cobb. It stands on a series of 13ft-tall pillars, which dramatically lift the structure above a memorial garden designed by the California-based landscape architect Walter Hood. An ethnobotanical garden is being planted next to the new museum with plants chosen because of their origins in West Africa, South Carolina and the Caribbean islands.

The IAAM includes nine galleries; eight permanent and one temporary. Each can be used as exhibition space for rotating displays, which will range from historic to contemporary works. The inaugural curatorial programming is being overseen by the interim chief curator, James Bartlett, who was previously the executive director of the Museum of Contemporary Diasporan Arts in Brooklyn, New York.

The museum’s temporary gallery will open with an exhibition organised in partnership with the University of North Carolina at Chapel Hill and the Ackland Art Museum, and will feature historic and contemporary Black artists from the south-east. A second show will deal with themes related to what is now referred to as the Great Migration—the movement of around six million Black people from the South to northern, midwestern and western states between the 1910s and 1970s.

But this new museum is not just a simple exhibition space, for it will include a pioneering genealogy research library that will help African American visitors trace their ancestry and discover whether their forebears made the fated journey through Gadsden’s Wharf. The library is partly available online, and includes guidance on how researchers can track down birth and death certificates and find information on DNA testing. The library also houses an extensive collection of related records such as documents relating to Civil War service. “The library is one of the most important parts of the project,” Matthews says. “Where do we come from? How did we get here, and what does it mean?”

Charleston is predominantly white, with a Black population of around 22%. Racial tensions still run high, nearly 200 years after slavery was abolished. The state is disproportionately responsible for the death of Black people while in police custody; between 2013 and 2022, 45 Black people died as a result of interactions with the police in South Carolina. In one of the most high-profile incidents, in 2017, the white police officer Michael Slager was convicted of murdering Walter L. Scott, whom he shot eight times in the back as Scott fled. In 2015, the same year Scott was killed, the white supremacist Dylann Roof murdered nine Black people during a church service at the city’s Emanuel African Methodist Episcopal Church.

In recent years, city officials have grappled with whether to remove Confederate statues from public view, despite the state’s Heritage Act, a controversial statute enacted in 2000 that protects historic monuments and memorials. City officials have continuously challenged the act; at the height of the Black Lives Matter protests in 2020, a towering statue of John C. Calhoun, the seventh US vice-president who staunchly opposed abolitionism, was heavily vandalised and eventually removed. Several monuments dedicated to the Confederate general Robert E. Lee have also been removed.

“I believe that a museum like this would be important at any time or anywhere, but clearly our country—if not the entire world—has been having some critical conversations about racial equity, racial inequity and social justice,” Matthews says.

“Charleston was one of the richest cities in the colonies directly because of the ingenuity that the Africans brought with them with things like rice production; this helped form the wealth of a nation,” Matthews says. “Then there’s the involvement of newly freed slaves in Reconstruction and the Civil Rights Movement. We can now tell a story we have been part of for quite some time.”

The museum has been in development for more than two decades. “It began with a proposal by the former mayor Joseph P. Riley Junior in 2000 and followed a strategic decision to have three-quarters of the funding for the capital project secured prior to breaking ground in 2019,” Matthews says. “The mission of the project was to build a museum that could be a connector to the African diaspora and the cultures we aim to preserve, and a place to celebrate the achievements of the descendants of enslaved people.”

“Charleston has been at the centre of these hard conversations since the founding of our nation,” Matthews says. “A museum that incorporates art into that conversation gives us another way of telling this story.”