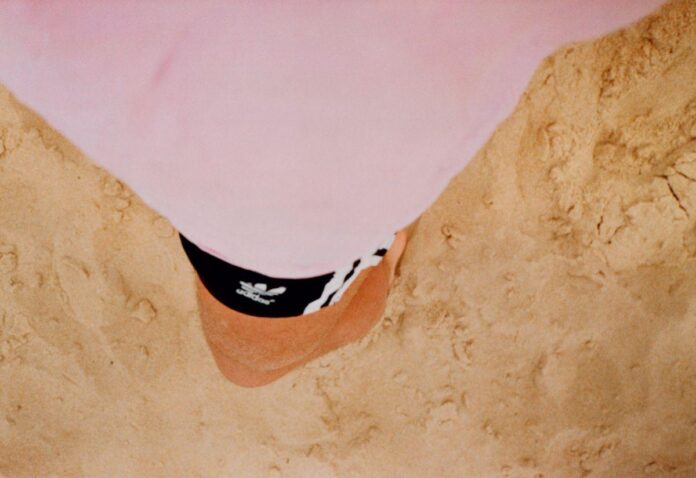 How many meanings can an expression hold? The German artist Wolfgang Tillmans’s survey at the Museum of Modern Art (MoMA), To Look Without Fear (until 1 January 2023), proves that there are many. A familiarity with Tillmans’s club culture-infused queer lens—in which limbs, sweat and desire coalesce with neon disco lights—will easily read the title as a celebration of free love, which is righteously true. A gaze unburdened by dismay, however, applies to multiple experiences throughout the show, which marks the artist’s largest US exhibition to date.

On technical level, for Tillmans, the abandonment of a fear lies in an emancipation from the photographic medium’s material concerns. The 11-room installation grandly celebrates the artist’s nonhierarchical production methods—tiny inkjet prints are attached with binder clips or pasted onto the soaring walls of the sixth floor galleries of the museum, not to mention their presence on the institution’s emergency exit doors.

Art spills onto the non-gallery spaces. Scale is also freed from echelons. A massive image of a humble starry night titled Sternenhimmel (Starry Sky) (1995) is affixed with binder clips next to teeny taped prints of portraits; another giant photograph of a mother releasing milk titled Milkspritz (1992) is hung well above eye level.

The concept of “looking without fear” was also experienced by the show’s organiser, Roxana Marcoci, MoMA’s senior curator of photography, who embraced an idiosyncratic approach in her arrangement of this much-anticipated September show. Against the show’s countless images laden with potential anecdotes and biographic details, she eschews wordy wall texts or even labels. Marcoci is unafraid, with her juxtapositions, of disrupting the institutional codes of a conventional career survey. The walls instead hold a punchy rhythm akin to the dance beats that are the invisible backdrops to many of Tillmans’s images: massive shrinks down to tiny; shocking flips to quaint, all immediately but also gently orchestrated.

Words do not interrupt the pictures—two boys kiss in the work The Cock (Kiss) (2002), or massive waves of chrome-hued liquid wash the paper surface in Freischwimmer 230 (Free Swimmer 230 (2012). The former was shot at a London gay club and the latter, created a decade later with dark room chemicals through Tillmans’s alchemy. The former’s corporeality is indisputable while the latter is not less wet, equally sweaty, even orgasmic—so much so that Tillmans had initially created his abstract chemical photo series for the dance club at Berlin’s notorious club Berghain. The museum walls came later.

Eventually, ways of seeing unrestrained by fear find us, the viewer. We look at photography with new eyes; gaze at strangers’ intimacies in the barest ways. We feel the young man’s pulling of a splinter from his foot, Anders pulling splinter from his foot (2004), on our own sole; a man’s braving of the waves in Argonaut (2017) makes us shiver, too.

The brazenness of art on exit doors makes us smile. The tapes holding the pictures bleed into the surface. Some even sway when the door is pushed. The pictures seem to breath, move and even dance. The images seep into our minds’ eye like the water, sweat and tears that Tillmans always loves to show us—in our most naked encounter with photography, we change too. Facing the essence of capturing moments in his photographs, we remember why pictures exist and our eyes are cleansed from saturated downpour of snaps on screens and off. We choose to stop in front of a picture, linger even for another second and soak it in as we look without fear.