Home News Pissarro’s painting, taken by the Nazis 77 years ago, will be returned... 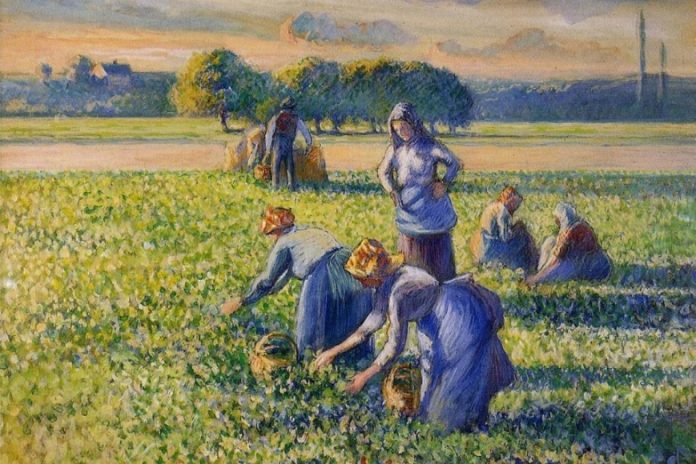 The Supreme Court of France rejected the American couple lawsuit, which demanded to recognize their rights to the painting by Impressionist Camille Pissarro. Scene “Pea Gathering” was bought at an auction, but it turned out that it was forcibly confiscated during the Second World War from a collector of Jewish origin.

The final verdict puts a three-year trial on the line. This means that around 20 descendants of the entrepreneur Simon Bauer finally obtained ownership of the canvas 77 years after its confiscation. Throughout the hearing, the painting was kept in the Orsay Museum in Paris.

Collectors Bruce and Robbie Toll bought a painting of ′′Pea Gathering′′ at Christie’s auction in New York in 1995 for 800 thousand dollars. They insist that at the time did not know that it was appropriated by the Nazis. However, the Court of Cassation rejected their appeal and left in force the decision of previous courts that the painting should be returned to the family of the Jewish collector. The court ruled that even if the Toll had acquired the painting in good faith, “they could not claim to have become legitimate owners.

American lawyer Ron Soffer said they plan to hold the French state accountable before the European Court of Human Rights. The Tolls are dissatisfied because “in the end, they were the ones who had to pay for the crimes committed by the Vichy regime,” the lawyer said. And he added that the decision “opens a Pandora’s Box to the courts”.

Supporters of the Vichy regime – the anti-Semitic government of France, which collaborated with the Nazis – in 1943 confiscated 93 paintings from the Bauer collection. The businessman himself died in 1947, two years after the end of World War II. He was held in the notorious Drancy concentration camp near Paris, where tens of thousands of Jews were taken to the Nazi death camps. Bauer himself had passed this fate.

After the war, he managed to regain several paintings, but the work “Pea Gathering”, which Pissarro painted in 1887, was lost. Bauer’s heirs started a trial after seeing it in the exhibition catalog at the Marmottan Museum – Monet in Paris in 2017. The canvas was borrowed from the Toll for a retrospective of the artist’s work.

This trial set a precedent for other legal disputes over works of art confiscated by the Nazis from Jewish owners and subsequently sold to unsuspecting new collectors.

Bauer’s heirs have not yet decided what to do with “Pea Gathering”.