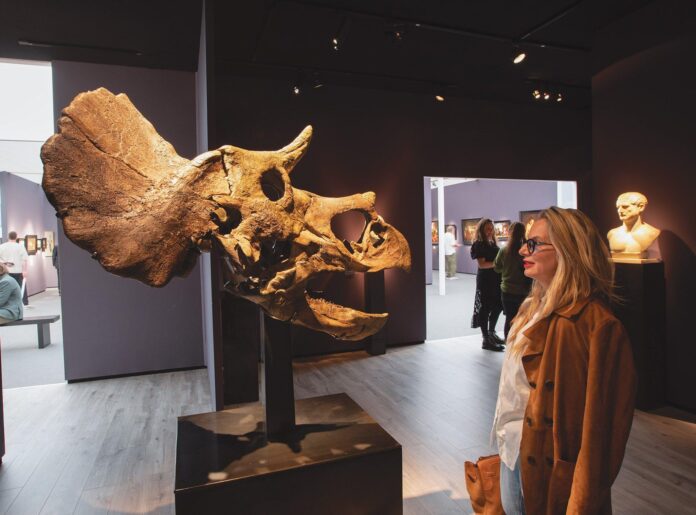 They might not be the most expensive objects at Frieze Masters, but two dinosaur fossils at the stand of David Aaron gallery are certainly vying to be the oldest. The London gallery is showing a complete skeleton of a 154 million-year-old Camptosaurus (Latin for “flexible lizard”), which sold on day one for £1m to a private collector, and the skull of a juvenile Triceratops, which has been reserved “for a price lower than £1m”, the gallery’s director Salomon Aaron says. “We’ve been acquiring dinosaurs for at least a decade, and publicly displaying them for a few years. Most collectors of fossils and similar natural history objects tend to skew towards the very young and primarily collect contemporary art.”

This demographic fact is echoed by Jethro Sverdloff, director of London gallery ArtAncient, which was the first to bring a fossilised skeleton to Frieze Masters back in 2019; it sold a 50 million-year-old crocodile for £1.2m to a young European collector. This year, the gallery brought a collection of meteorites to the fair.

The “market really took off around eight years ago”, Sverdloff says. Dinosaurs are still an uncommon sight at art fairs; they are more usually found at public auction. While the 1997 sale of the Tyrannosaurus rex, “Sue”, at Sotheby’s for $8.3m is considered a watershed moment, it was not until “Stan” the T-rex sold for $30.8m in a 2020 Christie’s evening sale that the category truly entered the consciousness of the art world. Next month, Christie’s will offer the first T-Rex in Asia, for $15m-$25m at auction in Hong Kong.

But what determines whether a fossil is sold at auction or at a commercial gallery? Many of these objects at auction have not been sold since being excavated, and so could be compared to the primary market for art.

“The auctions can achieve fantastic prices,” Sverdloff says. “Conversely—and similarly to art—private dealers can provide curated shows that auction houses, with their non-stop calendars, are usually unable to. Also, bringing something to Frieze Masters means that it has undergone a stringent vetting process that all works shown at the fair are subject to. That is reassuring to buyers.”

The excavation process between discovery and having it in the condition to be placed on a stand can take anywhere from several months to several years. This process is “fraught with financial risks for the excavators, who must work intensely with a team of conservators and preppers, usually at their own expense, to unearth these objects”, Aaron explains. And if, once they have done so, the work is not of good quality, or breaks in the excavation process, they will struggle to find a good price for it. “In this way, it is not unlike an artist in their studio. There is no guarantee something will sell; there is always uncertainty.”

Dimitrios Pandermalis, director and curator of the Acropolis Museum in Athens, has died, aged 82