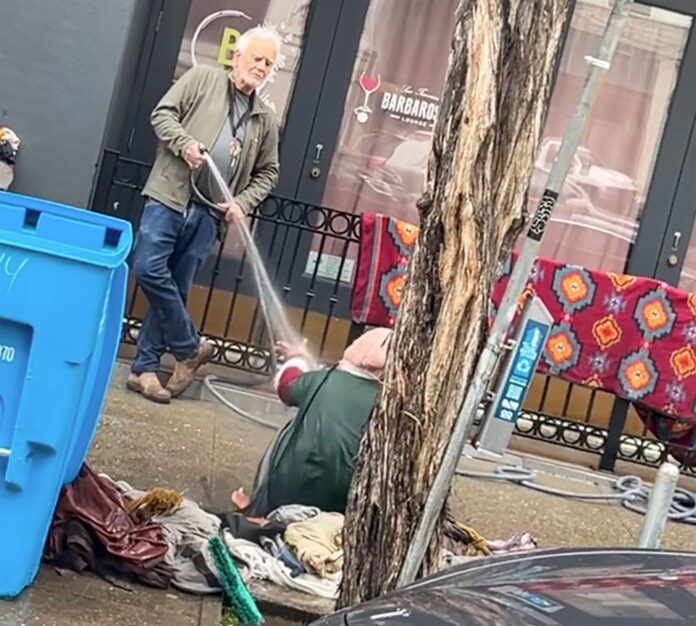 Shannon Collier Gwin, the owner of San Francisco gallery Foster Gwin, has been arrested and charged with battery following widespread outcry in response to a video in which he is seen spraying an unhoused woman sitting on the sidewalk outside his gallery with a hose.

After the viral video sparked outrage online earlier this month, Gwin made a public apology, though by then the San Francisco Police Department (SFPD) had already begun an investigation. On Wednesday afternoon (18 January), Gwin was arrested in the city’s Financial District at or near his gallery, taken to the San Francisco County Jail and charged with battery.

“The alleged battery of an unhoused member of our community is completely unacceptable,” Brooke Jenkins, the San Francisco District Attorney, said in a statement. “Mr. Gwin will face appropriate consequences for his actions. Likewise, the vandalism at Foster Gwin gallery is also completely unacceptable and must stop—two wrongs do not make a right.”

Foster Gwin gallery has been targeted by vandals after the video was widely shared, fueling anger and outrage. The gallery’s glass door has been smashed and the neighbouring bar Barbarossa Lounge, which can be seen in the background of the video, has also received a slew of negative reviews online due to its seeming connection to Gwin’s actions. In a statement posted online, the bar’s owners said their establishment “is in no way associated with the inhumane actions portrayed in the video” and that they “in no way support such actions”.

Members of the SFPD and the San Francisco Street Crisis Response Team responded to the original incident on 9 January, when Gwin and the unhoused woman known as Q were involved in a dispute. Both refused further police assistance at that time. In subsequent public comments, Gwin initially defended his actions. “I find it hard to apologise when we’ve had no help with the situation,” he told local news station ABC7. “We called the police. There must be at least 25 calls to police. It’s two days in a homeless shelter, it’s two days in jail, and then they drop them right back on the street.”

In a subsequent video statement, he said, “I’m deeply apologetic and abhorred when I watch that video. I completely broke. I’m not equipped or trained to deal with a long-term citywide problem like this. I know it’s very hard to watch. I can only ask others to maybe try to better understand my breaking point by looking at sudden reactions they might have had in their own life and how they may have strongly overreacted and now feel so humbled and sorry.”

The video has struck a chord not only for how grimly it seems to illustrate the extreme inequalities communities in San Francisco face, but also the pervasive housing crisis that has gripped the city—and the entire state—for years. Homelessness in the Bay Area and California in general has steadily worsened since the onset of the pandemic, which has exacerbated longstanding cost of living and housing crises. Some 7,800 citizens of San Francisco are unhoused, with more than 37,000 living without housing in the entire Bay Area.