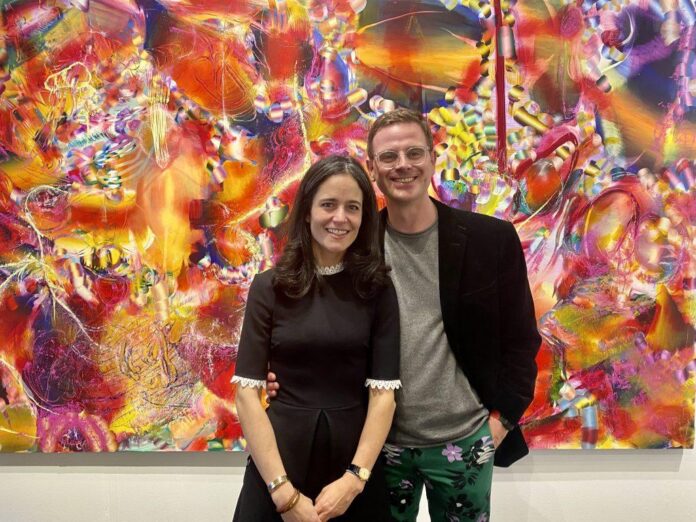 If you want an expertly guided crash course in the San Francisco art scene, look no further than Florie Hutchinson, a mother of four and arts publicist extraordinaire with her finger firmly on the pulse of Bay Area arts and culture.

A passionate advocate for artists and feminist causes—she conceived of and successfully campaigned for the adoption of an official emoji of a women’s ballet flat—Hutchinson has a keen eye for data and numbers, which she believes makes a strong case for San Francisco as a major art market capital.

”A lot of people don’t realize that San Francisco has under a million people. The population is 815,000. But our GDP—I was looking this up today—is $577 billion,” Hutchinson told Artnet News. “That’s a lot of punching power on a per capita basis. So there’s no question that the disposable income is here, there’s no question that the intellectual capital is here, and where there’s intellectual capital, there’s curiosity, and curiosity and contemporary art are natural bedfellows!”

When I touched down at the San Francisco airport the afternoon of the first day of FOG Design and Art, the city’s pre-eminent art fair, Hutchinson was there to pick me up in her Tesla Model X, with a full day’s itinerary of art activities to squeeze into the few hours before we were due at the opening gala. 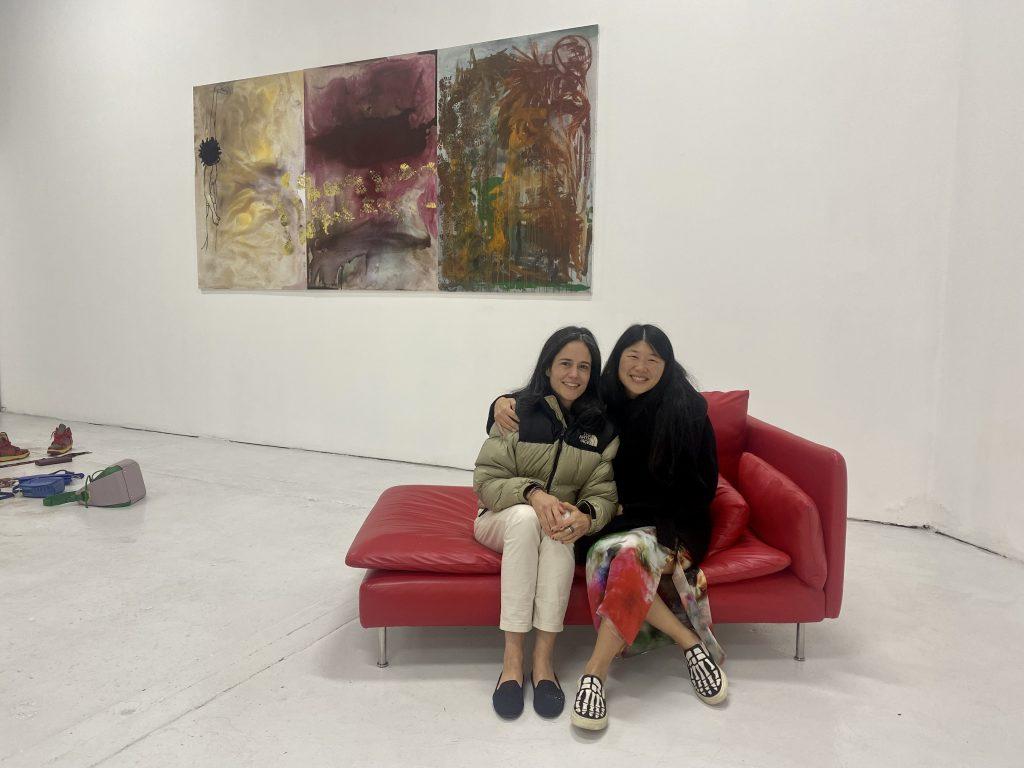 Hutchinson has lived in Palo Alto down on the San Francisco peninsula since 2014, when her husband, Ben Hutchinson, founded a financial tech startup. At the time, their daughters were two and five months years old. Two more girls have since joined the brood, and the family has purchased and renovated a historic, beautifully appointed Joseph Eichler home that has been featured in the , , and .

Prior to settling on the West Coast, the couple had previously lived in London (he is British), where Hutchinson (Swiss-American) had spent three years running an agency with Carrie Rees (who now runs the London arts communications firm Rees and Co).

But while Hutchinson had a built-in group of close college friends who lived on the peninsula, she had to build out her professional network in her new home from scratch. 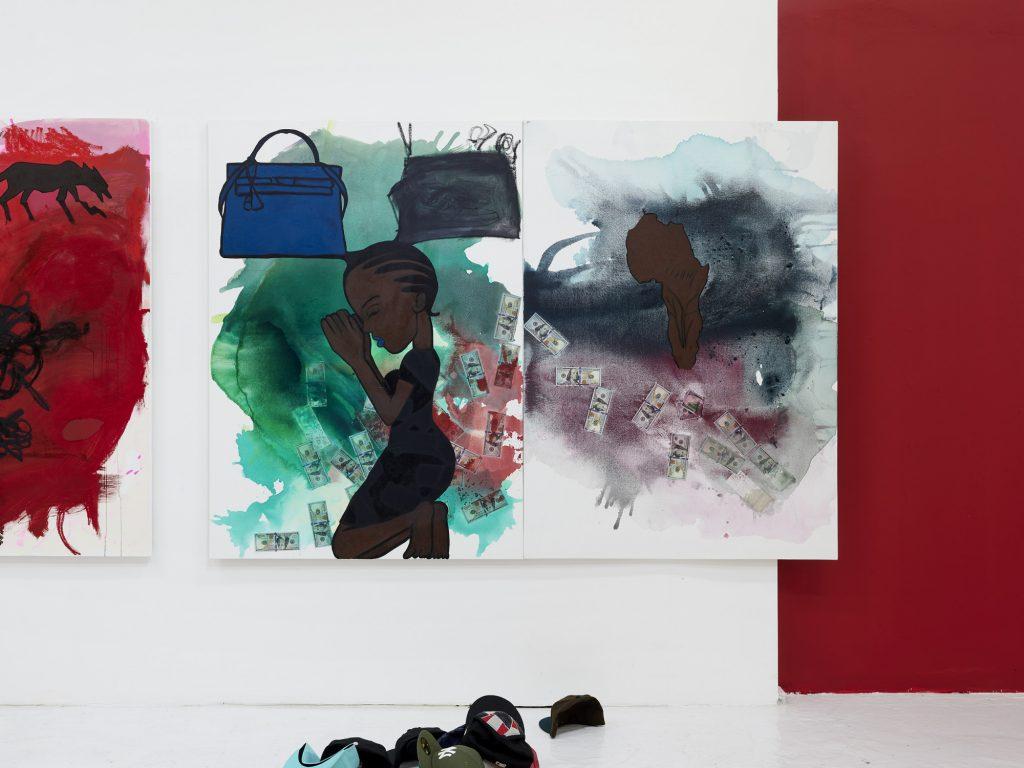 Our first stop of the day, coincidentally, was with the first contact she made, curator Micki Meng. They met when Hutchinson went to visit the Wattis Institute at the California College of the Arts in the hopes of buying a limited edition work, and, when she couldn’t find anyone at the front desk, poked her head into the back room.

“I introduced myself to Micki, and that conversation turned into three hours, and immediate friendship!” Hutchinson recalled.

Meng was waiting for us with sandwiches and dill-flavored potato chips in the Bayview location of her gallery, which she opened in Chinatown in 2019. The second space, housed in an old woodworking studio, is currently showing a selection of new diptychs by Los Angeles artist Omari Douglin, inspired by his native city of New York. 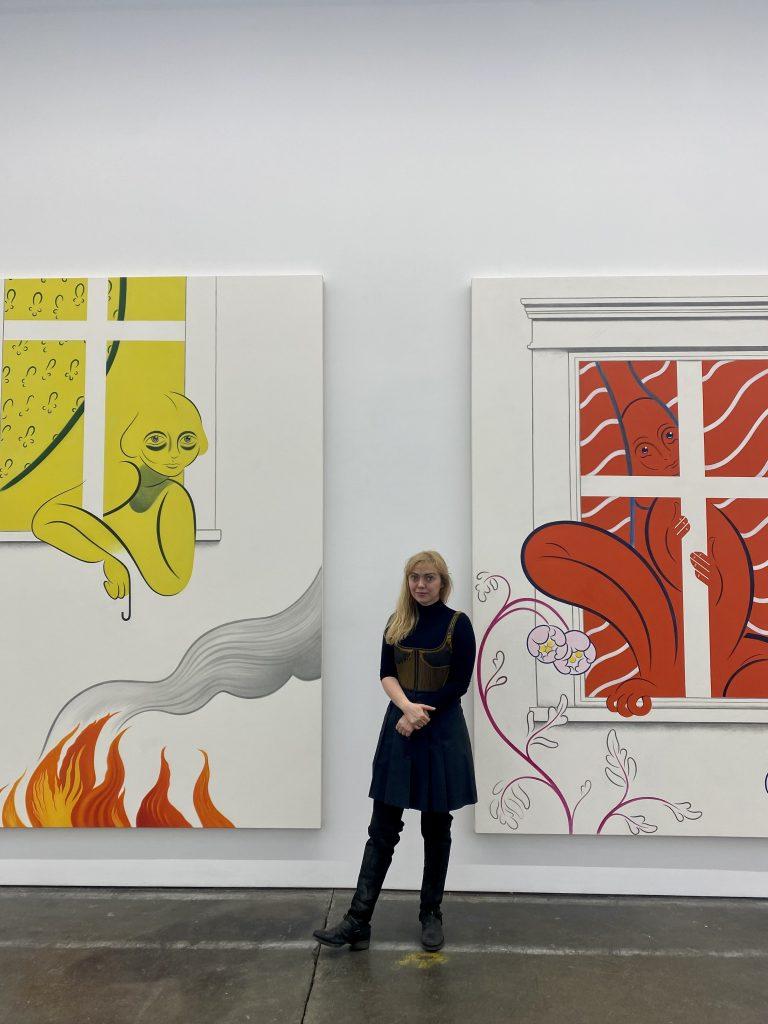 Koak with two of her paintings at her solo show at Altman Siegel in San Francisco. Photo by Sarah Cascone.

Then it was off to Altman Siegel, one of 15 galleries at the Minnesota Street Project. (Owner Claudia Altman-Siegel was another early Bay Area connection—the two bonded over both having young children when the dealer spotted some spit-up on Hutchinson’s shoulder at a gallery opening at Jessica Silverman.)

The gallery had just opened a pair of exhibitions, including one of cartoon-like paintings and vaguely Seussian sculptures by local artist Koak. She was there to give us a tour of the show, which she described as being about “stress, anxiety, and human disaster.”

The other show was the gallery’s first time working with the estate of Beth Van Hoesen, who was born in Boise, Idaho, in 1926, but spent much of her life living in a former firehouse in San Francisco’s Castro District. 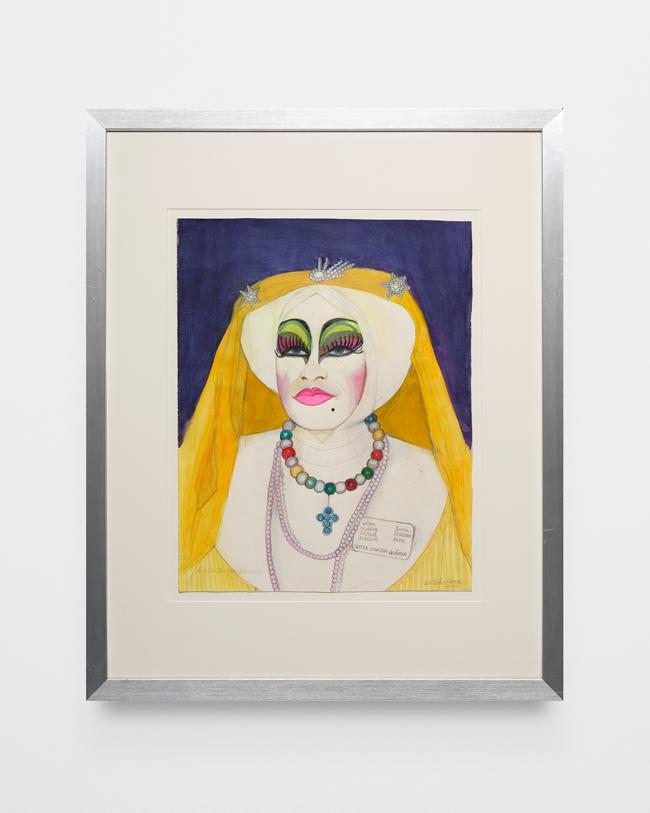 The gallery is donating a portion of the sales of her delicate drawings of her friends and neighbors, which form a poignant portrait of the Castor’s queer community in the 1980s, to the Rainbow Honor Walk, a nonprofit that celebrates LGTBQ history with bronze sidewalk plaques throughout the neighborhood.

Next door to Altman-Siegel was the McEvoy Foundation for the Arts, a space dedicated to the private collection of Nion McEvoy and his family.

“He’s a beloved figure in the Bay Area. That generation cares deeply about keeping the arts ecosystem here alive and thriving,” Hutchinson said as we took in the current group show “Color Code.” Curated in celebration of the foundation’s fifth anniversary, it featured new commissions by Bay Area artists Sadie Barnette, Angela Hennessy, Clare Rojas, and Zio Ziegler, as well as other selections from the collection. 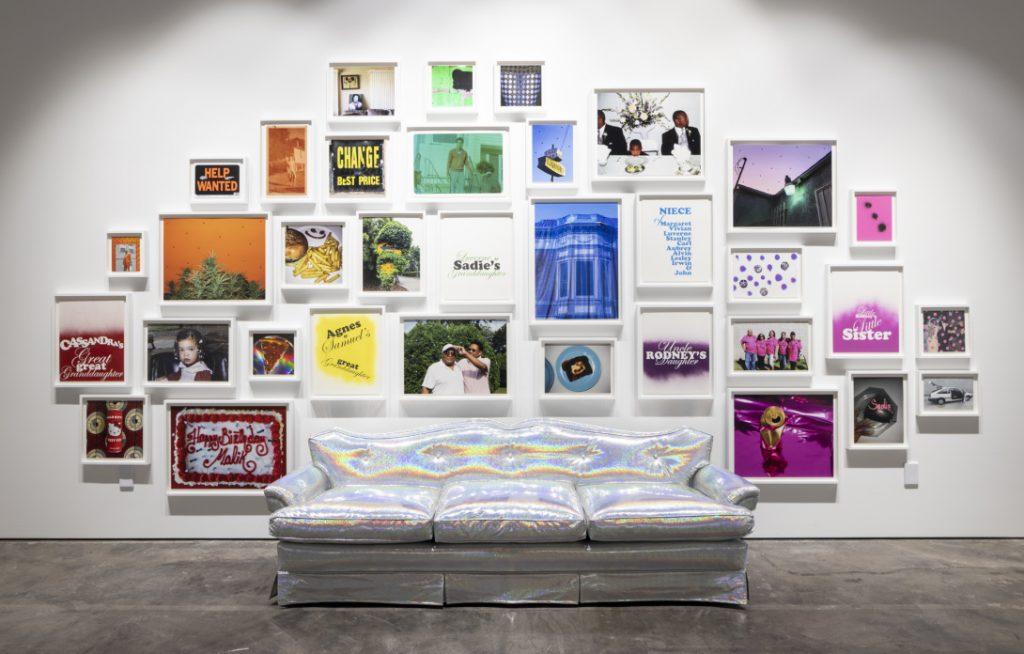 As the day continued, it became clear that Hutchinson is a never-ending fount of knowledge about who’s who in the Bay Area, and what connects them. We didn’t have time to pop in the Minnesota Street Project’s main gallery campus, but as we drove by, I mentioned that I had loved one of the shows I had seen on my last visit to the Bay—Gay Block’s “Rescuers: Portraits of Moral Courage in the Holocaust” at Jack Fischer Gallery.

The show was spearheaded and funded, Hutchinson informed me, by Pamela Hornik, a Palo Alto art collector and arts philanthropist. Hornik had seen some of the photos, taken in the late ’80s, and was captivated by the story they told, of ordinary men and women across Europe who risked everything to hide Jews from the Nazis.

Later at the gala, Hutchinson would introduce me to Hornik, who is such a booster of the local art scene that she literally volunteers to greet visitors at the front desk of the Cantor Arts Center at Stanford University, where she is a board member.

“It’s my favorite thing to do,” Hornik told me. 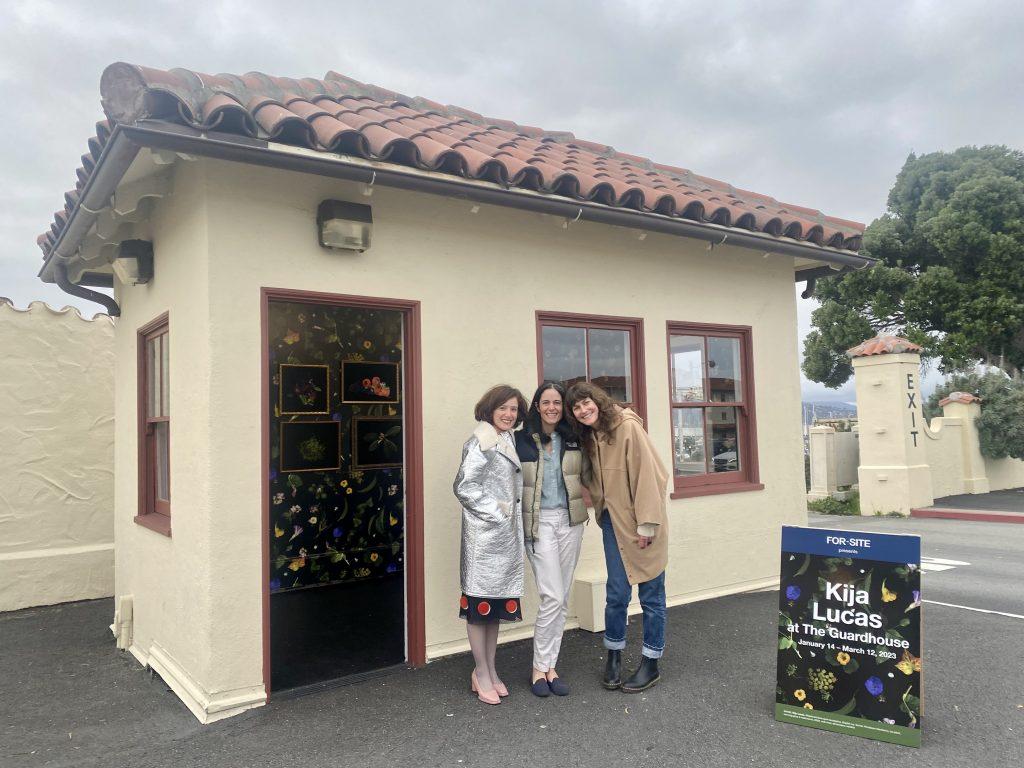 Artist Sarah Meyohas was walking by and I enlisted her to join this photo with Florie Hutchinson and Lisa Ellsworth outside “Kija Lucas at the Guardhouse.” Photo by Sarah Cascone.

But before we got to the fair, we stopped first at the entrance of the venue, the Fort Mason Center for Arts and Culture, to check out the Guardhouse. The tiny, 100-square-foot building dates to 1926, not long after the site, now administered by the National Park Service, opened as an army base.

This week marked the opening of the first in a new series of artist takeovers of the diminutive space, responding to the site’s natural and cultural history, organized by the FOR-SITE Foundation, an art nonprofit founded by San Francisco art dealer Cheryl Haines in 2003.

Local artist Kija Lucas had covered the walls with a gorgeous botanical wallpaper featuring plants like fennel and English ivy—familiar to any Bay Area resident, but actually invasive.

“These plants suggest home for a lot of us, but they have complicated histories,” curator Lisa Ellsworth told us during a tour of the show, which can only be seen through the Guardhouse windows. 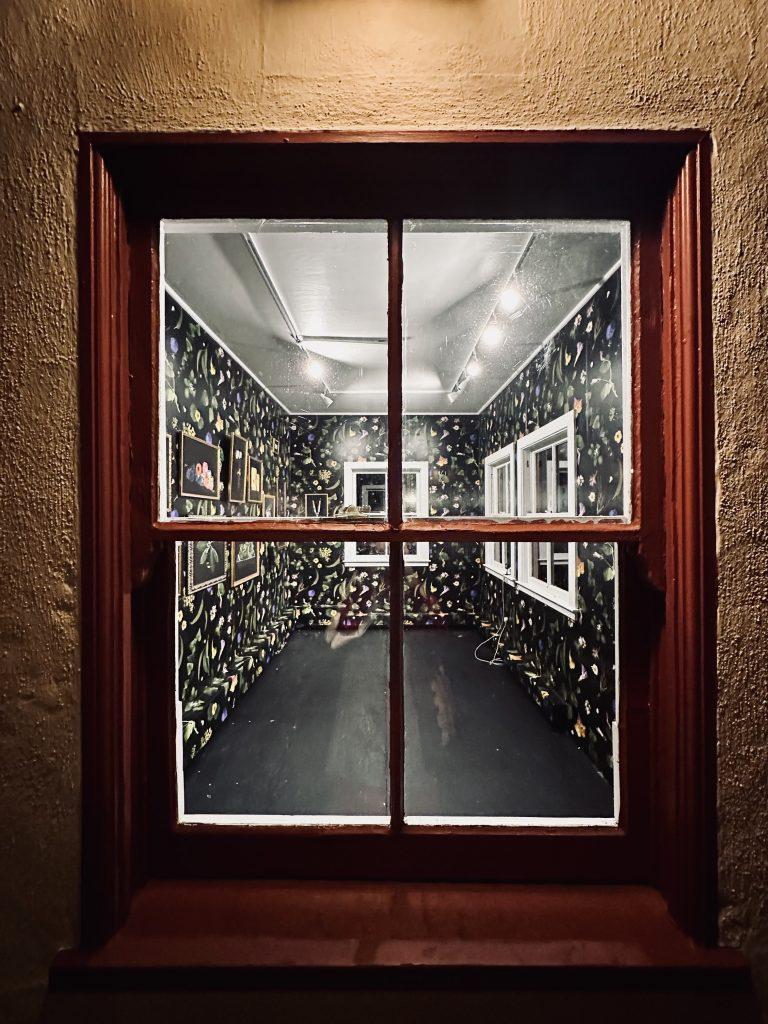 It also features Lucas’s framed photos of native species like the endangered Franciscan manzanita, and of the tools used by staff at the Presidio Nursery at Golden Gate National Parks Conservancy to propagate and tend to these indigenous plants.

Reflecting on the whirlwind day, the exhibition almost seems like a metaphor for San Francisco during FOG. By which I mean local artists and art organizations—carefully tended by the area’s dedicated art enthusiasts, such as Hutchinson—still in bloom amid transplants from all over the world.