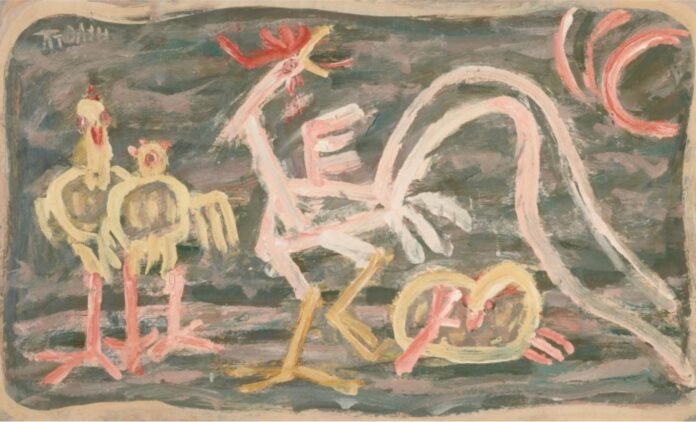 All eyes might be on Seoul’s art market as Frieze Week begins, but the city also has one of Asia’s most extensive and well-funded networks of museums—many of which are staging ambitious shows for the arrival of the international art world. From national institutions to private spaces, here are seven exhibitions to check out while you are in town.

The donation of the late Samsung chairman Lee Kun-Hee’s vast art collection to the Seoul National Museum of Modern and Contemporary Art (MMCA) in 2021—to cover a $10bn inheritance tax bill—was a major coup for the museum. Among the trove’s highlights are around 80 works by the painter Lee Jung Seob that he made between the 1940s and 50s. They are now shown alongside ten works already in the museum’s collection for the artist’s first major solo exhibition in six years. Two paintings, Chicken and Chicks and Children Playing in the Water, both 1950s, will be seen by the public for the first time.

Lee’s trademark style—pastoral scenes in thick Fauvist brushstrokes—is set across the backdrop of the Korean War, which ruptured his personal life, forcing him to send his wife and two children to Japan for safety. During this period, Lee made his most intimate works, including a number on paper and tinfoil that he sent to his family. Evidence of his paternal tenderness can be found in the 1950s painting Two Children and Fish, and Crab, which he duplicated to ensure his children wouldn’t fight over ownership of the work. Love letters to his wife, illustrated with images of flowers and detailing his feelings of loneliness, are also included. Lee died of hepatitis, alone, in 1956; his wife is still alive today.

Hito Steyerl: A Sea of Data

It seems strange that it should have taken Hito Steyerl this long to receive a solo show in South Korea. The artist, who explores how images are disseminated in an increasingly globalised and technologically dependent world, seems a natural fit for a country of blazing-fast broadband speeds and one of the highest rates of surveillance by CCTV.

This expansive and ambitious exhibition spans three decades of Steyerl’s practice, from 1990s documentary-esque video works about German identity to a new four-channel video installation commissioned by the MMCA that touches on ecology, Keynesian economics and NFTs. Further works include The Tower (2015), an immersive installation about a video game that is based on Saddam Hussein’s unrealised plans to reconstruct the Tower of Babel in Babylon.

Do Ho Suh and Children: Artland

Exhibitions are increasingly becoming more child-friendly, but few centre the thoughts and creativity of young minds quite like this new ongoing project by Do Ho Suh, devised in collaboration with his two daughters, both under the age of 13. Since 2016, the trio have been building Artland: a fantasy land of farms, rivers and islands, as well as the imaginary flora and fauna that dwell within them—all made from multi-coloured children’s modelling clay. According to Suh, this world is gender neutral and devoid of a central government.

The trio are now opening up Artland to the public, inviting young visitors to add their own creations to the structure from clay provided by the museum. In many senses this conceptually daring, yet wholly accessible exhibition is a departure from Suh’s large, painstakingly executed fabric works recreating his former homes that have made him one of Korea’s most internationally recognised artists. But it is important to consider the parallels between Artland and Suh’s more better-known practice, which deals with the impermanence and fragility of homes, and the body’s relation to space.

Last year the Thai artist Korakrit Arunanondchai debuted his video-installation Songs for Dying (2021) at the 2021 edition of the Gwangju Biennale to much fanfare. The dense work, which broaches his grandfather’s death, the 1948 Jeju massacre and recent student protests in Bangkok, now returns to South Korea as part of Arunanondchai’s first solo exhibition in the country.

At the ArtSonje Centre—a pioneering, 24-year-old art space in Seoul with an internationally focused programme—it is shown alongside another video-installation, Songs for Living (2021). The latter was made in collaboration with the New York-based cinematographer Alex Gvojic, who creates “hyper-reality” environments to suspend the audience’s belief. The works are both staged in a space likened by its curator Sunjung Kim to an “inverted theatre”, which will swap the positions of the audience and the performer.

The first pan-Asia show staged by the Samsung Foundation’s private museum brings together works by 24 artists or collectives that represent the continent’s rapid cultural ascent in the past few decades. Many of the works speak to a sense of futurity, whether in their thematic preoccupations or, in the inclusion of virtual reality, their form. Vietnamese architect Doàn Thanh Hà’s Floating Bamboo House, a large structure made from bamboo and recycled plastic bottles, emphasises how Asian architects and creatives are at the forefront of rethinking housing and urban planning from a sustainability perspective.

This is the fourth edition of Summer Love, a group show of emerging, mostly Korean artists held by the non-profit SongEun Art Space, which last year relocated to an impressive Herzog & de Meuron-designed building. For the exhibition, 13 artists who have shown with SongEun before have been invited to stage a work. There is little to no curatorial thread here, besides the fact that they are all under the age of 35, so think of this less as a thematic exhibition, and more as an opportunity to get acquainted with a cohort of exciting (likely new) local names. Highlights include Minsook Kang’s video on illegally planted Christmas trees and Hana Kim’s painting based on, and incorporating, the fabric of a yoga mat.