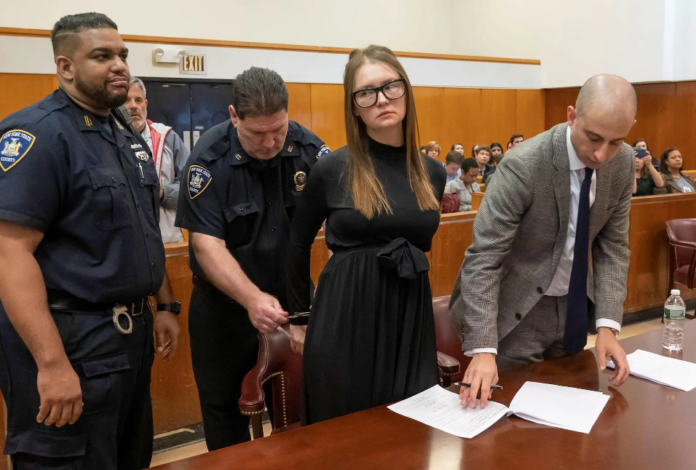 Anna Sorokin, better known as Anna Delvey, the scammer who was convicted in 2019 for swindling New York socialites and defrauding banks, has entered the market for non-fungible tokens (NFTs). Sorokin announced Thursday that she is launching her own collection of NFTs that come with additional perks, including direct access to the fraudster.

“I see this first drop as an opportunity to directly connect with my audience and to take charge of the narrative that’s been largely outside of my control, until now,” Sorokin states on a website that promotes the project, titled Reinventing Anna.

Sorokin, a Russian national who between 2013 and 2017 posed as a German heiress with a $60m inheritance, is currently in custody after overstaying her visa. The 10 NFTs she minted are images that depict a credit card illustrated with scenes from her life. Designed by alternative comics creator Johnny Ryan, the first drop depicts a woman behind bars who tells a visitor, “You look poor.”

Buyers will also receive access to Sorokin “via exclusive live streams and other online and metaverse events”, according to the website. An elite group of “top holders” will have a chance to speak on the phone with her and receive sketches drawn by the con artist as well as personal items from her time behind bars. A representative for Sorokin tells Page Six that these physical tokens range from stationary to signed T-shirts and underwear.

The project’s title nods to Inventing Anna, a fictionalised Netflix mini-series that chronicles Sorokin’s elaborate schemes of borrowing large amounts of money and forging bank statements as she floated between luxury hotels. The so-called “Soho Grifter” was convicted in 2019 of grand larceny and sentenced to four-to-12 years in prison but was released last year on good behaviour before getting picked up by federal law enforcement. Despite the reference in its name, Reinventing Anna is Sorokin’s attempt to pivot from this criminal past.

“I’d love to be given an opportunity for people not to just dismiss me as like a quote-unquote scammer and just see what I’m going to do next,” Sorokin says in an interview with NBC.

Sorokin has been promoting her own art, from jail, in other ways, including through a print drop of works “made with correction facility pens and pencils on smuggled watercolor paper”. Last April, she worked with artists to organise a group show titled Free Anna Delvey, which included one of her works, listed for $10,000. The show’s co-curator Julia Morrison says that she has not been paid back for the $8,000 she put down as an investment, and that Sorokin has blocked her phone number.

Sorokin joins the many high-profile figures, from Grimes to Paris Hilton, who are cashing in on the NFT trend. While NFTs have exploded in popularity, they are also easily hijacked by scammers. Counterfeits are rife on digital marketplaces, and theft continues to be common as hackers take advantage of the largely unregulated market. OpenSea, the largest NFT platform, is currently facing at least four lawsuits from collectors whose digital assets were stolen. In February, the company also de-listed 1,138 NFTs after artists, including Anish Kapoor and Damien Hirst, said that they had not authorised their works to be minted.

Don’t Know How to Start Investing in Art? Fintech Startup Arttrade Has a Solution