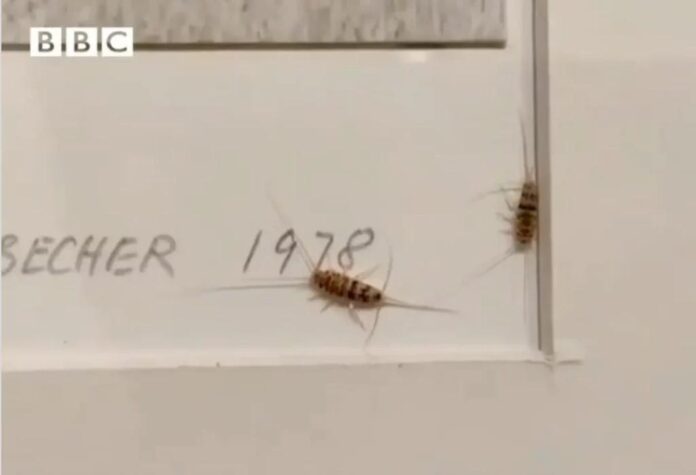 In what is perhaps the most Kafka-esque situation at any museum ever, the Tehran Museum of Contemporary Art announced via Instagram yesterday that it would temporarily close to deal with an infestation of silverfish.

In a video posted by BBC Persia, two silverfish—mostly nocturnal insects that tend to feed on starchy materials like paper—were caught in the act scurrying across a photograph by the 20th-century German photographers Bernd and Hilla Becher.

The video, which has been viewed over one million times and garnered more than 1,300 comments on Instagram, shows only two of the pests. But where there is one, there are likely many, raising concerns not only for the Becher work, but also for the rest of the museum’s collection.

“A field investigation has been done and an external expert will come to the museum for further investigation,” museum director Ebadorreza Eslami-Kulai, who took over the reigns just this year, told Iranian news agency ISNA. “There is no concern. These things can happen when the works are taken out of their packaging and brought to the galleries.” Eslami-Kulai said the Becher work was not damaged.

Founded in 1977 by, Farah Pahlavi, the wife of the last Shah of Iran, the museum holds 3,000 artworks from the 19th and 20th century, including examples by Andy Warhol, Francis Bacon, and Pierre-Auguste Renoir. It is widely considered to be one of the most important collections of Western art outside of Europe and North America.

This is the second scandal to rock the museum in recent months. In March, former director Ehsan Aqai was fired after a mishap in which performance artist Yaser Khaseb accidentally fell into fellow artist Noriyuki Haraguchi’s artwork, (1977), which consists of a large vat of oil.

Further back, in 2016, the museum was at the center of geo-political wrangling when two touring exhibitions, one planned for Berlin and another for the MAXXI Museum in Rome, were cancelled after Iranian authorities failed to give export licenses to exhibit the works.

The museum will now be closed for fumigation from August 18 to 19. The museum did not respond to Artnet News’s request for comment.