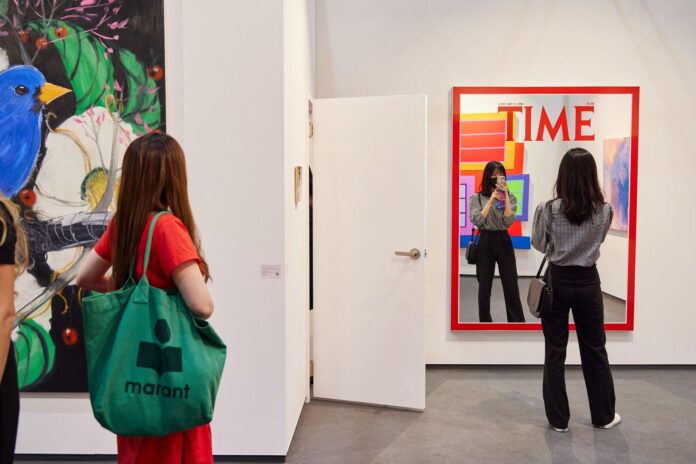 Much has been written about South Korea’s rising young collecting class born after 1980—known locally as MZ, a portmanteau of millennial and Gen-Z—that is fuelling its current art boom. Now finally it is the subject of a comprehensive, government-backed study that breaks down the figures behind how and why they spend. The newly released report Analysis of Korean Millennial and Generation Z Art Collectors, commissioned by the Korea Art Management Service (KAMS), surveyed 1,361 collectors and also interviewed galleries, auction houses and also art advisors about MZ collectors.

The survey establishes that MZ collectors are mostly digital natives with high education levels, fluency in English, and equally strategic about investment as they are ravenous for culture. Having grown up with the internet, and instilled with strong educational values, they tend to research studiously about art, using information sources ranging from museum art classes to YouTube, social media and influencer-driven online content. They are strongly influenced by celebrity art collectors in their ranks, most famously BTS’s RM, the singer G-Dragon and the actor Yoo Ah-In. Most MZ collectors were raised by well-educated parents who had one to two children.

Of the MZ collectors surveyed, around 60% had bachelor’s degrees and 30% had a master’s. Collectors in what Koreans call the XB Generation—a combination of Generation X born between 1965 and 1979 and Baby Boomers born 1946 to 1964—were 54% female, whereas in MZ, women represent 63.1% of collectors.

Why do they buy art?

Of the MZ collectors surveyed, 88.6% say they buy a work of art primarily because they like it—the most popular response. The second most popular reason is art’s interior design appeal, linked to repeated, strict lockdowns across Asia forcing people to remain at home, according to 34.6% of respondents. The same amount said that art has become a more appealing investment amid rising inflation worldwide.

However, these motivations changed when accounting for top-tier collectors, where investment motivated 67.9% of respondents. Speculative investment remains rampant throughout the Korean art market, the survey finds, as in much of the global and Asian market. But, somewhat reassuringly, MZ collectors were slightly less prone to reselling work in the past decade, at 15.6%, compared to XBers, at 19.3%. Moreover, half of the MZ sellers did so in order to purchase new works.

How do they spend this money?

Despite young Koreans having a reputation for favouring Western artists, MZ collectors are also more frequently buying emerging Korean artists, mostly because of their low budgets and partly for pragmatic reasons like shipping costs, international wire transfers and inexperience buying expensive works from international galleries. The survey finds that 46.3% of MZ collectors had recently purchased works by emerging Korean artists, compared to only 22.7% of XB collectors. Moreover, they appreciate artists who share their sensibilities, references and sometimes social circles. Tapping into MZ nostalgia at a time of fast-paced urban change is multimedia artist Heejoon Lee, who found Korean streetscapes drastically altered when he returned from studying in the UK. His work, which deals with shifting memory, combines photography with geometric abstraction.

Other emerging or mid-career artists who are cited as desirable by MZ collectors include Sangho Noh, who integrates brightly coloured mixed media and paintings with fashion brands, and the graphic artist Kwangsoo Park, who has collaborated with the band Hyukoh. Both are now represented by established South Korean commercial galleries: Noh by Arario and Park by Hakgoje. These artists initially lacked support from museums and big galleries due to their age, and midrange galleries shied away because of their low price points and more experimental artworks. However, five to six years ago, more MZ gallerists started opening up spaces friendlier to emerging artists, and since the 2020 boom, MZ collectors’ expanding circles began holding events and shows for young artists, often supported by KAMS.

The result is a diverse group of increasingly successful breakout artists, including the sculptor Haneyl Choi, whose queering of Korean masculinity is current the subject of two commercial shows at the Seoul galleries P21 and Gallery2. And Jonghwan Jang’s paintings, mostly on animal skins, veer into the cartoonishly surreal. Anime and other cartoons also inform the works of Seungcheol Ok, who uses Pop Art imagery to question definitions of originality. The survey finds that the buying of these artists is sustainable and is not at risk of creating a bubble, because the Korean galleries they work with are experienced enough to keep prices stable.

Ultimately, MZ collectors still require more education to understand and engage with the social and historical values of art. But the underlying cultural enthusiasm of these smart investors and fast learners will drive a greater maturation that only comes with more time and experience. The future is bright.

• Henna Joo is an associate professor at the Graduate School of Arts and Cultural Management at Hongik University and the main author of Analysis of Korean Millennial and Generation Z Art Collectors. She previously was a director of Arario Gallery.