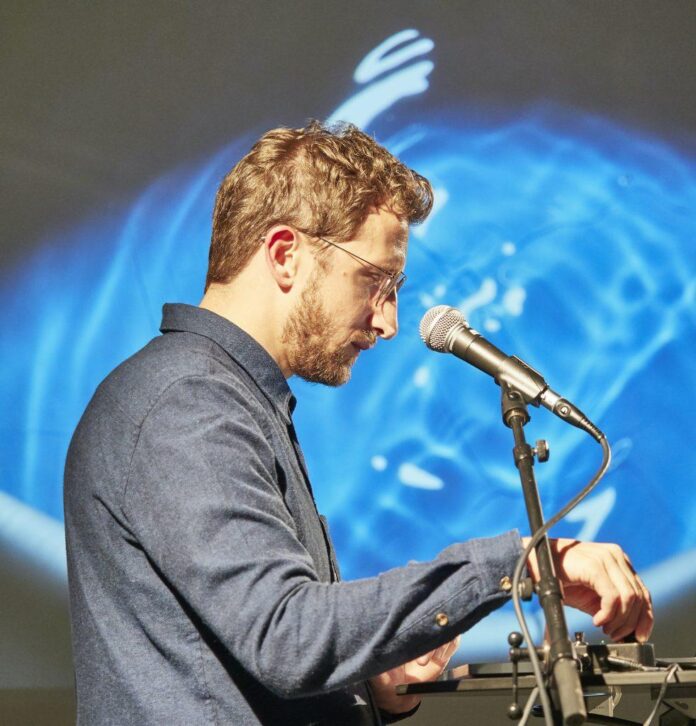 Many Lebanese will tell you how they hear a buzz in the air. Sometimes it’s faint and sometimes it is more prominent, but it’s always there. The monotone has become a constant within the backdrop sounds of everyday life, along with the regular hum of the generators now providing electricity (to those who can afford it) in a country locked in an extreme economic and political crisis.

The source of the continuous drum is the thousands of Israeli fighter jets, missiles, drones, and planes that have been making incursions into Lebanese airspace over the past 15 years.

Lawrence Abu Hamdan has long decoded the world through sound. The Jordanian, Dubai-based artist’s work, as he once described it, is concerned with the “politics of listening.” A self-proclaimed “private ear,” since his youth, he uses surveillance technologies, sound recordings and archival materials to investigate the role of sound as a tool used to silence, suppress, and heal.

In his latest body of work, the Turner Prize-winning artist explores the impact of the continuous sound of the Israeli fighter planes on the Lebanese population. The result is Air Pressure (A Diary of the Sky), an ambitious 3D sound and video installation on view at Fondazione Sandretto Re Rebaudengo in Turin, Italy, until February 5, 2023. 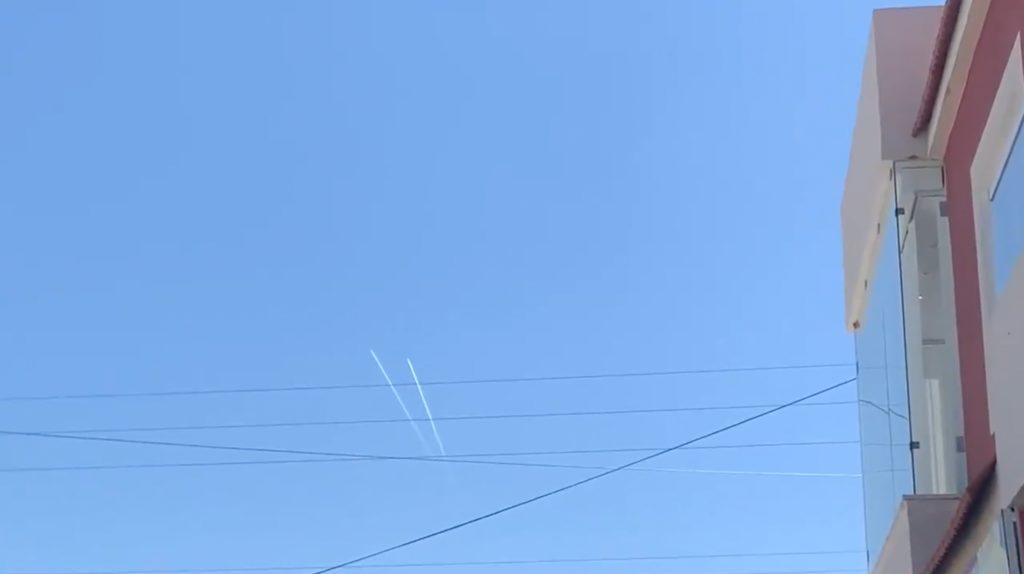 The conflict between Israel and Lebanon is decades old, but became particularly pronounced when Israel invaded Lebanon in 1982 during a period of civil war, and then again during the 2006 war between Israel and Hezbollah, Lebanon’s Shia Islamic political party and militant group. These noisy illegal flyovers, averaging around four and a half hours in duration, are intended to leave the Lebanese in a perpetual state of psychological distress and uncertainty.

Speaking to Artnet News, Abu Hamdan said the reactions to the sound generated from the massive explosion at Beirut Port on August 4, 2020, partly inspired him to make the work.

At the time, Abu Hamdan had been doing work analyzing the sound of Russian airstrikes in Syria. He knew that the sounds heard during the Beirut explosion weren’t continuous with the sequence of sounds heard when an airstrike happens. “It was just too quick,” he said. “You wouldn’t have heard the plane so closely for an explosion like that and have no one see a plane.”

But if it wasn’t a plane, what was it? Just before the Beirut Port blast there was a sound in the air akin to that of a plane. According to research conducted by the likes of Dutch investigative journalism group Bellingcat, just before a pressure wave of that magnitude, there is a vast suction of oxygen that makes a sound like that of a jet. Abu Hamdan presented this belief on Instagram to discuss the idea with those who were convinced they had heard a plane.

“I realized that whether there was a plane or not, the idea of this constant presence in the atmosphere emerges in moments of peak anxiety in Lebanon,” Abu Hamdan said. For Lebanese the planes have become so routine that they “have lost their discursive value—they are no longer spoken about,” Abu Hamdan tells Artnet News. “They are just there. It is a terror that is a given.”

But all that changes when things get really bad, and all of a sudden, the planes “leave their status as objects humming and rumbling in the background, and come to the forefront to trigger questions as to what is happening in the country.”

Abu Hamdan worked on Air Pressure (A Diary of the Sky) over the last two years during lockdown in Lebanon, after receiving the third edition of the Fondazione’s Future Fields Commission in Time-Based Media. Building the multimedia installation began by capturing and analyzing hundreds of recordings of Israeli military jets, missiles, drones and planes across Lebanon’s skies. He also conducted recordings on the ground and crowd sourced real-time footage on social media with the Arabic hashtag # حربي_بالاجواء which means “war in the air.”

The project also includes information gathered from 243 letters recording all the radar information including: the time, duration, type and trajectory of each aircraft violation, submitted by permanent Representatives of Lebanon to the United Nations between 2006 and 2021. Transcribing and analyzing this data was a challenging process, Abu Hamdan said, as the filing of these letters in the UN’s digital archive was unsystematic.

He archived his research on the website Airpressure.info, which now documents how over the last 15 years, 22,111 Israeli military aircraft have violated Lebanese airspace. The site makes public the violations in detail for the first time. Crucially, Abu Hamdan’s project marks the first time anyone has documented the ongoing incursion of Israeli fighter jets, which neither journalists, nor the Lebanese government, nor the United Nations has undertaken to do.

“I wanted to put all the information in one database so we could finally see the scale of this issue—how long these aircrafts are spending in the atmosphere and how many planes there were,” he said. The numbers are shocking—adding up the flight time of the more than 22,000 Israeli aircrafts in the atmosphere over the past 15 years is eight-and-a-half years itself. “That means that over half of the last 15 years there has been an Israeli combat vehicle in the Lebanese sky.” 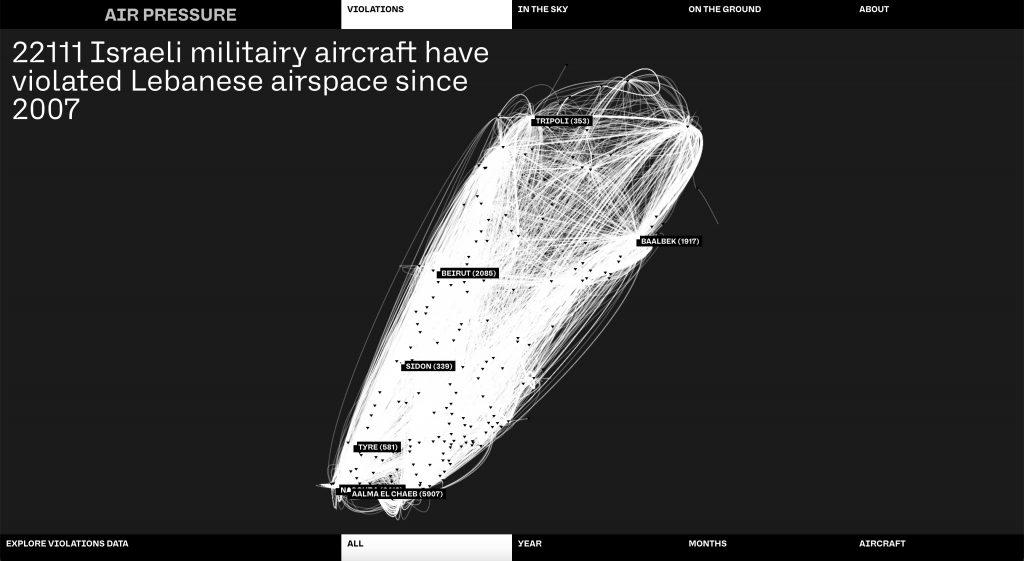 The 3D installation, which through sound and film hauntingly captures the buzzing sound and views of Lebanon’s airspace, encourages reflection on the contemporary conditions of aerial warfare. It is testament to Abu Hamdan’s continual investigations into the still largely undocumented and discussed political implications of listening during times of war.

“Activating the atmosphere through sound has always been a part of an arsenal of weaponry,” said Abu Hamdan, adding that he hopes the information can be used to contextualize any possible future aerial strikes, or in the context of other discussions such as the maritime border dispute happening now between Lebanon and Israel.

The work, like that of other similarly powerful sound works of Abu Hamdan prompts us to rethink the role noise and listening plays in our daily lives and in accordance with specific world events. As he puts it, it prompts us to ask: “What can this teach us about the history of aerial warfare which has always been about disproportionately creating noise in the sky rather than hitting targets on the ground?” 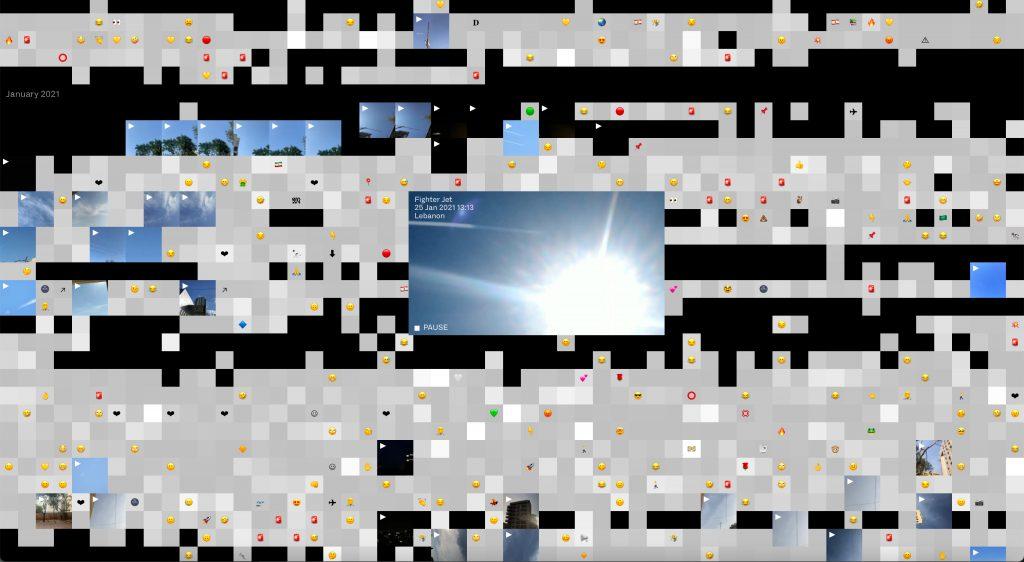 Research gathered from Abu Hamdan’s work, which is due to be shown at the UN Security Council, has already become a resource for political debate not only in the public sphere but among government agencies and bodies at the United Nations.

Above all, the work is also about how something supposedly neutral like air, and nature itself, can be made violent through man’s interference. “The work is about how air is turned violent more than the question of whether or not the planes had a right to enter a country and whose air belongs to who,” Abu Hamdan said. “The work raises the question of atmospheric violence and how to understand this as a category of warfare that is not about targeting one person but actually creating broadcasting and fostering collective punitive action and collective fear.”