Home News ‘We Are Not Perfect People—Like Any Other People’: Qatar’s Art Scene Wants... 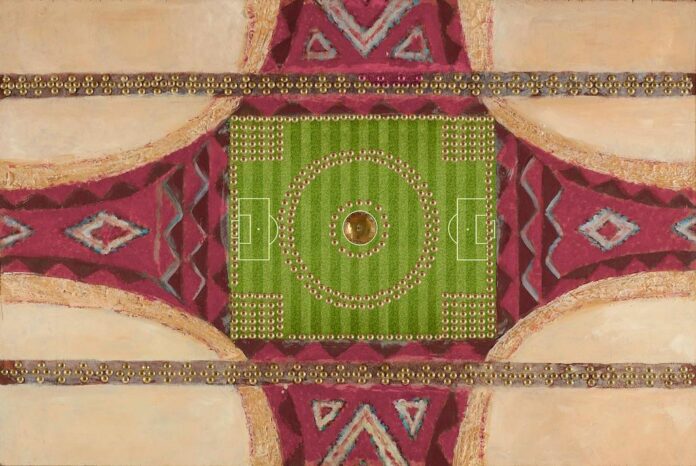 Qatar’s Lusail soccer stadium, which glistens like a golden jewel on the outskirts of the capital of Doha, is a short drive away from a sleek metropolis that was purpose-built for the World Cup games, which come to a dramatic close on Sunday, December 18. The so-called Lusail City, which has piles of debris amid its newly erected high rises, is proof of the Lusail stadium’s nearly surreal sprouting up from the desert sands; it is also a poignant reminder of all who worked (and died) building it.

Indeed, it’s been a headlining World Cup—not just because of thrilling matches and what they symbolize to the countries playing and watching, but also because it is one of the most controversial editions in its history. The event has been subjected to a near-constant western media backlash against Qatari politics, the repression of Qatari women, LGBTQ+ rights, and rules around alcohol. Another major issue has been migrant worker deaths, which according to official state counting, range between 400 and 500 people over the last decade (some maintain that the number is higher). The issue has catalyzed Qatar to overhaul its labor system radically. In Europe, some officials have been arrested for taking bribes from Qatar.

Yet allegations of corruption, oppression, and deadly working conditions have caused troubling responses, too, in some cases. In early November, a cartoon by a French newspaper Le Canard Enchainé depicted Qatari footballers as terrorists, sparking outrage on social media, with some users calling out its “blatant Islamophobia” and “racism.”

Members of its art scene had been hoping for a different outcome: dialogue. “If your house is made out of glass, you don’t throw stones at others,” Qatari businessman, art collector and patron Tariq Al Jaidah told Artnet News. “To the people, whoever they may be, who bad-mouth Qatar and the region, we are not perfect people—like any other people.” 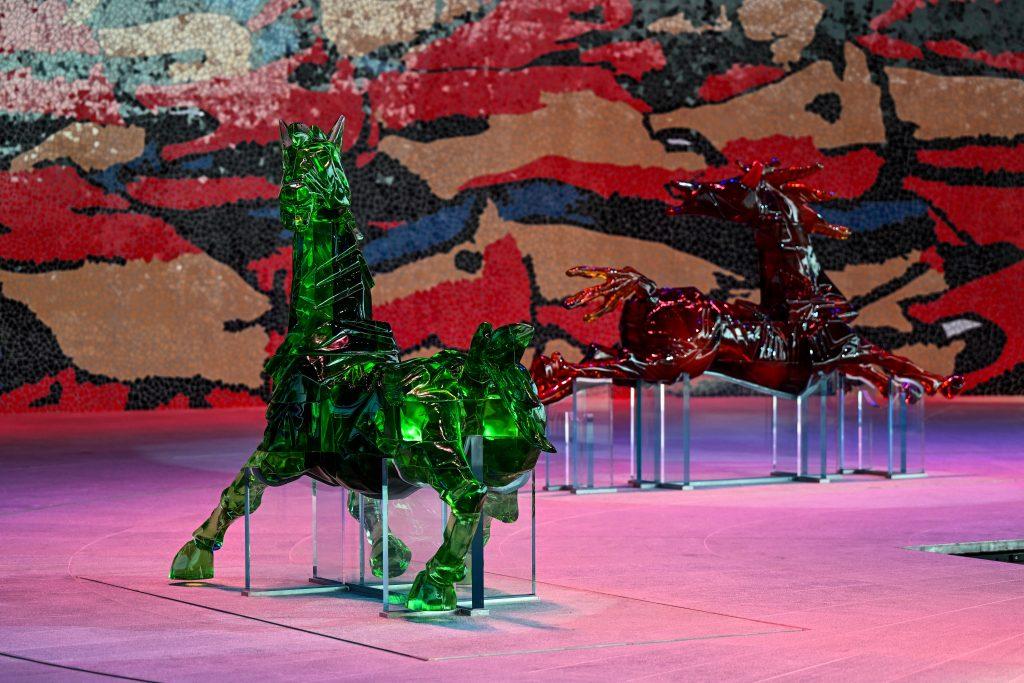 An art installation by late artist M.F. Husain, entitled Seeroo fi al ardh is seen at Education City, Doha, Qatar, on December 13, 2022. It is part of Qatar Foundation’s collection of public art that includes over 150 artworks by local and international artists, including the final artwork of M.F. Husain. Photo by Ina Fassbender/Qatar Foundation

Much of the criticism from the West, say some members from Qatar’s rapidly developing art scene, is misleading and reinforces false stereotypes of a country whose residents say is not as regressive as much of the international media coverage has made it out to be.

“Art is the most important voice,” added Al Jaidah, who founded the Katara Art Center, a contemporary art and multidisciplinary creative enterprise, in 2012. He also owns Eiwan Algassar Art Gallery, a gallery dedicated to modern and contemporary art that is run out of the St. Regis Doha, a five-star hotel.

Ghada Al Khater, a Qatari artist, told Artnet News that there has been little coverage of Qatar’s “thriving art scene” around the World Cup, despite all that has been going on within the nation’s cultural landscape. “You have people from around the world and from all walks of life” in Qatar, she noted, adding that it has “created a massive opportunity for Qatari artists to show their work.”

Al Khater is one of many Qatari artists who created art for various artistic campaigns commissioned around the World Cup. Using traditional references, she created a collage of a stadium for a curated drop by Emergeast, a leading online gallery in the region that features art by women.

The wool is not over their eyes, but Qataris are nevertheless proud of how far their art scene has come in recent years. “At a time of increased opportunity for cross-cultural dialogue, false cultural assumptions of Qatar and the Middle East tainted the [World Cup],” said a spokesperson from Emergeast in a statement. 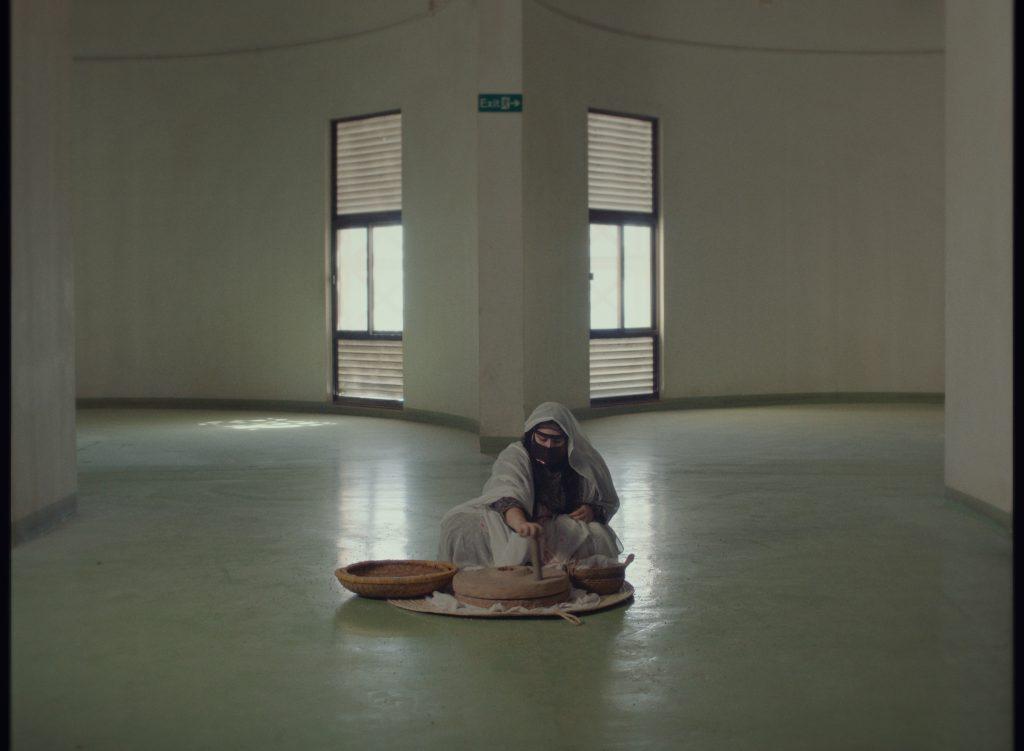 Qatar’s wealthy art scene has grown in tandem with the state’s preparation for the World Cup; an effort to move its economy away from dependency on petroleum and natural gas has led to an expansion in investment into culture and tourism.

When the Mathaf Museum of Modern Art opened in Doha in 2010—the same year the nation won the bid to host the World Cup—it signaled a turning point for the Middle East’s modern and contemporary art. Since then, Qatar injected billions into its cultural scene. In March 2022, Qatari global art patron Sheikha Al Mayassa Al-Thani, the sister of Qatar’s ruling Emir Tamim bin Hamad Al Thani, announced that Qatar would build three new museums to further expand its cultural offerings. Sheikha Al-Thani is also known for her purchase of large-scale contemporary artworks by the likes of Takashi Murakami, Richard Serra, Jeff Koons and Yayoi Kusama—which have been stationed around the country, at times amid outcry from local Qataris. Despite the criticism, she remains on a mission to bring international art to the nation.

The scene also had faced challenges. Not far off in the rear-view mirror is the Qatari blockade, which ended just under two years ago. For a time, the nation faced a boycott by its neighbors—Saudi Arabia, the United Arab Emirates, Bahrain and Egypt—who accused it of supporting terrorism.

During the blockade, Al Khater, the artist, said that she felt inspired to use art as a tool to communicate. “I was struggling with how to get my work seen,” she noted. “When the blockade happened … There was a lot of language and stereotypes generated in the media that didn’t resonate with me. I felt it was up to the writers and the artists to assert their voices.”

Al Jaidah, the collector, said “art was utilized during the embargo, and we are still using it.” During the blockade, he noted that works by Saudi artists Abdulnasser Gharem and Manal AlDowayan continued to be displayed at the Mathaf Arab Museum of Modern Art in Doha. While relations are still tepid between Qatar and several of the boycotting countries, the rulers of Saudi Arabia, as a well as heads from the United Arab Emirates and Kuwait, were among those at the opening ceremony, paving the way to future unity and cooperation. Al Jaidah is in talks with people in Saudi Arabia to do a show of Saudi art in Qatar.

Some feel such nuance is missing in international coverage. “We know the truth; I see the harshness only in the media, not in real life,” noted Ameera Al-Aji, a Qatari artist and head of the Qatar Foundation’s Community Arts Lead. She has been speaking through her interdisciplinary work about the emotions of being “a female, mother, and professional.”

Similarly, Qatari filmmaker Amna Al-Muftah’s Fi Thrika (in Memory of)  underlines the importance of women in running the household when men used to go pearl diving—the predominant source of income in the Gulf before oil was discovered.

“As a filmmaker I want to share the stories of local Qataris to the outside world,” she told Artnet News. “For me personally, it’s a responsibility to fill the void, project the Qatari voice to the outside world to correct some of the stereotypes and misconceptions, and create bridges.” Her work is on view at the Qatar Flour Mills Company in Doha, the future site of the Art Mill Museum, an international modern and contemporary art developed by Qatar Museums slated for completion by 2030. 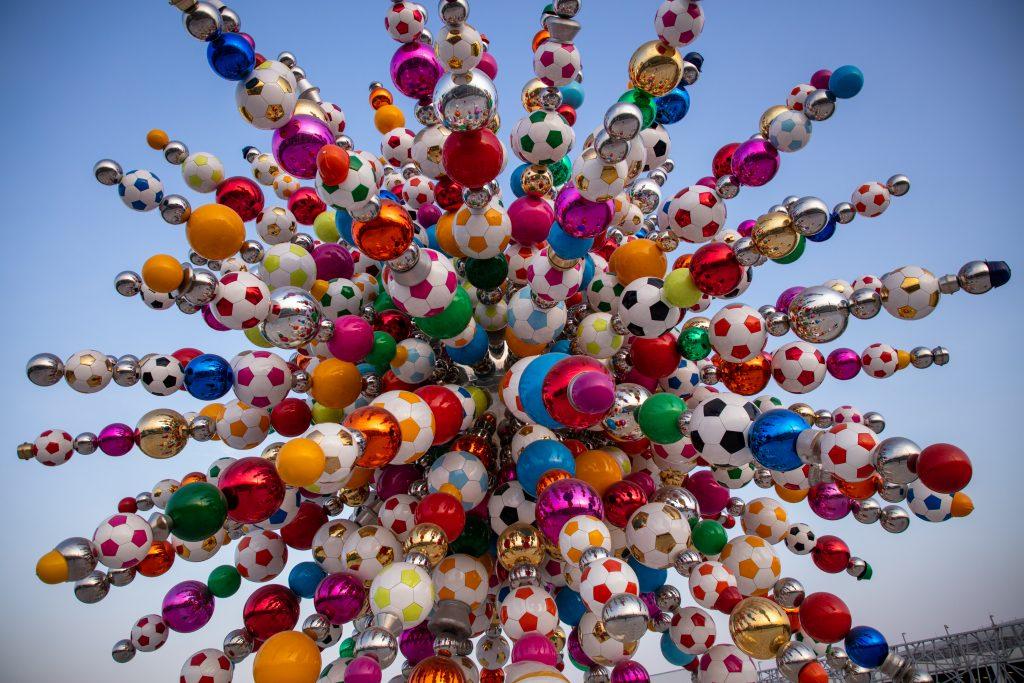 A vibrant 12-meter-tall (40 feet) installation in the shape of a dandelion spore composed of workers’ helmets, footballs, mirror balls, and traditional Qatari found objects can be found on a grassy lawn in Qatar Foundation’s Education City in Doha, a non-profit established in 1996 by the nation’s Emir Sheikh Hamad bin Khalifa al-Thani. The foundation, which was also co-founded by Sheikha Moza bint Nasser Al-Missned, a major patron for art and culture, hopes spearhead the state’s transformation into a modern, knowledge-based economy by 2030.

Works like the mixed media sculpture, which is called Come Together and was made by South Korean artist Choi Jeong-hwa, is a vessel for conversation. The piece pays tribute to all those in Qatar, both native and foreign, who helped to realize the dream of hosting the 2022 FIFA World Cup. It inevitably ties in the controversies, too, around the migrant deaths.

Perhaps it speaks where others cannot. Layla Bacha, a project manager for Qatar Foundation’s Art Portfolio, said the work “does not take any position, but celebrates the people who worked on the event.” She added that it creates “a debate just as any artwork fosters debate.” But the work, she underlines, is one reflection of how the foundation aims to spur dialogue on key social issues.

The installation is among other art pieces in the foundation’s collection that recognize the efforts of workers across all industries in Qatar. There is Faraj Daham’s mixed media work from 2011 called Street Language, which depicts Qatar’s migrant workers. Other pieces, like M.F. Husain’s art performance piece Seeroo fi al ardh, which means “travel through the earth” in Arabic, can be seen to reinforce the foundation’s ideals of tolerance and diversity. The Indian artist, who sought self-imposed exile in Qatar following threats from Hindu nationalists, received Qatari nationality in 2010.

“Art is a tool for social improvement,” noted Bacha. “It’s a vehicle that can spark creativity, promote cultural heritage, and foster innovation, dialogue and exchange—elements recognized as important for the development of society.”

The artist takes us through a week in his life.