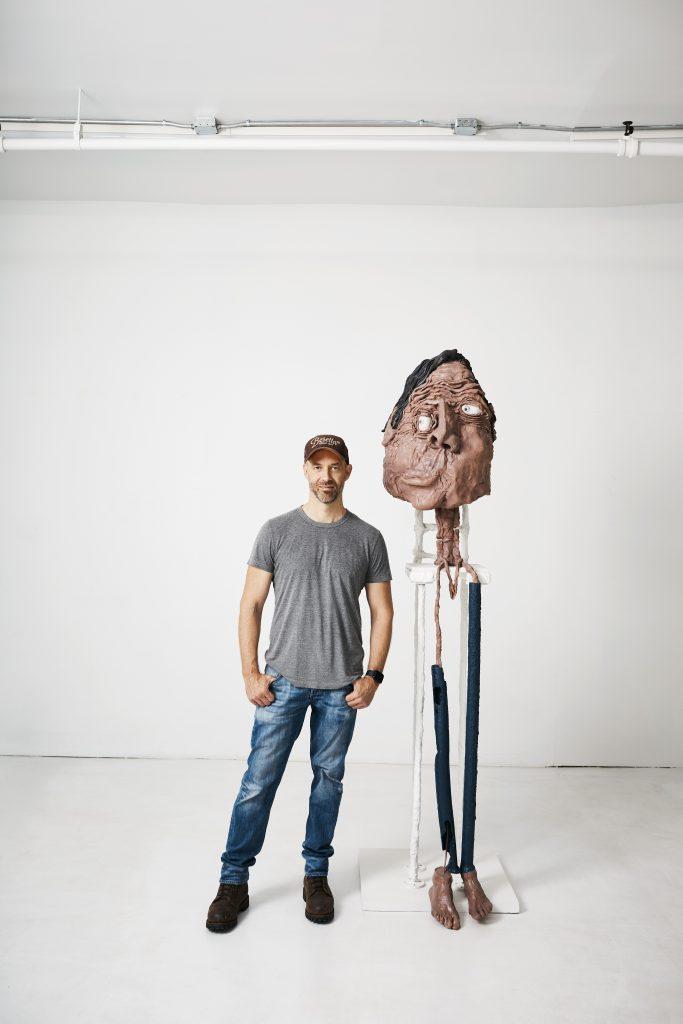 When he happened upon his current studio space some 20 years ago, the New York-based sculptor Will Ryman was in search of a place to workshop his plays, rather than create art. The Bowery loft he found through a newspaper ad appealed, he said, because “it had nice high ceilings that I could hang lights from.” Ryman had gotten his start in the downtown theater scene, focused on Absurdist works by the likes of Albert Camus, David Mamet, and Dario Fo. “At the time, I was trying to figure out a new theatrical medium,” he explained. “I was experimenting with staging a play with no dialogue and no actors. Just objects—sort of a three-dimensional flip book. So I began to sculpt the characters in my plays with papier-mâché and wood. That is how I began sculpting and working with materials. I have been doing this ever since.”

Those works garnered Ryman his first gallery show, at Klemens Gasser & Tanja Grunert in 2004. To this day, before he picks up a mound of clay for modeling, he relies on a research process rooted in narrative writing. He counts H.C. Westermann, Basil Wolverton, Ed Kienholz, Claes Oldenburg, and Harvey Pekar among his touchstones. “Recently I have been into flipping through graphic novels like American Splendor and looking back at Mad Magazine. There are serious personal stories that have a funny political undertone,” he said.

For his new show “New York, New York,” which opened earlier this month at Tribeca’s Chart gallery and runs through October 22, Ryman pays homage to his hometown by cataloguing some of its hyper-specific genera: pigeons pecking at a spilled bucket of popcorn, a towering mound of trash overflowing its wire can, two expressive women, seemingly mid-diatribe on a park bench, one twirling pasta from a cardboard clamshell. There is even a nod to his memorable Park Avenue installation The Roses (2011), in the form of a lightly littered flowerbed. As he was wrapping up these works, Ryman gave us a look inside the studio where they were made. 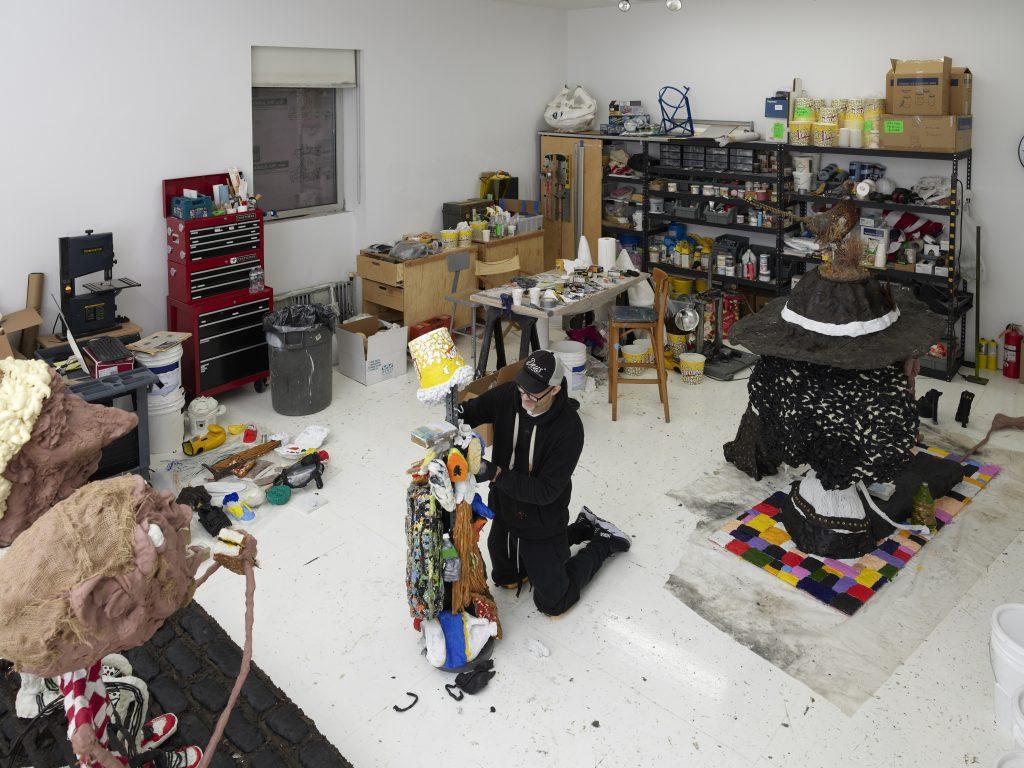 Will Ryman in his Bowery loft. Photo: Elisabeth Bernstein.

I usually go to my office and try to meditate for a few minutes. Then I answer emails, and start to research and read, and think.

What is a studio task on your agenda this week that you are most looking forward to?

Well, I just opened a show called “New York, New York” at Chart Gallery. The work in the show is a body of work I returned to, from when I first started sculpting. It’s almost entirely intuitive and automatic: I didn’t use any tools except my hands, and the concepts are about my own experiences and observations while growing up in New York City. The show references the absurdity of the American dream and the juxtaposition of hope and happiness growing out of dirt and trash and the everyday.

So right now, I am cleaning and reorganizing, creating a bare space so that I can start my next project. And I am going back to writing a play that I put aside last year.  I can’t go into the specifics of it, because I am still developing it and I need to keep it fresh. But I will say that it takes place in New York City. 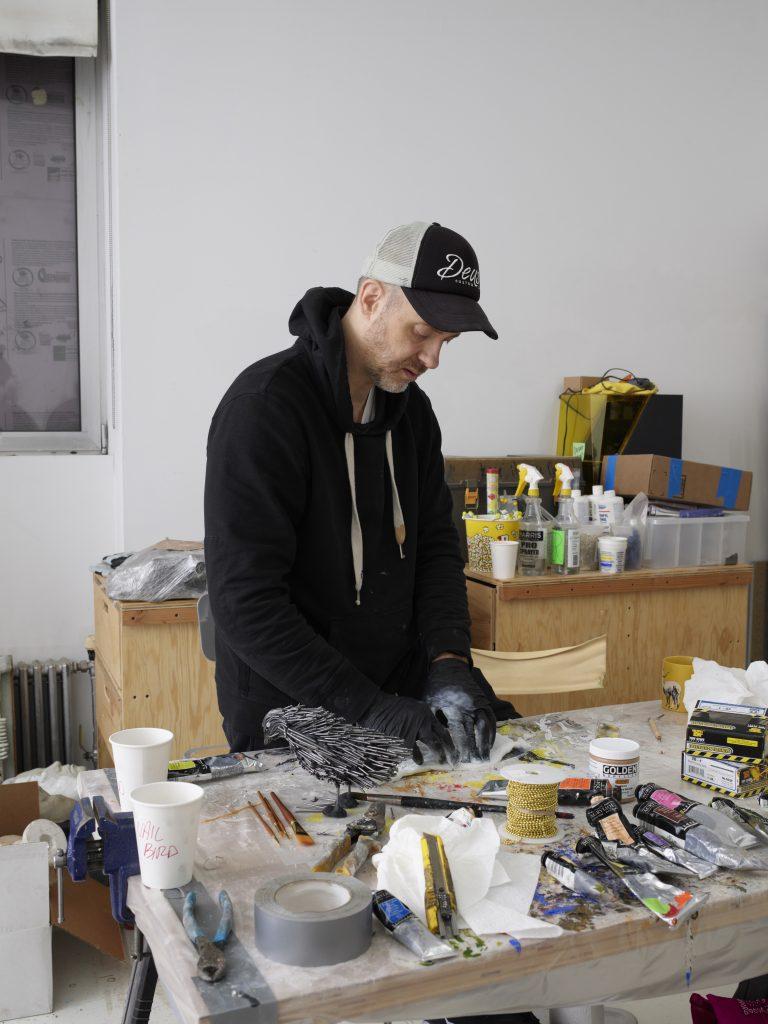 Will Ryman with one of his nail-covered pigeons. Photo: Elisabeth Bernstein.

What tool or art supply do you enjoy working with the most, and why?

The tools I use the most and rely on most are my hands. I try to not use any tools at all, for conceptual reasons, unless I need to refine it.

What kind of atmosphere do you prefer when you work? Is there anything you like to listen to or look at while in the studio for inspiration or as ambient culture?

When I’m working I sometimes like it to be quiet. But usually, I listen to some of my favorite films. I download them and listen to them while I work. I change it up every week or so. Right now I am listening to , which is one of my favorites because it’s a timeless and poetic story about two polar opposite friends trying to find their dreams in the underbelly of New York. There are only three main characters: Joe Buck, Ratso Rizzo, and New York City itself. It was shot in the 1960s (I grew up here in the ’70s), so it’s familiar to me. The symbols in the film are fascinating to me as well, because they embody the anti-American dream. 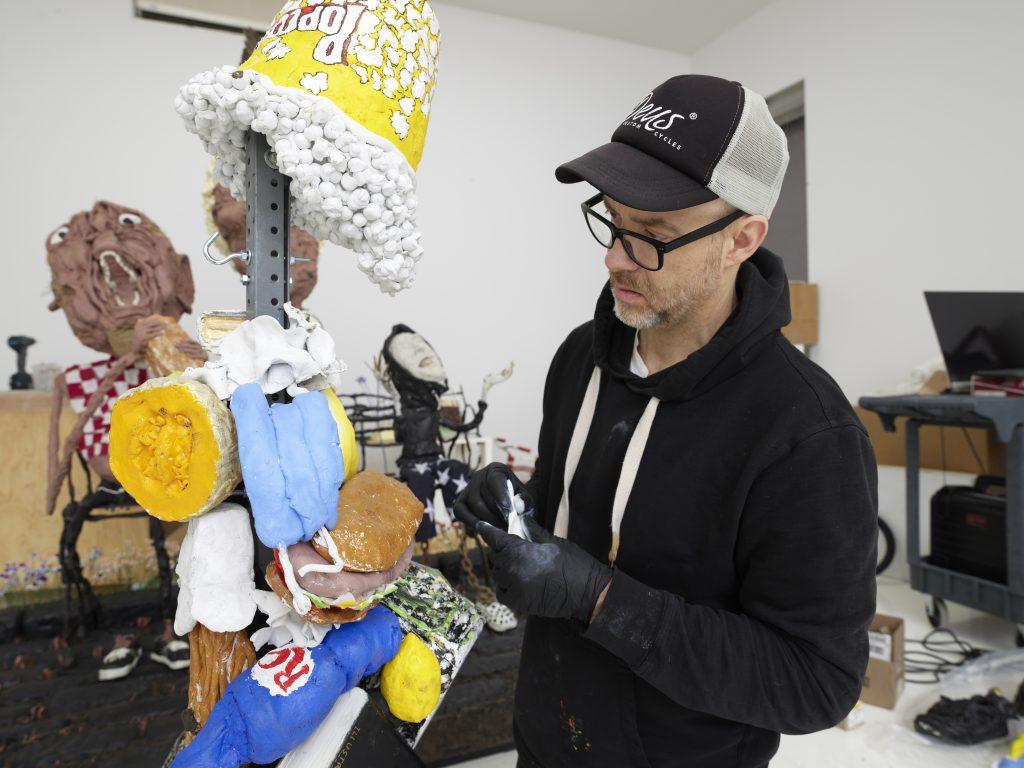 Will Ryman in the studio. Photo: Elisabeth Bernstein.

I never really know until it’s done and I spend time looking at it for a while. Sometimes for a few days. If nothing is bothering me or making me hesitate, then I call it complete.

Occasionally, I let the work sit for a while and then revisit it. I don’t believe in abandoning something. I push through.

What images or objects do you look at while you work?

I don’t look at anything while I work. I commit all my focus to what I’m doing. 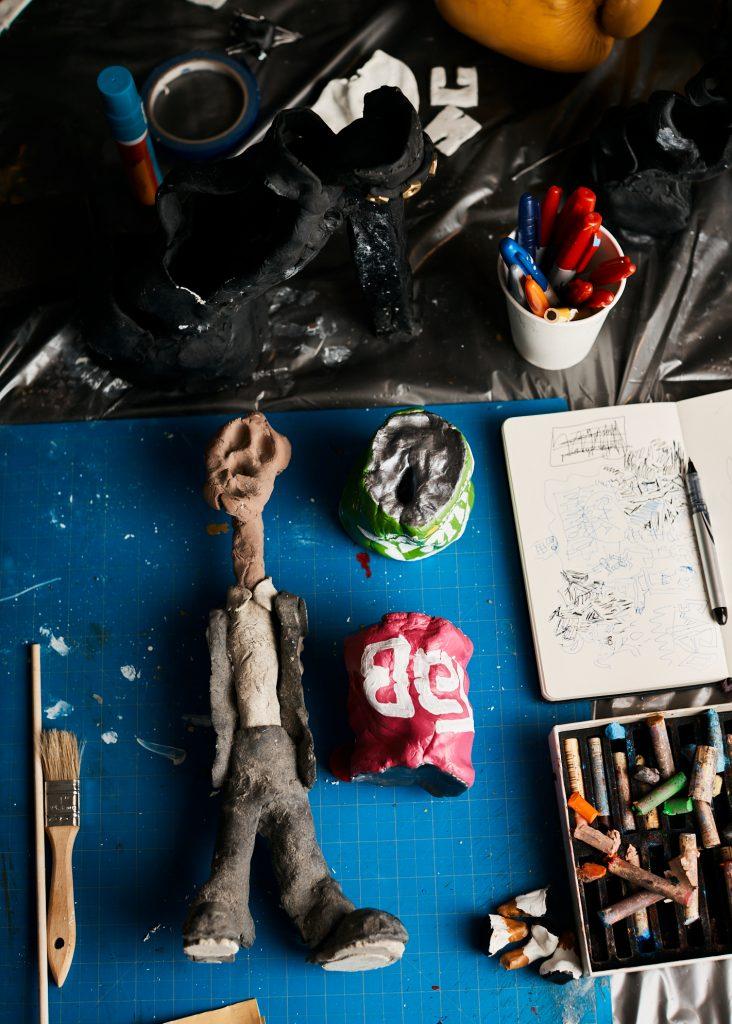 Is there anything in your studio that a visitor might find surprising?

Possibly some of the found objects that I collect. I have a historic collection of telephones, from the 1900s to now. I have an old NYC pay phone and a fire hydrant. I am a sports fan as well, so I have some sports memorabilia. One was a Christmas gift from Paul Kasmin, which means a lot to me. 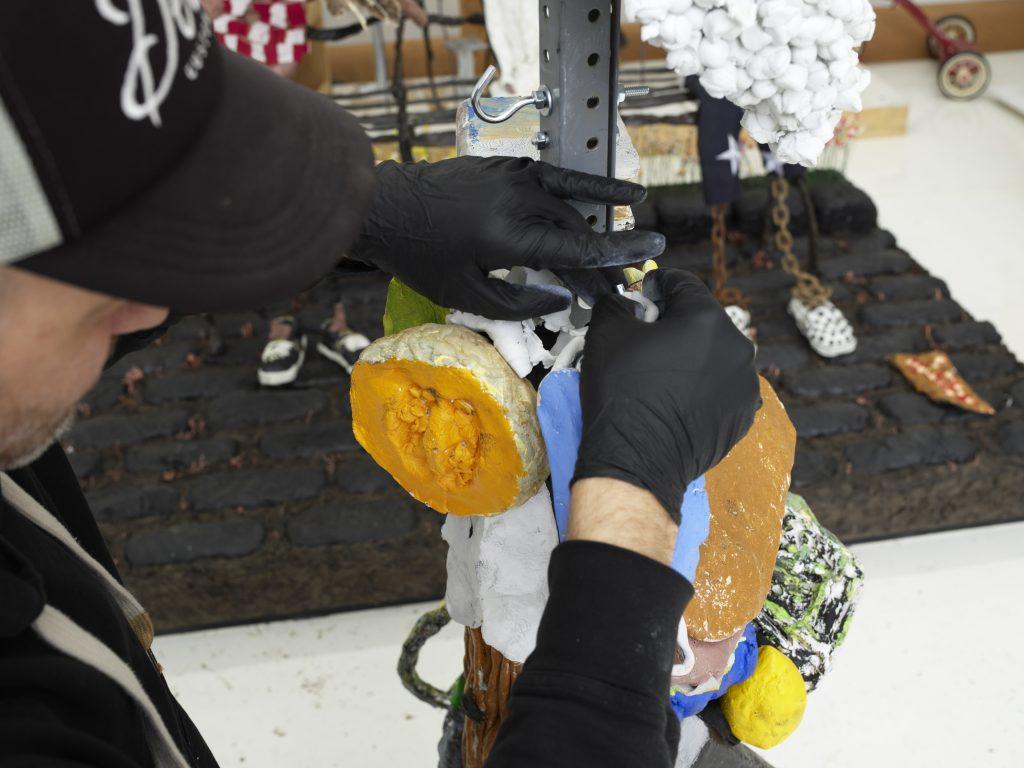 Will Ryman at work in his studio. Photo: Elisabeth Bernstein.

My studio is a private space. It’s really the only place that I can go and close the door and be completely free. I arranged it to be creative, no outside distractions from the world. I consider the space to be modular so that I can create any environment that is required—for theater, narrative, or contemporary art. I use the architecture of the studio as a material. It’s where I can create my sculpture to dialogue with my plays. 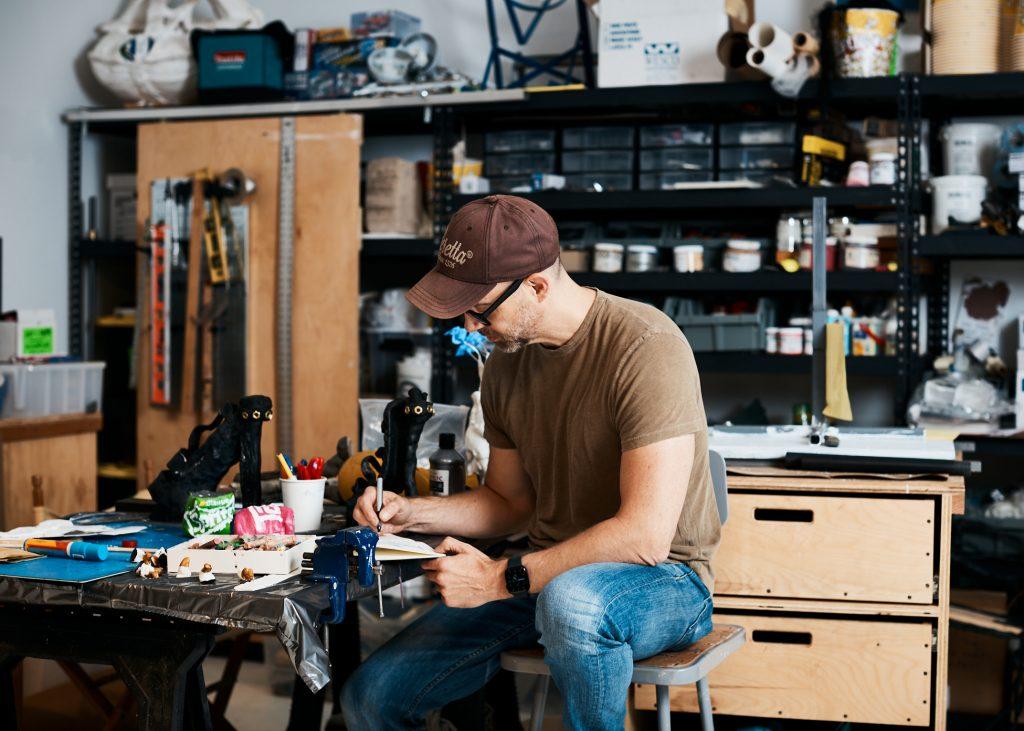 Will Ryman at his studio desk. Photo: Weston Wells.

What’s the last thing you do before you leave the studio at the end of the day (besides turning off the lights)?

I am usually exhausted, and so I will meditate for five minutes to bookend my studio time and  transition into going home.

Raphael Paintings You Should Know

Opium Traces Found in 3,500-Year-Old Pottery Shows That Ancient Canaanites May Have Been the First Humans to Use Psychoactive Drugs