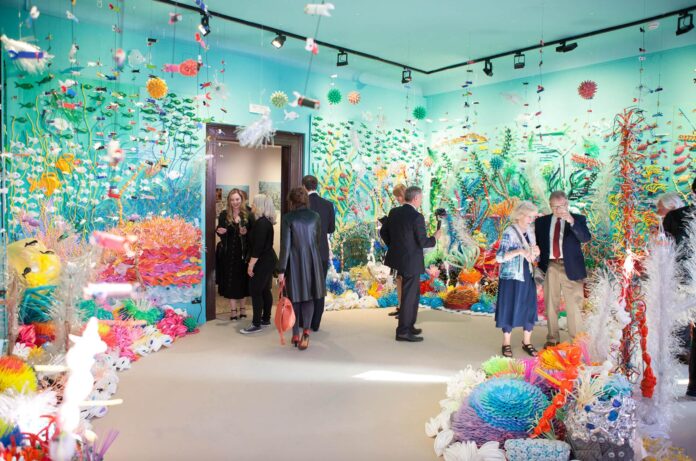 “Pay-to-play” galleries, which charge artists hundreds, if not thousands, of pounds upfront to exhibit in group shows are on the rise.

While arguably giving a leg-up to artists early on in their careers, many say the practice preys on insecurities in an increasingly tough profession. “It is difficult, because in the beginning, your CV is empty and you need to fill it with something—group shows, awards, competitions, anything,” says one British artist who wishes to remain anonymous. “Everyone’s desperate. You want to believe that someone’s discovered you and they are offering you something, so you fall for it.”

According to one contract seen by The Art Newspaper, an established Mayfair gallery is asking artists to stump up more than £4,000 to participate in a group show in London. In addition, artists must pay commission on sales and bear the cost of shipping to and from the gallery.

Other businesses mentioned by multiple artists The Art Newspaper spoke to include Brick Lane Gallery in London, whose website openly points out that charges to exhibit in group shows range from £660 for three metres of wall space to £1,980 for nine metres; the European Cultural Centre in Venice, which is understood to charge between €12,000 and €15,000 to exhibit; the Cube Art Fair, which costs as much as $7,000 to participate in; and ITSLIQUID, which operates independent art fairs and exhibitions and charges “entry fees” in the region of €300.

Charging artists to exhibit at art fairs—but not taking a cut on sales—is not uncommon. The Other Art Fair, for example, invites independent artists to participate for a fee. Luca Curci, the director of ITSLIQUID, notes that its fee covers several services, “among them the mounting and dismantling of the exhibition, the press office work, the opening ceremony, a dedicated video interview and a published interview, shared on all our socials, website and some magazine partners”. The business does not charge any commission on sales, Curci stresses.

The dealer Gregoire Vogelsang, who founded the Cube Art Fair, operates a similar model. “The artist or their gallery representative pays a fee upfront to the organiser of the fair and reaps 100% of the sales [they make] during the show […] The participation fee includes everything—stand, lighting, storage, signage, etc,” he says. “Typically artwork featured for sale at the Cube Art Fair range anywhere from €5,000 to €200,000, with an average pricing around €10,000-€20,000.”

‘Not illegal, just misleading and unethical’

Nina Comini, a board member of the European Cultural Centre, which is a non-profit foundation, notes that the organisation’s break-even point for its Venice show is €3.6m. Of its financing structure, she adds that 60% of presentations are bankrolled by galleries, 20% by governmental institutions, 15% by the centre itself and 5% by artists. “We are very well-aware that this is not an ideal situation, but due to lack of funding by the European Union, or any other governmental institution, and ourselves not being rich enough, especially after Covid, we see no other way how to make these exhibitions happen,” she says, adding that the organisation does not take commission on sales.

Of course, sales are never guaranteed.

Some artists say these galleries fail to even promote their shows properly. As one puts it: “They will pretend that they are a real gallery who are interested in your work, when in fact, they just want to make money. They don’t have a list of collectors to promote you to, they don’t invite anyone to the private view and they don’t show your work to anyone. It’s up to us to do all the marketing and show the work to people. It’s not illegal, it’s just very misleading and unethical.”

No matter, says one artist. “The point is, they don’t care if you sell or not. They are hedging their bets by charging a fee upfront.” They add: “I know it’s tough for galleries—of course they take a risk every time they organise a fair or an event. But they know that there are always artists who don’t know the market well.”

Other red flags that “pay-to-play” galleries might present include asking artists to pay for their own shipping and rushing them to make a snap decision about an imminent show.

Awards and competitions are also being run as businesses, according to another artist, who says he now has “a huge credit card bill” thanks to an emerging artist prize he won. “They are money making machines,” he adds.

When an artist wins a prize, they are often given a solo show alongside cash. But the costs of fabricating, framing and transporting works can sometimes be placed on the artist, even if that show is abroad. On top of that, it is not uncommon for prizes to claim around 40%-50% on any sales, according to one artist. “When I won a fairly prestigious award, it looked fantastic on my CV and on social media, but I didn’t sell anything. Being a winner really adds up,” they say.

As galleries and art businesses struggle to make money, charging artists to exhibit—whether in group shows, art fairs or awards—appears to be a growing phenomenon. “It’s happening more and more,” the prize-winning artist says. “Businesses are struggling to make money. So they’re looking for ways to monetise, because it’s guaranteed they’ll get something regardless. It’s not a risk for them, but it’s a risk for the artists.”

Art Week Tokyo Bussed Around 350 Foreign VIPs for Its First Event Since Travel Restrictions Were Eased. Many Preferred It to Another Art Fair