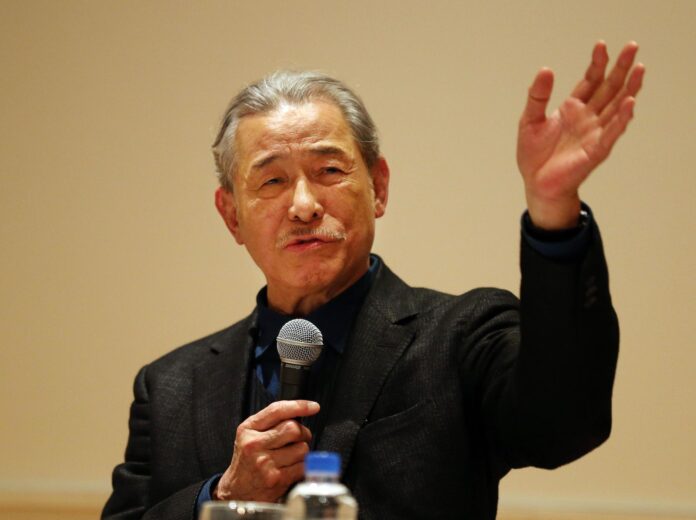 Issey Miyake, one of the leading fashion designers of the late 20th century, has died, aged 84.

Miyake was the innovative leader of a diverse band of Japanese designers who have changed the face of haute couture and high-street dress over the past four decades, and helped make contemporary fashion a staple of costume institutes and museum retrospectives. Miyake, Yohji Yamamoto, Rei Kawakubo, Junior Watanabe and the late Kenzo Takada, have brought to their clothes—each of them in their very distinctive ways—a mix of minimalist calm and historically informed couturier’s craft, underpinned by a respect for the structural beauty of the kimono and the power of traditional Japanese calligraphy and tatoo art. Two of Mitake’s designs are currently featured in the Metropolitan Museum of Art’s Kimono Style.

In the 1980s Miyake’s work in particular acted as a painterly and wearable antidote to a global fashion and entertainment world that was dominated by the permatanned excesses of padded shoulders, brash colours and big hair.

Miyake made his name as a master of pleats—reviving a lost art perfected by Mariano Fortuny, in silk, in the 1930s—notably in his headline-grabbing 1994 Flying Saucer dress, which was shown in the Metropolitan Museum’s Covid-delayed 150th anniversary exhibition About Time: Fashion and Duration in 2020. But Miyake, who did not care for the cost and impracticality of haute couture, brought this side of his work to the high street in 1993 with his Pleats Please clothes—now collectors’ items—where heat-treated polyester was used to create genuinely unisex, permanently pleated, free-flowing, one-size-fits-all garments. In 1997, Miyake produced another customer-friendly concept in “A Piece of Cloth” (A-POC), which allowed people to create their own clothes from a tube of fabric by cutting along pre-knitted, dotted seams.

Miyake made another kind of headline when he supplied what became a trademark polyester-cotton turtleneck to the co-founder of Apple, Steve Jobs, a piece of clothing that became as much of a brand marker for the biggest tech company in the world as the bitten-apple logo and the curve of a corner on the iPhone. On a trip to Japan in the 1980s, Jobs had admired the practical chic of the grey uniforms worn by Sony workers, and that company’s chief, Akio Morita, told him that Miyake had designed them. Jobs got no traction at all when he suggested that Apple staff might wear something similar, but the introduction bore fruit, as Jobs explained to his biographer Walter Isaacson: “I asked Issey to make me some of his black turtlenecks that I liked, and he made me like a hundred of them… I have enough to last for the rest of my life.”

Miyake was born in Hiroshima, Japan, in 1938. He survived when an atomic bomb was dropped by the US Air Force on the city while he was at school on 6 August 1945, but his mother died three years later from radiation sickness. In 2009, Miyake, who had long been reluctant to be labelled “the designer who survived the atomic bomb”, wrote a powerful op-ed article on his experience for the New York Times, in which he encouraged then-US president Barack Obama to visit the city to demonstrate his commitment to eliminating nuclear weapons. “When I close my eyes,” Miyake wrote, “I still see things no one should ever experience: a bright red light, the black cloud soon after, people running in every direction trying desperately to escape.”

In the same article he revealed how this traumatic experience made him determined to look forward. “I gravitated toward the field of clothing design,” he wrote, “partly because it is a creative format that is modern and optimistic.” He studied design in Tokyo before moving to Paris in the 1960s, where he worked with the couturiers Guy Laroche and Hubert de Givenchy. In 1970 he set up the Miyake Design Studio in Tokyo, and showed his first collection in New York City the following year.

Miyake had a long-standing connection to art and artists. In Paris he had discovered and been much impressed by the work of Alberto Giacometti and Constantin Brancusi. In New York in the late 1960s he befriended Robert Rauschenberg and Christo. He became a great admirer of the Viennese-born British potter Lucie Rie, whose work he had stumbled on when he opened a book on ceramics in a London bookshop. He organised the 1989 exhibition Issey Miyake Meets Lucie Rie in Tokyo and Osaka, describing it as a tribute to the emotional contact he felt with the artist. “I was surprised that Lucie’s work, largely unknown at the time, was so well received,” Miyake told Vogue. “Every piece was displayed, floating upon the surface of a gigantic rectangular pool.” One of Miyake’s 1989/90 collections featured overcoats with some of the array of multi-coloured stoneware buttons that Rie had made during the Second World War. When Rie died in 1995, she left Miyake her ceramic button collection.

From 1996 to 1998 Miyake ran a Guest Artist series, where contemporary artists, starting with Yasumasa Morimura, used his durable Pleats Please clothes as a canvas. Morimura’s work built an elaborate but bold relationship with the nude figure at the heart of the 1856 Jean Auguste Dominique Ingres painting La Source. The point, for Miyake, was that this work was not complete until this artistically printed jersey dress was worn by a third party. “When I make something,” he said, “it’s only half finished. When people use it—for years and years—then it is finished.”

Miyake handed over the running of his business, which had expanded into fragrances—including L’eau d’Issey—and other merchandise, to others in 1997, to focus on research into new fabrics and production techniques, fuelled by his interest in the connection between technology and creativity. As well as the Met, his clothes are held by insitutions including the Museum of Modern Art in New York, the Victoria & Albert Museum, London, and the Denver Art Museum, where pieces by Miyake and Yamamoto are hung alongside Japanese traditional garments. The cool elegance of Miyake’s creations lent itself well to photography. And the first 15 years of his atelier’s production is captured in a lavishly cool monograph, Issey Miyake & Miyake Design Studio 1970-1985 (Works Words Years) (1985). A landmark retrospective of his work was held at the National Art Center in Tokyo in 2016, covering 45 years of his design work.

The positive streak that had first drawn Miyake to making clothes as something modern and optimistic remained with him. “Clothing means, in Japanese, hifuku,” he said, “then hifuku means happiness. And probably I am trying to make hifuku, happiness, for the people. And for myself.”