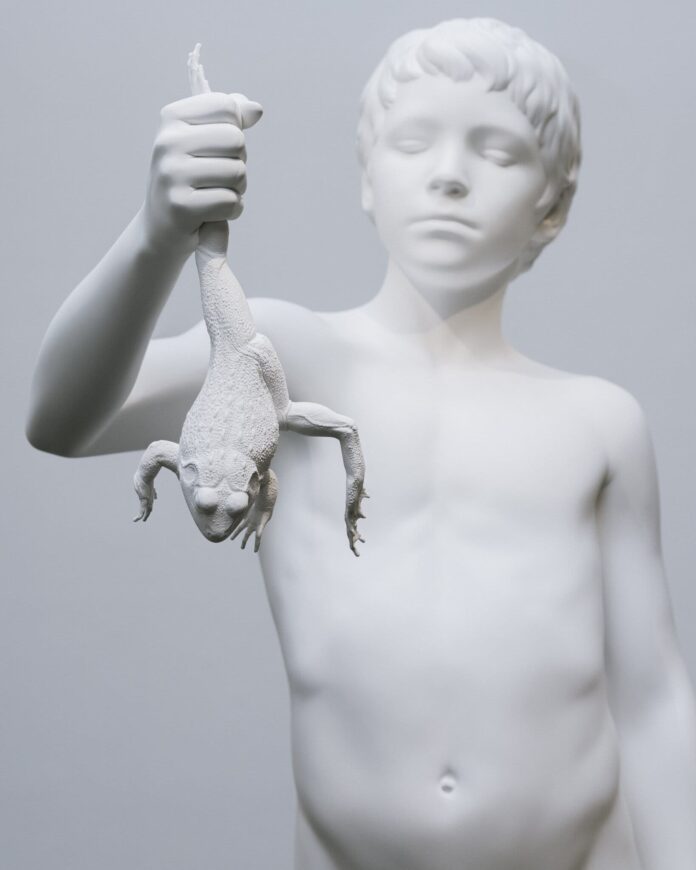 Familiarity breeds surprises at the Met’s survey of the American sculptor, whose work suggests that the past is never dead — in a good way.

The Metropolitan Museum of Art has never looked as sharply contemporary, even hip, as it does with the exhibition “Charles Ray: Figure Ground.” This daringly streamlined show surveys the five-decade career of the remarkable American sculptor Charles Ray in a mere 19 artworks, three of them photographic pieces. They occupy a spacious gallery of 9,600 square feet divided by a single wall. The expanses of dark unoccupied stone floor feel less like the Met than the fourth level of the Whitney Museum’s old Marcel Breuer building on Madison Avenue. Welcome to now it seems to say.

Before you read a single wall text, the show’s open vistas signal that space itself is a major consideration for this artist, as it was for his Minimalist and Post-Minimalist elders Donald Judd and Richard Serra. But Ray had a busier agenda, one that, expanding over the years, has come to include American history, literature and pop culture as well as the history of sculpture itself. Ample space is especially important to the ever-stronger figurative sculptures Ray has made since 1990, works in which distortions of size, scale or proportion often have a visceral, even disturbing effect on viewers. And this effect is provocatively complicated by seeing his sculptures from different distances and angles.

It is one thing to look at a 9-foot-high sculpture of a naked man made of silvery, softly gleaming metal from 30 or 50 feet and another to peer up at him when you are much closer, awed by his height and intrigued by his relationship to a smaller adolescent male beside him, who bends almost double, cupping his hand close to the floor of the gallery, as if to scoop something up. You may begin to wonder if the power of this two-figure sculpture which stands firmly on the floor, reflects the fact that the figures have the density and stillness of stone: They are solid stainless steel, an industrial material, and finished by hand. The wall label clarifies while a genuine enigma starts to take shape. The work is titled “Huck and Jim,” the main characters of “The Adventures of Huckleberry Finn” — one an adult fleeing slavery, the other a white man-child, who sail down the Mississippi on a raft, and for what it’s worth, spend a lot of their event-filled journey without clothing. It leaves the viewer with a complex ball of wax to contend with, one that includes homoeroticism, masculinity and America’s lasting self-inflicted wound, racism.

Nearby, “Boy With frog” presents another enigma: a larger than life boy — 8 feet tall. His white-painted stainless steel body recalls Greek marble, also 19th-century sculpture derived from it, like Hiram Powers’s 1857 “Fisher Boy,” owned by and on view at the Met. The boy observes the frog with a hooded malevolence while his flawless skin implies innocence, in striking contrast to his victim’s exquisitely detailed roughness.

Ray belongs to a generation of sculptors born mostly in the mid-1950s who refused to take Minimalism for an answer. The reductive style had virtually eliminated object-making among the Conceptualists. But younger artists returned to the object with a new consciousness. Ray and artists like Robert Gober, Kiki Smith, Jeff Koons, Alison Saar, Ana Mendieta and Takashi Murakami found ways to bring the figure, and narrative, back into sculpture.

Ray’s efforts have hewed closest to traditional sculpture, especially in their use of realism while also updating some of Minimalism’s most cherished beliefs — its rejection of sculpture’s base, its love of industrial materials used lavishly, its attention to detail and its concern with size and proportion. The combination, in effect, defines him as a radical conservative.

Ray was born in Chicago in 1953 and received a B.F.A. from the University of Iowa in 1975 and an M.F.A. from Rutgers University in New Jersey in 1979. In 1981, he accepted a teaching job at the University of California Los Angeles, took up residence in the City of Angels and has lived there ever since.

Ray made serious work while still a student, goofing brilliantly on the art of his immediate predecessors. For a while it seemed like he might be a jester in the court of serious art. The two large black and white photographs of “Plank Piece I and II” (1973), one of the earliest works at the Met, show the artist riffing on early Post-Minimalism’s emphasis on soft pliable materials and on artists’ using their own bodies. He goes on better, uses his body as a soft material, pinning his limp form to the wall with a thick plank of wood as if it were a sheet of soft lead in a sculpture by the young Serra.

Over the next decade Ray devised numerous performance-related sculptures, often Surrealist in tone. No surprise, this way of working exhausted him. Ray must have realized that if he wanted the body in his art, it could no longer be his own.

It is to the credit of the show’s organizers, Kelly Baum and Brinda Kumar, that this carefully selected show effectively outlines the growth of Ray’s sensibility, its steady opening out since the late 1980s; its shift of focus from personal to civic space; and its achievement of a kind of perfection or specificity that conveys the concentration and arduous methods by which these works, which sometimes take 5 to 10 years to realize, come into existence.

Ray’s first figurative sculptures, which appeared in 1990, were mannequins — arguably the most visible examples of contemporary figurative sculpture on America’s vast consumerist landscape. Produced to his specifications by professional mannequin makers in painted fiberglass with glass eyes, these works permitted alterations of size and scale as a means of startling the viewer. At the Met the earliest mannequin piece is “Boy” from 1992, a very pale, redheaded, blue-eyed child, maybe a mama’s boy, dressed in a delicate ensemble of shorts, shirt and knee socks, almost identical to those figures found in store windows in 1950s and ’60s. It all sounds innocent enough except this child is nearly six feet tall, a kind of monster that doesn’t reflect well on either children or parents.

Even more unsettling is “Family Romance,” a four-mannequin sculpture of the classic nuclear family — mother, father, sister, brother. The parents have been reduced in size, the children slightly enlarged, so they are all about 4½ feet tall — and naked. Another strange effect is that the scale change makes the children look larger than the parents, suggesting that in too many American families, children grow up too fast, raised by parents who never quite matured.

After a while, this show doesn’t seem so small. Look, read the labels, mull over the prickly unanswered questions many of the pieces leave you with. “Boy With Frog” and “Huck and Jim” were both intended for public display — one in Venice, the other in front of the Whitney — and then pulled back. Perhaps Ray is the best kind of public sculptor, one who wants people to think. He repeatedly sidesteps the expected. As you approach his “Reclining Woman” — a steel figure on a steel block — you gradually see that this art historical trope has been replaced by a very contemporary-looking actual person with squinty eyes, love handles and cellulite and, what’s more, force of personality. “Archangel” (2021), carved by Japanese woodworkers from honey-colored Japanese cypress, has its own everyday attributes — flip-flops, rolled-up jeans and a man bun. But its extreme attenuation is otherworldly, while his raised heel and outstretched arms imply the miracle of flight.

“Sarah Williams,” a stainless steel sculpture also from 2021, is the show’s final work. It returns to Huck and Jim’s antebellum tale, to depict a scene of Jim helping Huck disguise himself as a woman so he can suss out who, at their latest stopover, might threaten their liberty. This time Huck seems incredibly tall, wearing a long gown whose folds fall like the flutes on a column; Jim, kneeling behind him, has been working on the hem. They are both playing roles: a white adolescent in drag and a Black man doing women’s work. And they both seem palpably sad. Huck’s head is bowed; Jim’s face is raised, subtly anguished. Perhaps they sense the conflagration to come — the Civil War, whose tragic business would remain painfully unfinished more than 150 years later.