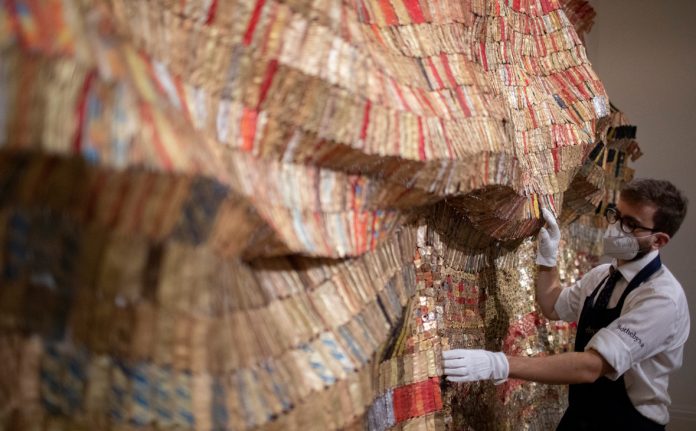 According to the Office of the United States Treasury Department, transactions involving high-value works of art can play a role in the access to the American market and financial system of the sanctioned persons in violation of OFAC decisions, OFAC said in the document. OFAC writes that the lack of transparency and the high degree of anonymity and confidentiality of artwork transactions makes them attractive to those involved in illicit financial activity, including sanctions evasion. Particularly high opacity is noted in the purchase or sale of these objects. In transactions in this often use the front companies or intermediaries – in the acquisition, storage or transfer of money writes OFAC. This allows people operating illegally to hide their true intentions not only from law enforcement and regulators but also from the market as a whole. “The mobility, concealment, and subjective valuation of [high-value artwork] increases their vulnerability to circumventing sanctions,” the office pointed out.

As one example, OFAC cited a report in the U.S. Senate that billionaires Boris and Arkady Rotenberg were linked to shell companies that were involved in the purchase of works of art. The senators claimed in July 2020 that the Rotenberg brothers had already bought 10 paintings for $6.8 million at a Sotheby’s auction after they came under sanctions in 2014. In total, the senators claimed $18.4 million in art purchases from private sellers and auction houses in the United States by three companies that, according to them, are connected to the Rotenberg brothers and Igor Rotenberg’s son Arkady. A spokesman for the Rotenberg’s called the allegations “complete absurdity” and said the businessmen never used any money-laundering or sanctions circumvention tools.

OFAC warned that companies and agents working with works of art can themselves be held civilly liable for violations of the sanctions regime. In this case, the penalty will face even those who did not know or could not know that they are involved in an illegal transaction. To avoid penalties, the U.S. Treasury Department has advised running a program of risk assessment and screening of counterparties. For U.S. citizens who are thinking of dealing with a sanctioned person, OFAC suggested applying for a recommendation or license for the transaction. “OFAC’s decision on a license application will depend on the specific facts and circumstances of the particular proposed transaction,” the statement said.

Like any market, the art market is a system that provides interaction between the seller and the buyer. In this case, the creator of the artwork and its consumer.

But this scheme describes the relationship between art subjects in a very general way. In fact, everything is more complicated, and the path of work from the artist’s studio to a collector’s house, gallery or museum is much more intricate. And over time the importance of the various elements of this market mechanism changes.

The geography of art

First of all, depending on who is the seller of the artwork, it is important to divide the art market into a primary and a secondary market.

In the primary market – where works are offered for sale for the first time – the art dealer is usually considered to be the main seller. Sometimes (much rarer) sells his work the artist himself or a collector, who once received the work from the author and decided to part with it. Among the collectors are many famous people: Elton John, Jack Nicholson, Barack Obama, Steve Martin. But the biggest collectors are usually in the shadows: their names would not say anything to a person who is not professionally engaged in art. Most of them are between the ages of 50-75 (though in recent years due to the rapid growth of startups and the rapid financial success of their founders there are more and more young collectors, but their share is still small). 9% of the biggest art collectors live in China, the same number in Germany, 7% in the UK, but the bulk – more than 25% – live in the United States. This is not surprising: the U.S. is the largest art market in the world, accounting for 44% of the turnover of the entire art market.

If the primary market is responsible for introducing new works of art into circulation, the secondary market ensures the transfer of works from one owner to another. It is this segment is the main art market – its turnover by several orders of magnitude higher than the primary market. And it is entirely dominated by professional intermediaries – people (dealers, marshals) or institutions (auctions and galleries).

World sales of art are divided between the main players in the art market – dealers (including institutional galleries) and auctions – almost equally: last year the public sector (auction sales, including online) accounted for 42% of market turnover, while the non-public sector (dealers and galleries) had 58%. It is worth noting, however, that the gap between the public and private segments has increased over the year: in 2018, auctions accounted for 46%, while galleries and dealers accounted for 54%. It’s the nonpublic deals that are growing faster today: in 2019, transactions in the gallery and private dealer sector reached $36.8 billion, up 2% from 2018, while aggregate public auction sales fell 17% to $24.2 billion for the year.

This is already a trend forcing auction house owners to pay more attention to private sales. For example, private sales at Christie’s, which became the market leader among auction houses in 2019, rose 24% year-on-year to $811 million, while public sales fell 19% to $4.9 billion. Sotheby’s is doing similarly: while public sales show a negative trend ($4.8 billion for 2019 – down 9% from 2018), private at least is not falling (about $1 billion). Sotheby’s private sales accounted for 17% of its total revenue in 2019, the highest since 2013. Chinese auctions Poly Auction and China Guardian, ranked No. 3 and No. 4 in the world by sales volume, provided no data on private transactions, and their public sales, like their competitors, fell to $1.1 billion (-8%) and $952 million (-9%), respectively. And Philips, which closes the top five auctions, shows the non-public sector in a particularly favorable light – a solid 34% increase in private sales (to $172 million) against an 8% drop in public sales (to $736 million) looks very compelling. Although in absolute numbers, public auction sales are still seriously outnumbered by private sales, the trend of increased demand for non-public deals is unmistakable.

As for the galleries, the advantage in the market today have large-scale network projects such as Opera Gallery, David Zwirner, Gagosian Gallery, Hauser & Wirth, Pace, White Cube, Acquavella Galleries, operating in the United States, Britain, Hong Kong, Switzerland and a number of other countries. All of them show rapid growth, and the annual turnover of some of them reaches $1 billion.

Museums at the head of the process

It is believed that since galleries and auctions are the main players in the art market, they have an influence on art prices and their dynamics. This is true, but museums are no less important in this sense, and often (especially recently) their influence on prices is decisive. Many art objects end up in museum collections as they make their way through various institutions (auctions, galleries, collectors), making museums the largest buyers in the art market. This status allows them to dictate their own rules, for example, not to accept a gift from a collector, considering its cultural value insufficient. So if a work of art is expensive, it is not in the least because it is museums that have appreciated its artistic value. And despite the fact that the art market is transforming over time, museums are unlikely to lose their dominant position.

In Pictures: Before V.R., There Was M.C. Escher—See the Graphic Artist’s Mindbending Work on View in Houston