The Metropolitan Museum of Art has acquired Rashid Johnson’s 2019 mixed-media work The Broken Five, which debuted at the artist’s solo exhibition at Hauser & Wirth in New York that same year. The piece has not been on view since that showing, and it is the first unique work by Johnson to enter the institution’s collection, following its acquisition of an untitled etching by the artist from 2015.

Johnson announced the Met’s latest acquisition of his work in an Instagram post this week, writing, “It was a real joy to see my work, The Broken Five, recently acquired by and exhibited at the Metropolitan Museum.” The Broken Five, which incorporates ceramic, mirrored glass, spray paint, black soap, and other materials, has recently gone on view in a suite of galleries on the museum’s second floor where works by Jackson Pollock, Sam Gilliam, Joan Mitchell, Willem de Kooning, and other marquee names of the postwar era hang alongside abstract works by artists of more recent generations.

The Met has been working on buying The Broken Five since it went on view at Hauser & Wirth. The pandemic has slowed the acquisition process somewhat, and the museum is still finalizing the purchase. Ian Alteveer, a curator of modern and contemporary art at the Met who played an integral role in the acquisition, told ARTnews that the work represents the artist in the collection “in a really impactful and robust way.” 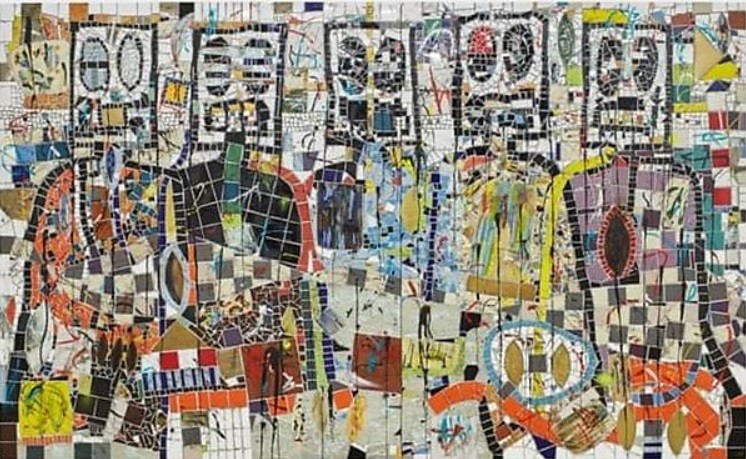 Alteveer continued, “It is a kind of kaleidoscopic vision that incorporates so much of [Johnson’s] practice today—something that is a painting and a sculpture all at once. The Broken Five is a wall relief that carries with it all this weight of history in his work but also speaks to the emergence over the past six years of these ‘anxious’ and ‘broken’ figures in the practice.”

The curator said the five figures that make up the piece’s composition have a “semi-autobiographical” quality to them. The work as a whole also addresses how the world bears witness to issues of racial justice, police violence, environmental crises, and other socio-political concerns.

According to Alteveer, the acquisition also aligns with the collection’s “deep interest in augmenting and centering Black artists,” which “is a tradition we’ve been building on, I think really successfully, in recent years,” said.

The Broken Five will remain on view in the coming months, and Alteveer pointed out that one of the images of the work that Johnson posted to Instagram features Gilliam’s 1968 Carousel State, an unstretched acrylic on canvas painting affixed to the wall.

“Those two works, fifty years apart from each other, hang so beautifully together and share some of the same traditions about questioning and running with modes of abstraction to speak to all kinds of different contexts and stories,” Alteveer said.

The mosaic is made from handmade ceramics, wood, brass, oyster shells, spray paint, wax, soap, and mirrors. Located at 200 Liberty Street, Brookfield Place, visitors will be able to admire Johnson’s unusual ornament installed at the lobby entrance. The building’s glass facade also allows a good view of the building from the surrounding streets. 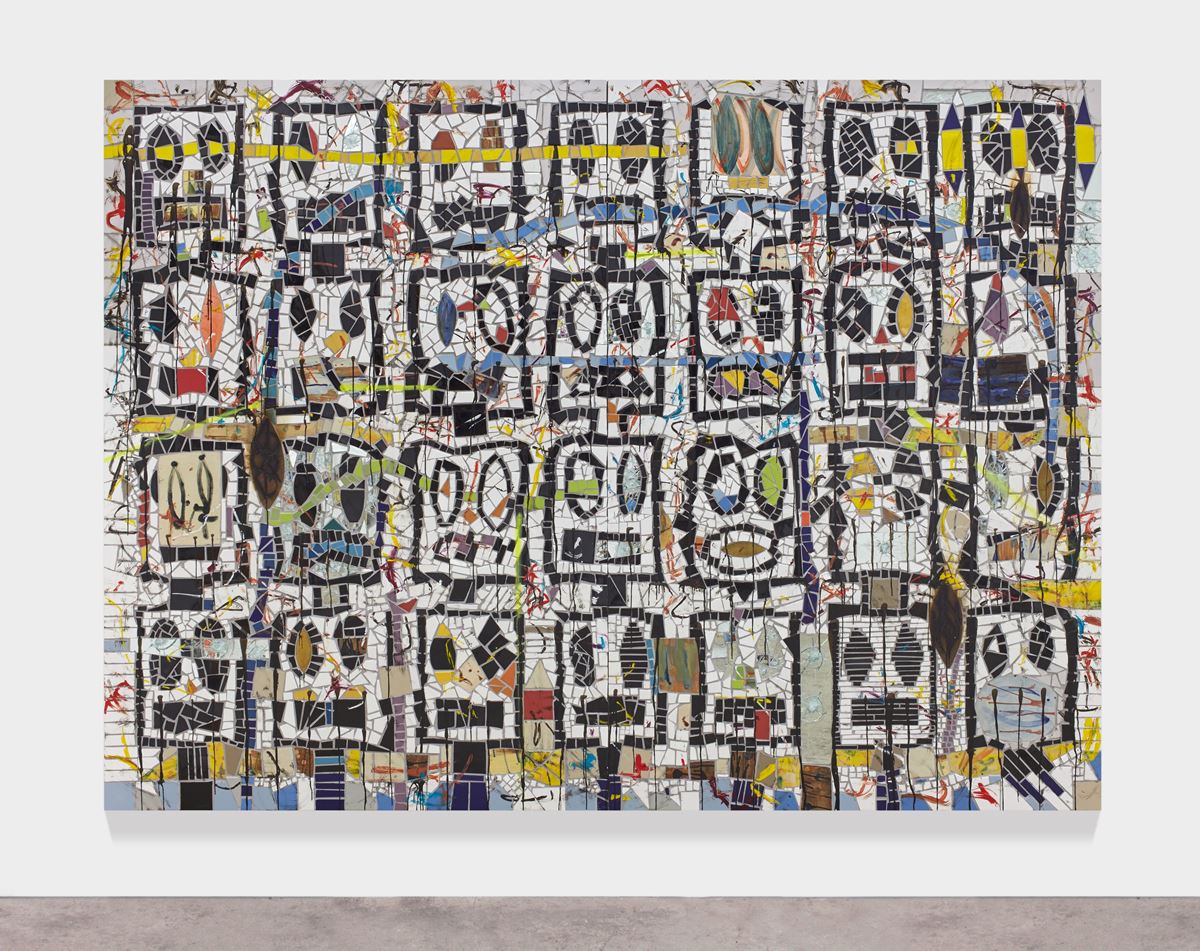 Rashid Johnson (1977), the American conceptual artist, is one of the most brilliant authors in the “on the rise” status of his career. He works in the genre of Post-Black Art, showing through a synthesis of historical, cultural, and material intersections the inseparability of African-American history and world art history. The main directions are painting, sculpture and photography. When creating objects, he uses a wide variety of materials from everyday life, from wood and ceramic tiles to living plants and radio parts. The most recognizable combination of materials with which Rashid Johnson is associated is a mixture of wax and black soap, which he applies to canvas, creating three-dimensional compositions. The artists names Joseph Beuys, Bruce Conner, Joseph Cornell, Carl Andre, David Hammons, and Kazimir Malevich as his creative teachers. The main gallery representing the author is Hauser & Wirth (Zurich, London, New York, Los Angeles).

– Johnson is a representative of the “Chicago school”: it refers both to the system of art education and the art market (remember that the main art fairs in the United States before Art Basel in Miami Beach were held not in New York or Los Angeles, but precisely in Chicago).

– The artist’s father was an amateur radio operator and owner of a radio electronics workshop, and his mother worked as a teacher of African history. By Johnson’s own admission, he grew up between his father’s workshop and his mother’s library, which shaped his life principles and views on art.

– Contrary to some sources, Rashid Johnson did not study at the most prestigious art school in the United States, the Art Institute of Chicago, but he did graduate from two art schools in his neighborhood: Columbia College Chicago (2000) and the University of Chicago School of Art (2005).

– As a student at the latter institution, the young artist was spotted and selected to participate in the high-profile group exhibition Freestyle, at the Studio Museum in Harlem (New York, 2001). It was after this that the young generation of African-American artists established the genre of Post-Black Art.

– Between graduation (2005) and Johnson’s decision to move to New York (2008), there were several momentous events that influenced the acceleration of the young artist’s career – in particular, contemporary conceptual art entered the blue-chip market through the $12 million sale of a famous work by Damien Hirst, Don Thompson’s book “Scarecrow Shark for $12 million” was written and published, and the volume of art sales in the world market showed a historic high by the end of 2007 (and at the expense of contemporary art). Rashid packed up and moved to the capital of the world art market.

– An important point: at the beginning of his conquest of New York Rashid Johnson had already had 8 solo exhibitions, five in Chicago and one in Washington, Magdeburg (Germany) and Naples (Italy). He has managed to take part in 23 group exhibitions and entered the prestigious private Rubell Family Collection in Miami. AI’s own sources attribute this growth to the David Kordansky Gallery of Los Angeles: it did not have its own space in New York, but the desire to work with the East Coast market through an active artist did, and quite a bit.

– In 2011 two events occurred in Rashid Johnson’s career that took him to a new level: Bice Curiger, the curator of the 54th Venice Biennale invited the young (33 years) artist to the main project, and the author signed his first serious contract with a top gallery of Hauser & Wirth.

– The patronage of Hauser & Wirth has slightly refocused Rashid Johnson’s marketing activities: now he has begun to pay more attention to international competitions and residencies, and institutional exhibitions have begun to take place in good quality museums in countries with wealthy local collectors, such as Mexico, South Africa, China and Scandinavian countries.

– It is interesting to note that at the same time as Johnson, Hauser & Wirth signed a contract in 2011 with another author, the British sculptor Thomas Hausigo. According to ArtTactic, he is now number 6 in the market’s ranking of confidence in the long-term prospects of young artists (we’ll be sure to write about him in due course).

According to Artfacts, to date, the artist has held 44 solo and participated in 185 group exhibitions (4 of which were scheduled for 2020 but have been postponed), 9 international biennials, and at least 22 art fairs. He is represented on a non-exclusive basis by 18 galleries and private dealers, among which the main one is the international network Hauser & Wirth (collaborating since 2011). The artist’s work is in prestigious museum collections, including New York’s MoMA Museum of Modern Art, the Solomon R. Guggenheim Museum, the Whitney Museum of American Art (both in New York), the Art Institute of Chicago, and in prestigious corporate and private collections, such as the Louis Vuitton Foundation (Paris) and the Zabludowicz Collection (London).

Interest in Johnson’s work in the auction market increased significantly in 2019, with sales at Christie’s, Sotheby’s, and Phillips in London and New York totaling $2.98 million, 578% more than his public sales in 2018. In May 2019, a new record was set for the artist at Sotheby’s in New York: the work Escape Collage sold for $950,000 (value without buyer’s commission), a 31.9% increase over his second-highest auction sale (November 2019, Christie’s, New York).

Rashid Johnson and the Trust Indicator

Rashid Johnson is solely in the lead in the ranking of young contemporary artists, which respondents ArtTactic predicts a stable market in the short term: he has 84 points out of a possible 100. However, the gap from the nearest pursuer in the ranking is insignificant, the Afro-British Lynette Yadom Boakye (represented by Jack Shainman Gallery) – 82 points. At the same time, Lynette overtook Rashid in the long run: according to market participants, she has a better chance in the next 10 years (49 vs. 41).

In 2020, Johnson’s works were put up for auction six times, sold 100% of the lots for a total of $198.5 thousand. Among the formats of works twice were paintings and circulation photography, once – installation and graphics on paper. It should be noted that both paintings were made in the author’s technique using frozen soap. The average estimate of all sold works was exceeded by 169% – in other words, the sellers received an average of 1.69 times the original estimate of the auction house. In this case, exceeding the upper limit of the estimate recorded in four of the six sales (67%).

Johnson’s most recent work during the quarantine, Untitled Anxious Red Drawings, was exhibited online in the Hauser & Wirth virtual gallery and sold out within days. In addition to the traditional video from the artist’s studio in recent months, bringing the author closer to the customer, you can find many other interesting marketing moves in the online cabinet – from the tracklist to which Rashid Johnson created a series of works, to the artist’s recommendations on nutrition, as well as free “exclusive” background images for video conferences Zoom.

The protests against racial discrimination that began in June 2020 in the United States have put African-American artists (especially those associated with large international chain galleries) in a twofold position. On the one hand, the Post-Black Art movement itself emerged as a symbol of the blurring of distinctions between people, including in art, but on the other hand, it is now, at a time of conflict, that these distinctions are more evident than ever. There is more: major museums have never welcomed politics in art, especially events from contemporary rather than historical chronicles, which can be remembered and analyzed after the time (think of the exhibition at the Royal Academy of Arts in London devoted to the centennial of the October Revolution in 2017: it was planned long before the sanctions against Russia and turned out to be as historically-neutral as possible). On the third hand, the U.S. art market is traditionally supported by the Democratic Party, which has taken the side of the protesters. Consequently, figures in the art world must also express support for popular discontent in order to remain “in the market. Which of these factors will be decisive in African-American artists’ choice of position? We see the most reasonable and peaceful position as that of art parliamentarians, able to reconcile both sides, to bring calm back to the streets, and to put the lessons learned from the events of recent days into people’s heads and hearts.